Stocks continued their downward trend this week but the move was muted by an overreaction to 4th quarter GDP numbers that were released on Thursday. Growth for the fourth quarter 2013 was announced to be an annual pace of 3.2% in Real terms.

Growth for the year of came in at just 1.3% – a paltry level at best. Indeed, the second half of 2013 grew at a much faster pace than the first half did – but so what? The year stunk in growth terms.

But even so, the Dow reversed its losing course and gained 110 points on Thursday. The gain, however, was short lived. After giving up 150 points on the last trading day of the week the Dow ended another 1% lighter than the week before. Stock market strength via the 15-51 Indicator lost 5%; and gold pared some its gains but continued to be positive for the year. 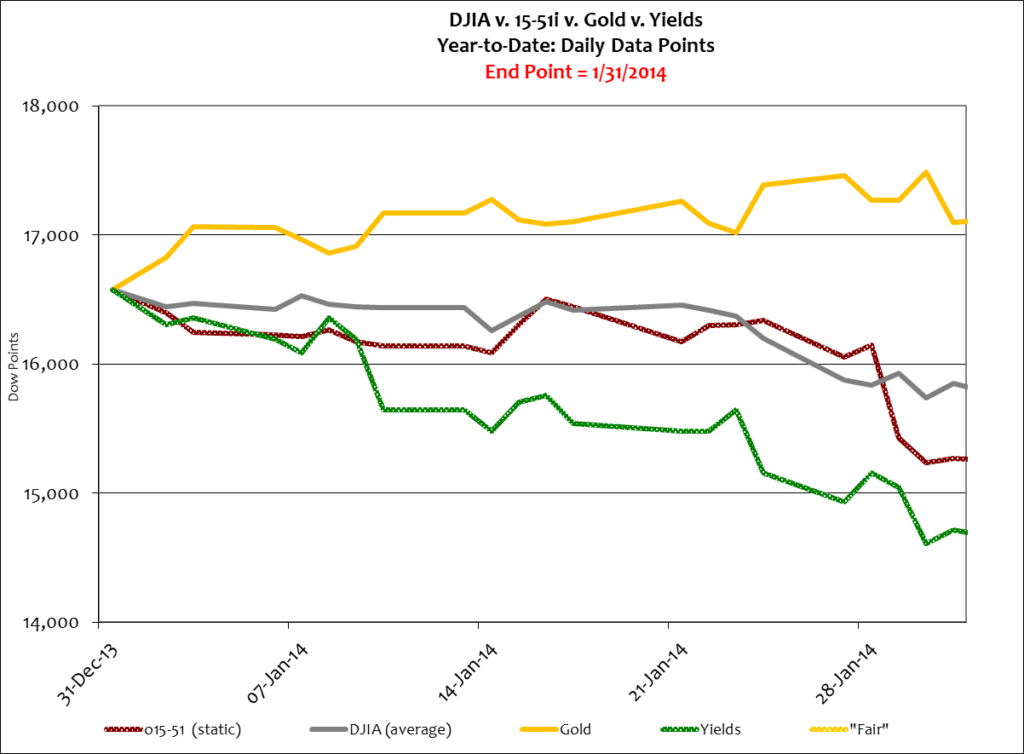 Also this week the Federal Reserve announced another reduction to the monthly level of quantitative easing (QE), which going forward will be $65 billion per month – still a lot of money. While a drop in QE should bring about a rise in yields, that rise doesn’t necessarily have to occur at the time of QE announcement. Recently, yields have been tempered by two things.

First, stock markets are jittery. When stocks are irrationally exuberant like they currently are it takes only little things to reallocate money from high risk stocks to safety – like renewed trouble in already struggling emerging markets.

The effect of this is relatively simple to swallow. Fund managers, scared of a big stock sell-off, instinctively lower their high risk stock market allocations in favor of safety and security – a.k.a. U.S. Treasury securities. This move causes stock prices and yields to fall, as greater demand for bonds forces their value higher and their yields lower, because less interest is required to entice investors into buying them, because they are buying them for security instead of interest income.

That’s one reason yields are falling along with another drop in QE.

A second reason for the move is that while the Federal Reserve is cutting one monetary tool (QE) it is employing a new one called Reverse Repurchase Agreements, or Reverse Repo, or RRP, for short. The program is still in its infancy, as testing only began in September 2013.

In the case of Reverse Repos the Federal Reserve sells some of its assets (like U.S. Treasuries and/or toxic asset-backed securities it acquired through QE) to counterparties (like banks, money market funds, and government sponsored enterprises like Fannie Mae and Freddie Mac) with an agreement to purchase those same securities back in the future. The difference between the sales price and the repayment is the effective interest rate, and since most RRP’s are short-term in nature, they essentially define the short-term borrowing rate.

The RRP is expected to someday replace the Federal Funds Rate of interest for short term bank investments.

As mentioned many times previously, QE has injected trillions of dollars into the financial system. The problem with that money is that it hasn’t reached the Market level – which is the reason QE has failed to get the economy going.

But that new money hasn’t disappeared, and is still on-hand at big American banks, laying idle in regard to the American economy, and instead invested in stocks and/or sovereign foreign debt.

QE money hasn’t been applied to the economic base or invested in growth and/or expansion for the simple reason that interest rates have been too low for too long. Banks simply don’t have the incentive to lend in any great extent. So they don’t. And because of this dynamic, there is a lot of excess liquidity in the financial system.

Traditionally, when the Federal Reserve wants to remove cash from the financial system it sells Treasury securities and receives cash back for the sale. It’s a straight up sale for cash, where the cash proceeds received by the Federal Reserve remain at the Fed, and thus removed from circulation in the marketplace. A tightening of money generally causes interest rates to rise.

The Fed’s QE program has injected several trillions of dollars of new money into the financial system and most of it has remained at the bank level. As interest rates rise that money will be shifted from expensive, risky, or non-earnings assets to higher interest collateralized loans. This will create a wave of market activity. As a result, there will be a time when the Federal Reserve will have to remove some of the QE money from circulation to avoid an environment of spiking yields and hyper-inflation.

So to remove this new money gracefully, the Fed can’t operate the way it normally has in the past – QE has changed that dynamic. For instance, during QE the Fed prints new money and exchanges it for some value of “toxic” assets leftover from the last financial crisis. Banks get new cash, and the Fed gets some crappy investments. Banks get healthier automatically because they end-up with less crap and more available cash to invest – which they do – ergo stock market inflation.

So now the Fed has a ton of crappy assets on its balance sheet, and as always, a bunch of U.S. Treasury securities. The Fed can’t sell toxic assets back to the banks they were purchased from because that will make those banks more vulnerable and risky, and thus raise interest rates without intention. It also can’t flood the market with U.S. Treasury securities, as the increased supply will cause bond values to fall and yields to rise.

So how does the Fed liquidate these bad assets – or more importantly: How does the Fed remove all of the excess cash from the financial system without causing runaway interest rates and inflation?

The Federal Reserve has conjured up a new “tool” to parlay in the worldwide monetary shell game – and it’s called the Reverse Repo. This transaction allows the Fed to temporarily rid itself from toxic assets while banks pay them some modicum of interest for the associated risk (remember, the Federal Reserve has the only printing press for American dollars, and as such, it will never run out of money, and therefore, can always borrow money at the lowest rate of interest – even below the U.S. Treasury.)

The tests conducted for RRP’s have thus far been termed “successful” by the Federal Reserve. That’s great, right?

The cynic doesn’t easily forget that the brain-trust at the Federal Reserve totally missed the last “financial crisis” and also failed to see the stock market bubble it created with QE. So while initial results of the Reverse Repo in this optimal environment have proved “successful”, testing has done little to forecast effectiveness during the adversity real world dynamics bring.

For instance, in a world with rising interest rates and escalating inflation – why, let me ask, would banks want to buy low interest products from the Federal Reserve when they can lend those same investment dollars to the marketplace at much higher rates of interest?

Why would they do this?

Indeed, the Fed wants low interest rates and the Reverse Repo is one way to achieve them – especially when inflation is at historic lows. But banks want higher rates of interest – and the economy needs them. Therein lay the dichotomy.

This Reverse Repo thing has just started to evolve, but it’s something to watch – because, as we know, reality has a habit of throwing a wrench into great new governmental theories.