Stocks regained some upward momentum last week as stock market strength gained 2.5% and the average added 1.4%. Gold has quietly risen 10% from its 52 week low set just a couple of months ago. And while the recent ten-point pop might not take all the sting away from the gold correction, it did serve as a wake-up call to many investors, short-sellers, and media pundits.

Even though gold has consistently gone down in the last few years nothing has changed with its market condition. Long term investors with a perceptive understanding about the condition of money and debt could just as easily purchase gold now as when it hit its all-time high in August 2011, when the price reached $1,814 an ounce and the GLD was at $182 per share. In fact, the basis to purchase gold now or at its high is the same exact reasoning for not buying bonds during the same time. See below. 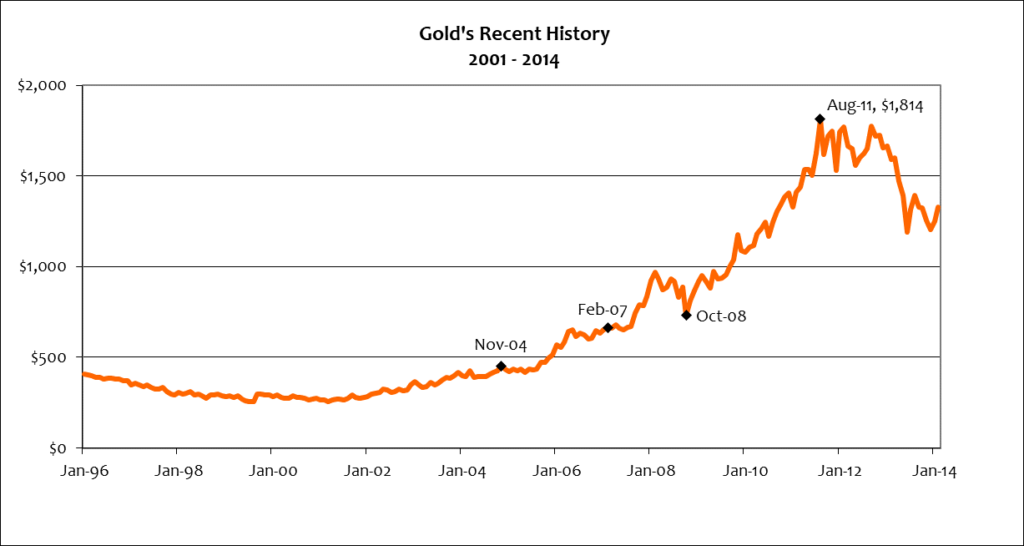 Conditions that are bad for money are also bad for debt because debt is only borrowed money. Those same conditions happen to be good for gold. Yet bond values and gold have traveled a strangely similar trend-line in the last two years. That’s because of QE, which has been forcing yields down and stock and bond values up. The decline in gold is a byproduct of that dynamic.

Most don’t people don’t remember or appreciate that the housing-boom was a Clinton initiative. Affordable home ownership was part of his political platform when he ran for president. Then Federal Reserve chairman Alan Greenspan implemented a cheap and easy money policy to aid President Clinton in achieving that objective.

The problem was that Greenspan waited too long to tighten money, and then when he finally did it was perhaps the worst time to do so. He totally mismanaged the money supply during this time, and it sill confounds me how he escaped public ridicule in the wake of the ’08 crash. And yes, I understand the logic to his policy stance back then.

The economy was growing briskly, the tech-boom was in heat, and Clinton won another term. In time Clinton made good on some campaign promises and raised taxes (a tightening of free-market money supply so that monetary policy could remain loose) and greatly expanded the CRA and resources to Fannie Mae and Freddie Mac to facilitate the underwriting of subprime mortgages to lower income people.

Fannie and Freddie then used their newly granted capabilities to pass high risk debt to Wall Street banks, who then cut them up and bundled them into some kind of marketable security that nobody quite understood – but everybody had to have. They were bundles of synthetic securities, backed by American land and a federal guarantee against default, which were commonly referred to as “asset-backed securities.”

At the time asset-backed securities gained steam the investment markets were going crazy; everything went up, all the time. The tech-boom was creating all sorts of new wealth that made taking greater risks easier to do. This high action, even to a watchful eye, acted as a smoke-screen to the major threats brewing in the financial industry. And even though Greenspan was the one toiling the potion, he totally miscalculated the boiling point.

The Federal Reserve monitors and regulates all banking activity in the U.S., including Fannie Mae and Freddie Mac. He should have made synthetic land-backed securities illegal, and if it was outside of the Fed’s authority, Greenspan should have alerted the public and pressed Congress to do it. These fake securities were the poison that Wall Street OD’d on and ultimately crashed the financial markets in ’08; and sadly, are still legal to exist today – no thanks to Dodd-Frank.

While it was prudent for investors to enter the gold market early in the late 1990’s, building a gold allocation became much easier to do in November 2004, when gold was securitized and traded like a stock under the GLD symbol. This enhanced access helped fuel the 21st century gold rush, which took off in earnest in 2006, when the housing-boom and cheap and easy money were in full gear. See below. 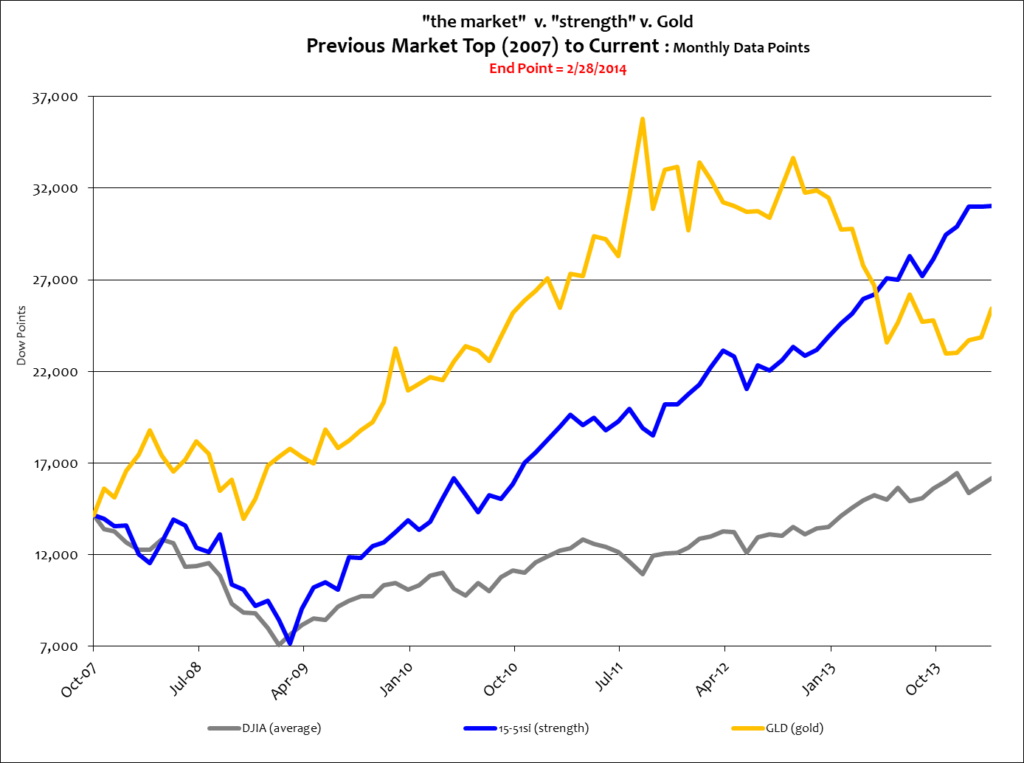 It has been previously demonstrated here how gold has been a leading stock market indicator since sloppy monetary policy became standard operating procedure in the U.S. Gold has routinely peaked and corrected several months in advance of stocks (see noted dates above.)

Gold hit its all-time high in September 2011 when news of another monetary crisis dominated the news, this one coming from overseas (Italy, Greece, Spain, Portugal, etc.) And when all that went away*, gold corrected to the downside and stocks went on a boom-like run. (*PS: I’m just being facetious here. The overseas financial crisis really didn’t go away. It was just postponed – and then removed from the news cycle.)

The reasons for having a gold allocation haven’t changed since the late 1990’s. The value of the dollar has been slipping ever since, and so gold remains perfectly positioned to capitalize on the bursting of the QE-bubble. Such an event will greatly diminish the value of money and debt and cripple global enterprise; a bad condition for stocks and bonds, but ripe for gold.

These are not the times to take more risk than you can comfortably afford. Cash is still king – especially when considering recent developments…

Fourth quarter 2013 GDP was revised sharply lower to 2.4% from 3.2%, and those fractions add up to big bucks when relating to a $17 trillion economy. The original estimate seemed high at the time because it wasn’t consistent with the soft holiday message retailers were reporting. The revised estimate still feels high to me.

In other news President Obama recently released a $3.9 trillion budget that adds about $600 billion to the national deficit. In the same memo, Obama said deficits will return to pre-crisis levels by 2018 – two years after he leaves office. That’s way too late! National debt will climb to over $20 trillion by that time. It’s totally irresponsible, and quite piggish. Spend, spend, spend, and then leave the tab for someone else to deal with.

In my neck of the woods that’s called a fink.

Perhaps that’s why Russian president Vladimir Putin has absolutely no respect for him. Obama can’t face the tough issues, and is getting totally outplayed at the game of life in the real world, where the big boys play. Obama is a spendthrift that is otherwise all talk and no action, or as an old southern epitaph would describe: a man with a Big hat and no cattle.

And the world knows it.

Take the situation in the Ukraine as an example. The European Union was aggressively negotiating with the Ukraine to join the EU. As we know the EU is dominated by Germany, the economic powerhouse and financier of the region. In other words, Germany spreads her wealth to attract new members to the territorial union it controls. And just as a deal to acquire Ukrainian membership was about to come to fruition, Ukrainian president Viktor Yanukovych took the deal to Russia – who then beat the EU’s offer, which was then accepted by Yanukovych.

The Ukrainian people overwhelmingly wanted to join the EU and thereby push themselves further away from Russian dominance. Mass protests took to the capital streets of Kiev and ultimately resulted in the ousting of President Viktor Yanukovych, a Russian sympathizer.

Once the capital was seized a well-organized opposition turned their sights to the critical port region of Ukraine called, Crimea – where the Russian Navy maintains a base and fleet. Crimea has a significant Russian population.

About ten seconds after President Obama warned Russian leader Vladimir Putin not to get involved in Crimea, Putin pushed his parliament to approve military action there. Russia took control of the Crimean region in short order and without a single shot being fired, where a standoff between the two militaries is ongoing.

When will Russia stop its advance?—and what kind of duress will it take?

This is not good for America and free-markets.

And you know things are that bad when a virtual (a.k.a. fake) currency like Bitcoins can attract enough money to screw the world out of a half-billion dollars overnight. Virtual currencies like Bitcoins are meant to be a Shangri-La of money markets, where free people determine fair value through free internet trade or exchange. But here is where they fail: they are run by two-bit conmen looking to scam people who are desperate to sidestep currency manipulation by central governments.

No reason to be lost in this horizon. There is no substantial base-value supporting virtual currencies. They’re a ponzi scheme. And the only people who should be buying into the Bitcoin craze are fools comfortable, willing, and able to put their entire home’s value on the color green at a Vegas roulette table. It’s a long-shot gamble, plain and simple.

So stay away from all virtual currencies like Bitcoins. The global market isn’t ready for them, and England’s intention to tax them is completely misplaced. Applying a tax to Bitcoins implies that they are a legitimate, credible good or payment tender. And they’re not.

Buying gold today at $1,800 an ounce (a $500 premium above its current price) is a much better move. It’s safer, has more intrinsic value, and has a brighter future.

In short, stocks remain “high,” gold is “fair,” America is weak, and the world is a mess.