Gold continued to move higher last week as stocks made a U-turn to the downside. The Dow Average is down 3% so far this year, and 15-51 strength has peeled off 2% from its prior year-end. But gold is the story; up 15% year-to-date. The chart below spans a very short time period (just the 11 weeks so far this year) but I think it helps make a clear point about the current market dynamic. 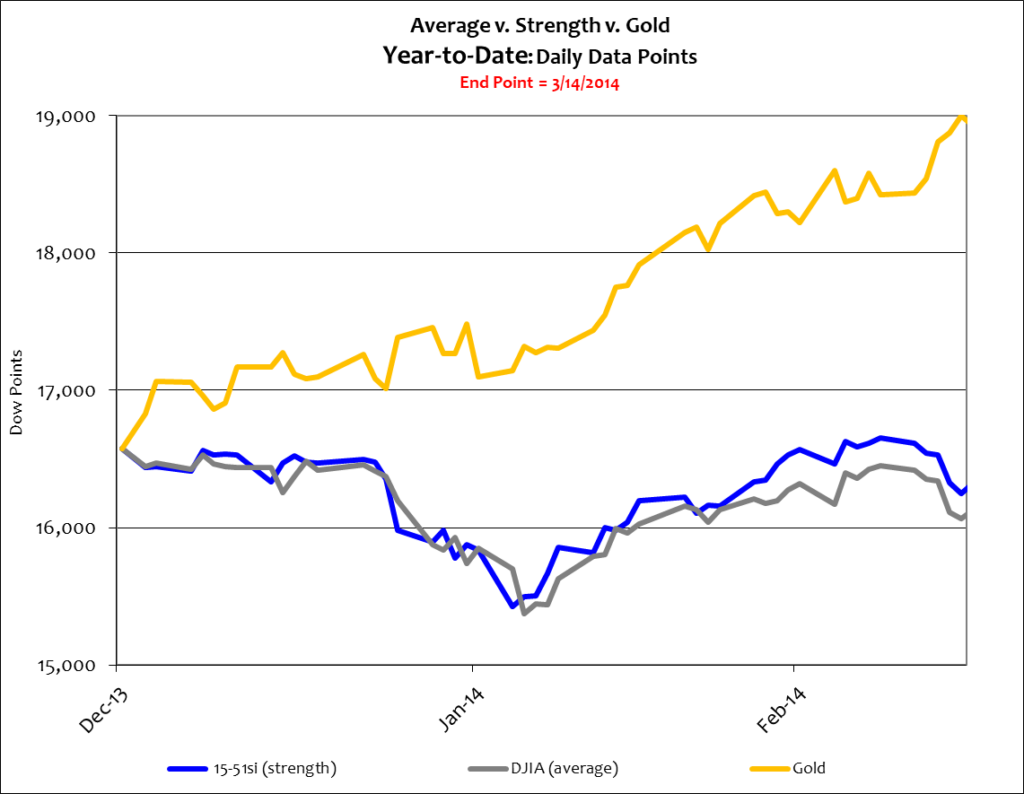 In times of low inflation and solid economic growth, stocks and yields should move together higher, while gold goes lower. That’s opposite the movements shown above. And the reason for that is quite simple: the economy isn’t producing solid, stable growth despite historically low interest rates and inflation.

That’s what makes the stock market so over-valued at these levels. It’s being valued as if the economy is steady and growth is solid – which it’s not. Growth is weak and uneven at best, and the global economy is fragile. QE, not economic performance, is artificially driving stock market gains and yields lower.

Let’s widen the viewpoint for further discussion. Below is market activity for the most recent twelve months. 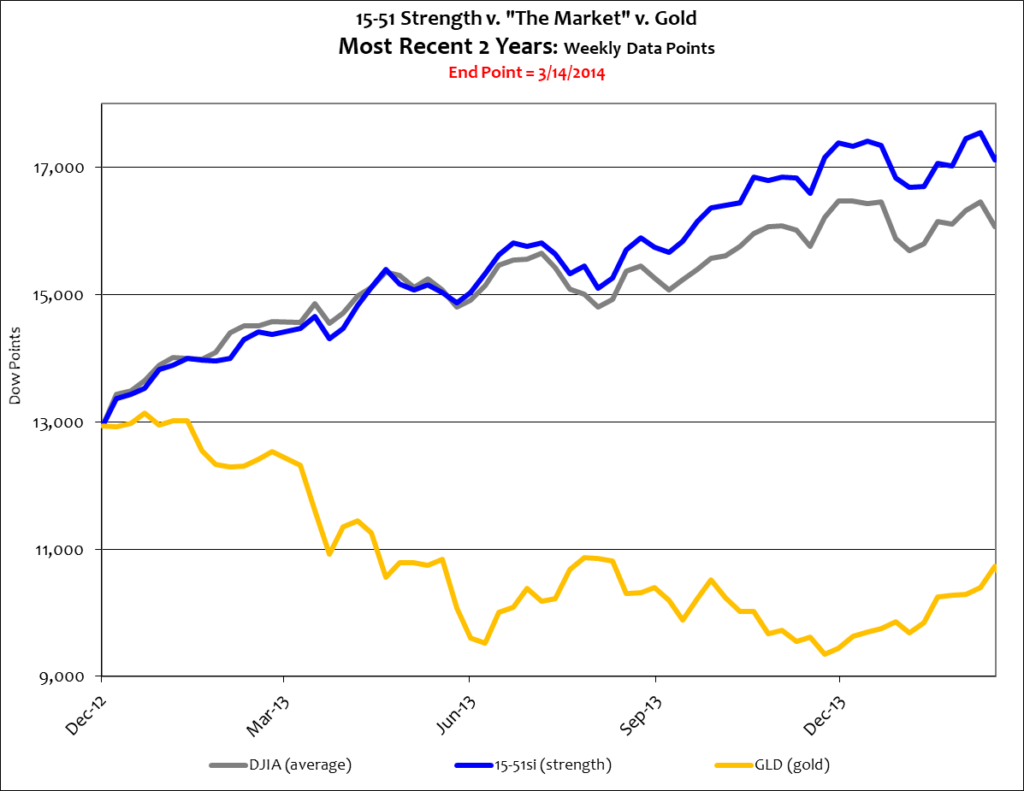 Stock movements during this time look relatively mute, but that’s an illusion. The Dow Average added 10.5% and 15-51 Strength gained 19% – two solid twelve-month performances. Gold’s movement appears fairly moderate as well, but it’s down double-digits (14%) even with its recent 15% upward tick.

Those moves are downplayed in the chart because of the dramatic move in yields during the year, which caused the chart’s scale to widen. The 10-year yield went from 1.85% to 2.64% in this time – a 42% move to the upside, and four times the rate of growth for the stock market average. While the move in yields is large, interest rates are still historically low at 264 basis points for the 10-year Note; so the move in yields must be taken for what it’s worth – inconsequential in the grand scheme of things.

Nevertheless, the current market trend held true: stocks and yields in one direction (up) and gold in the other (down). This pattern can be mistaken to signal a strong economy. Below is the same chart but without yields shown. 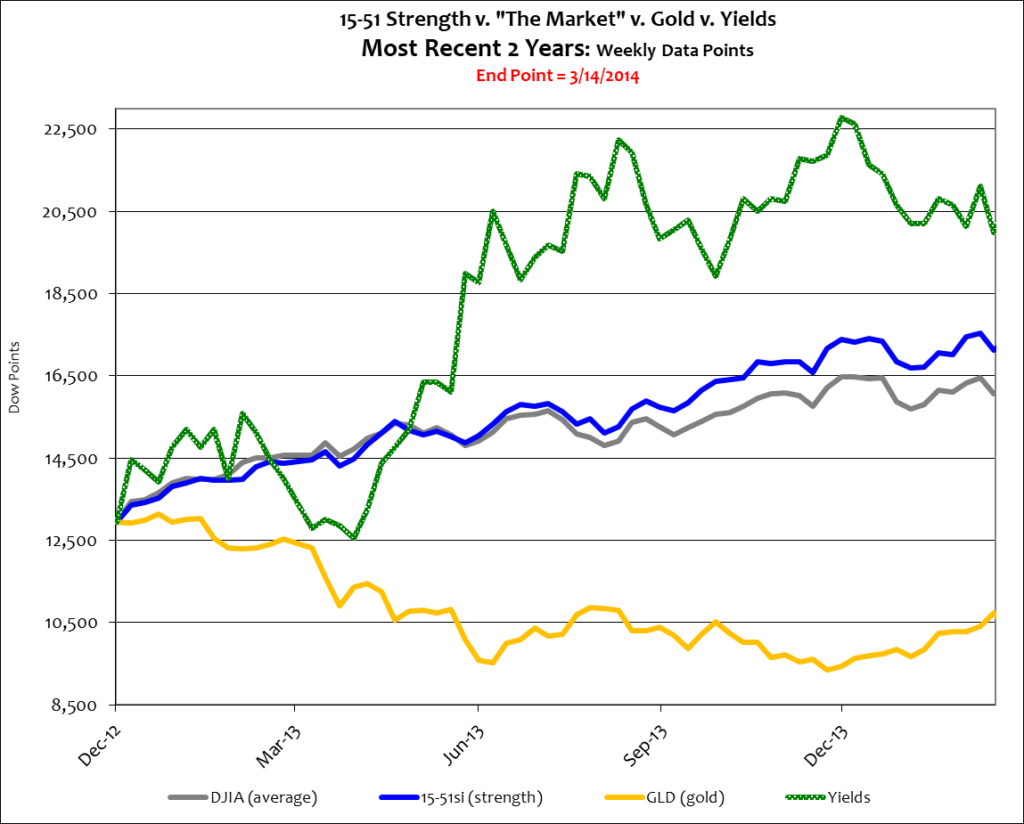 People thinking that movements in the stock market and gold are reflective of a strong economy are drinking from the wrong teacup. If a real and legitimate boom was going on the Dow Jones Industrial Average would have no problem trading above 19,000 – three thousand points above its current valuation (16,066); QE would have been long gone, and yields would be much higher than they are today. In addition, the action zone high point as depicted in the chart would also be higher than its current level (15,652), as economic output factors greatly into its calculation. But that’s not the case. No economic boom exists.

The point is: Markets, and their according dynamics, change fluidly.

For instance, stocks and yields haven’t always moved together, just as gold wasn’t always on the opposite side of their coin. A widening view of the time period illustrates this clearly. See below. 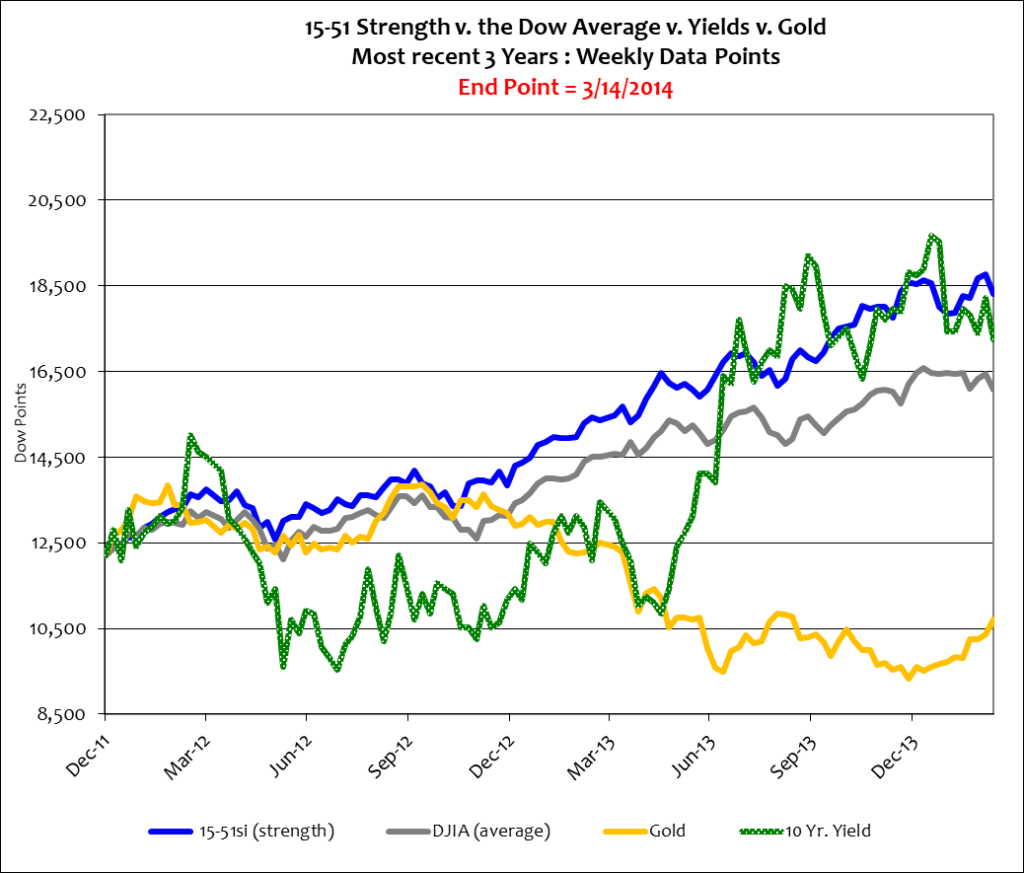 For a time in 2011, stocks and gold moved higher and it was yields that took a different downward path. That dynamic started to change in the fourth quarter of 2012; at which time gold began to correct in earnest, and yields joined stocks and moved higher.

Case in point: When the condition of the Market changes so will “the market” dynamic.

For example, should the ugly face of inflation present itself both gold and yields would begin moving together to the upside, while stocks would head lower. The reasoning is logical. Inflation is the cost of money, and when that increases so does the cost of debt (which is simply borrowed money.) Inflation steals value from paper money and makes precious metals worth more; and because of this, lenders demand higher rates of interest to cover the declining dollar.

I guess what I’m trying to say is that the market is in constant motion, with constant change. As Market conditions change so do market dynamics. Below is an even longer-term view. 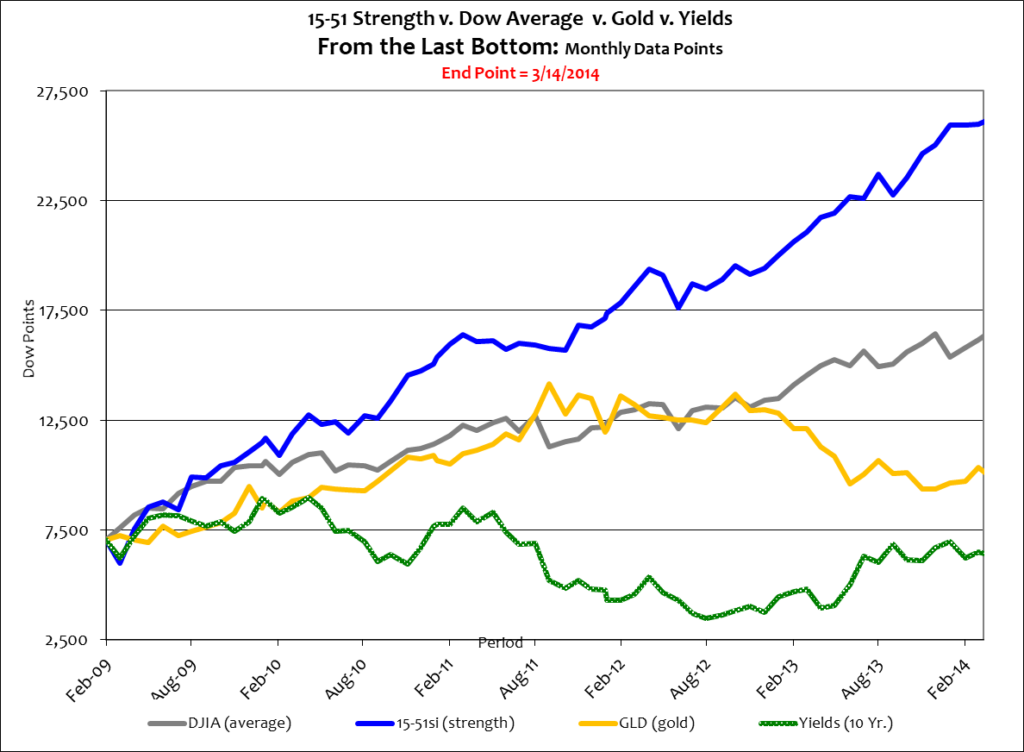 Yields went nowhere but down during the time period shown above but aren’t included in the chart. Showing a yield trend would widen the chart’s scale so far that it would flatten the Dow’s trend-line so dramatically that it would render the chart useless. Without that distraction the chart makes the long term trend easy to see: Gold and stock market Strength have long been running the same upward path. The Dow is up, but meagerly – just like the economy.

Unlike gold, stocks have yet to correct since ’08 crash. They are extremely inflated, which is highlighted quite clearly with the performance of the 15-51 strength indicator, which gained an amazing 116% during the time shown above. The Dow Average added just 13% since hitting its previous all-time high in October 2007, which is a tad bit shy of the pace set by Nominal GDP. It’s a pathetic Dow performance if you really think about it, but it’s over-valued nevertheless. It’s just harder to see.

The over-valued condition of stocks can be tied directly to QE.

QE is a tool the Federal Reserve uses to service the debt obligations created by American central government. The Fed keeps yields low by printing new money to purchase the excess supply of U.S. Treasury securities left on the market. This easy money transfer gives government more room to incur greater annual deficits (as interest rates are low and the Fed is the largest buyer of U.S. debt.)

Remember, only half of the QE money goes to the purchase of the U.S. Treasury securities. The rest remains in the coffers of large Wall Street banks. And what do you think they do with it? They invest it – ergo, stock market inflation.

And by purchasing U.S. Treasury debt in such dramatic fashion, the Federal Reserve facilitates greater fiscal deficits created by the boys and girls in Washington DC. This action temporarily inflates GDP like a balloon.

Think about it. President Obama’s most recent budget calls for $4 trillion of spending, an amount approximate to the size of the entire Chinese economy. These high spending levels have contributed to GDP growth, no doubt, but any positive impact is meager, uneven, and fragile. This is due to the poor economic performance produced with the money central government borrowed.

That’s why government spending isn’t worth the investment. Washington DC is made-up of mostly snot-nosed spoiled brats with law degrees who think they know more about capital investment than does free market enterprise. That’s a costly misnomer, as proven by their pathetic long-term track record.

Barack Obama has borrowed $6.5 trillion during his presidency (and has spent $15 trillion in total thus far), and the Federal Reserve has injected another $4 trillion of new money – an unprecedented amount of monetary and fiscal stimulus. And what has that $20 trillion produced? A fragile and jobless recovery burdened by massive national debt and a stock market bubble with no economic base to support it.

Consider the consequence of this to our greatest generation. U.S. government bonds have long been the preferred vehicle used by senior citizens to fund their retirements. That is an impossible avenue to take with persistently low interest rates. So instead senior citizens and fixed income people get forced to chase profit in the volatile and corrupt world of the stock market. That’s blasphemy. Senior citizens should be incentivized to retire safety in U.S. Treasury securities, at an interest rate all Americans can be proud of.

The bottom line is this: the U.S. government is paying 2.5% on a ten year loan that is producing little to no economic benefit or return on investment. That’s embarrassing. Our money shouldn’t be that cheap. It should be worth more – much more.

The problem is that higher yields in America would cause global interest rates to move significantly higher – and that would throw a wrench into the world order. Higher interest rates would act as a pariah to weak socialist countries like Greece, Italy, Portugal, and a host of others. They’d buckle under the pressure, and some would fail.

That’s the major problem with current Fed policy: it’s easier on the world and worse for America.

If anything has been proven by QE it is that the mere injection of money doesn’t automatically produce monetary circulation and economic growth; and that with it congressional debt limits get suspended without impunity.

This continues to be a smoke and mirrors rally, inflated by irresponsible government spending and facilitated by cheap and easy money policy.

The Dow is over-valued because it and GDP are artificially inflated.

And both are due to correct.