Stocks continued their downward slide again last week, as all major stock market indicators ended down another 2%. This is the second time in just a few short months that stocks have made a sharp downward move into the 15,000’s – and again, the scuttlebutt is about China and the price of oil.

What about if consumers save that money? How does that help the economy?

And don’t companies that make products using petroleum based components and packaging save money just like consumers do?—And don’t they also save money by transporting those goods to markets with lower gasoline and diesel prices?—And wouldn’t that help, not hinder, profits and byproduct stock market valuations?

Volatile markets are like full moons on Friday the 13th – they bring out all the crazies and make the apparently intelligent seem somewhat obtuse.

As is the case with China, the drop in oil prices is not the problem but instead a symbol of the problem at large. The reason for the falling value of oil is weak global demand and excess world supply. Indeed the slowdown in China is helping push oil prices lower, but that isn’t the whole story. Europe has been weak and getting weaker for a long time. The U.S. economy has been up and down like its stock market reflects. The rest of Asia, like Japan, has been unable to right their ship since the ’08 crash. And just like those markets, the weakness in oil didn’t transpire over night. It has been in a tailspin for years.

There’s no reason to make this more complicated than it has to be: Wal-Mart is closing 269 stores for poor performance – and most of them are in America. Perhaps it’s easy to shrug off Macys and Gap closing hundreds of stores – but Wal-Mart? Heck, you know things are bad when Wal-Mart is reeling.

And to beat the proverbial dead horse – Shouldn’t the two-plus-year drop in gasoline prices have helped Wal-Mart customers?

There is little doubt that Wal-Mart has been slow to adapt to the changing dynamics of an on-line world, but retail sales fell .1% in the holiday month of December ‘15. That’s not just a company problem; it’s also a systemic problem. To put it plainly, consumers just aren’t spending the savings reaped from falling energy prices. The reason for that is simple: consumers are not optimistic about their future, their employment situation, and their financial status. If they were the economic trend would be much stronger, plain and simple.

Instead the stock market is reacting negatively to the Market incongruity of high valuations and tepid economic growth – a condition that has lingered for way too long. The only difference now is that institutional investors have woken up and smelled the coffee – for the second time in just a few months. See below. 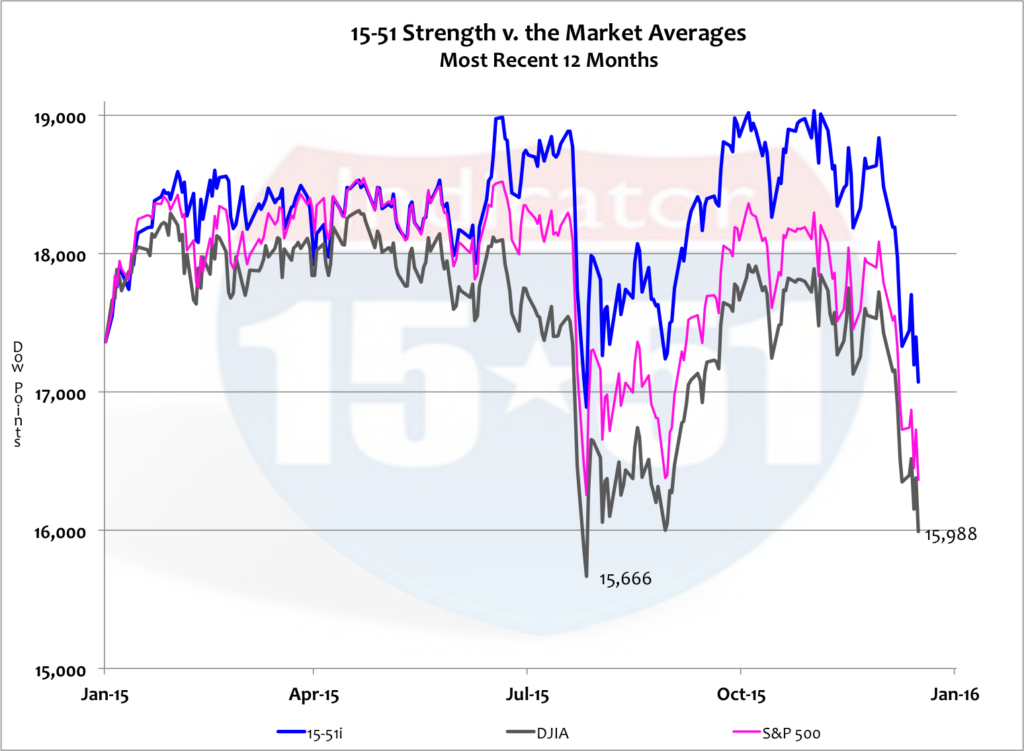 This next week will be very interesting for the stock market and the kind of signal institutional investors send – because it is they who are responsible for much of the market’s volatility.

For example, in a Wall Street Journal article entitled, Is the Market Right that the Fed is Wrong, the author presents a few “expert” opinions to make his case. First up is Ben Inker, billed as the “co-head of asset allocation at GMO, a money-management firm co-founded by Jeremy Grantham.” Maybe those names should mean something, but they don’t to me. I never heard of them nor could I pick either one of them out of a line-up. But I digress…

Inker rationalizes his bet, “The market is saying the economy is slowing quite considerably. If the market is right, [Fed officials] almost certainly won’t raise rates as much as they said during the December meeting.”

Okay, so he thinks the stock market is saying the economy is slowing. Great. Welcome to reality.

Well the Fed should want that relationship to change – helping the stock market is not their job! But again I digress…

What Inker’s disjointed words are saying is exactly right. The economy is weak and weakening, and the Fed has inflated stock valuations with easy money policies like QE and low interest rates — and Wall Street loves it. A reverse in Fed policy will deflate the stock market unless the economy can lift valuations – which it can’t. Higher interest rates will help America and hurt stock prices — which Wall Street hates.

So what will the Fed do – help America or Wall Street banks?

But it is Inker’s positioning that is perhaps the most interesting piece of his excerpts. Inker, a hedge fund guy, clearly wants the Fed to continue easy money. After all, that makes his job easier, and bonuses healthier. But he can’t be so self-serving in his presentation, so he purports that “the market” disagrees with the Fed’s view that the economy is getting stronger, which was part of the basis the Fed used to raise rates in December. Certainly little ole’ Inker can’t tell the Fed what to do – but certainly the Fed must listen to a higher authority like “the market,” right?

Investors should understand that the majority of Wall Street wants easy money to continue. It has made their life easier, and very rewarding. They never want it to end. So they sell stocks in large blocks and drive prices down to show their displeasure of it ending. And when things turn into a real mess every broker under the sun will need a scapegoat – and that’s when they throw the Fed under the bus.

Don’t believe me? Here’s a prelude of what to expect in yet another excerpt from that very same Wall Street Journal article…

“The market does appear to now be pushing the Fed” away from raising rates, said Joseph LaVorgna, chief U.S. economist at Deutsche Bank AG. “History says the market will win out because it has the ability to cause the damage that the Fed and others desperately want to avoid, which is a recession.”

How about that? This clown LaVorgna puts forth the notion that a stock market correction can actually create a recession. Really??? How does it do that?

That is a cart-pulling-the-horse perspective.

Recessions cause stock market corrections, not the other way around. Price corrections can happen at any time and without a recession present – and they can be severe. It all depends on the amount of inflation  present in the stock market at that particular time.

LaVorgna’s comment above foreshadows a Wall Street position of blaming the next major recession on the Federal Reserve’s monetary policy — triggered by a tightening of money that caused a major stock market correction which in turn then created a recession. That’s ass-backwards thinking.

Boy it’s frightening how much bad information is out there.

How about this perspective, again from the same article…

“Much of the pervasive gloom hanging over the U.S. outlook is unwarranted,” Barclays Chief Economist Michael Gapen argued…noting that U.S. labor markets, which have been a reliable indicator of future economic growth, show no sign of weakness.

Really, Mikey? Have you taken a peek at the 40 year low labor participation rate? I’d consider that a slight indication.

When you read this stuff it’s easy to understand the volatility in the stock market. People in high places in the establishment have no clue what’s going on and could care less about reality. They spew any stupid piece of rhetoric to advance their portfolio’s agenda. For instance, I’d lay a wager that Gapen is betting against bonds, hence his need for higher interest rates. So he makes a stupid comment like the one above to substantiate his position. The same is true with Inker, who is obviously long stocks and short on bonds – that’s why he wants more easy money and low interest rates.

That’s another example why you can’t trust anything these knuckleheads (brokers and money managers) say. Their narrative is tied to what financial products they are trying to sell at the current moment. Absurdity inserted as needed.

The stock market is seriously over-valued. It should price correct before recession sets in. And then it should correct more when recession presents itself. And yes, Fed policy has been atrocious. But higher interest rates won’t be the cause of the next recession. It’d be silly to think so. The problem now, and has been for a long time, is weak global demand.

This is going to be a long messy road.