Scuttlebutt regarding the probability of an impending recession is swirling. Even I chimed in with last week’s blog, Take It From Her, “If you join the millions who believe the stock market is a leading indicator of economic output you have to believe recession is on the horizon.”

Since that post several Wall Street Journal headlines crossed the wire that suggest my inference to be correct:

Of course, these articles are filled with the same old stuff – one expert said chances of recession in the next twelve months have doubled, while another sees it at 21%. One index places the probability of a recession at 50%, while another bets 28%.

And of course the cause of recession also continued to be batted around – “Falling oil prices are bad news for 2016 growth,” one said; “Tightening financial conditions are a sizable worry,” said another; while a third amped up the vernacular, “The toxicity of the global economic environment continues to be a threat.” You may recall that “toxic” was widely used to describe the last financial crisis.

The last major stock market correction was driven by poor monetary and fiscal policies that fueled massive inflation and debt that broke the backs of subprime consumers and the financial system.

Today, poor monetary and fiscal policies have once again fueled an ungodly spike of inflation and debt – though this time over-extended debt is largely concentrated at the institutional and establishment levels, and inflation is mostly present and visible in the stock market. However, those differences don’t mean a major correction and subsequent recession won’t be experienced. Instead it means they will change form.

For instance, in place of consumers and banks going broke, countries and institutions will fail. The stock market will correct but it will be worse – because the condition is worse.  A recession will occur but it will be deeper and longer than the previous because the problem is bigger and wider. The recovery will be harder and more painful because governments will have less tools and ability to combat the worsening market condition – not to mention that they will look to themselves as the solution and not to people and free markets.

The reason history often repeats is because people often make the same mistakes.

One of the WSJ articles mentioned above relays that since World War II the average economic expansion has lasted six years. The current expansion has lasted just about that, prompting one analyst to portray the status of this expansion as “in the bottom of the seventh [inning]” of its life expectancy.

Indeed, nothing lasts forever – and policies and market conditions are no exception. They are as cyclical as the seasons.

And another thing is just as certain: the exact moment a recession occurs is impossible to predict. But that divine skill is not required to invest successfully, nor is it essential to assess where we are in the cycle.

The stock market is a leading indicator of market activity because stock prices are updated to a moment’s news via daily trading. The stock market, therefore, reacts to softening economic trends in an instant – and long before economic data is released from the government. Remember, investors received the first estimate of market activity for the 4th quarter on January 29, 2016, one month after the December quarter closed.  This is not to mention that conventional thought defines a recession as two consecutive quarters (or 6 months) of negative growth, or contraction.

The point here is simple: if investors wait for a recession to be confirmed in order to make portfolio adjustments they will be acting way too late. That’s a surefire way to lose lots of money.

Instead, investors should look to a leading indicator for decision-making guidance.

The stock market, as indicted by the Dow Jones Industrial Average and/or the S&P 500, has been an incredible predictor of recessionary trends. This can be seen quite clearly in a long-term trend comparison to economic activity via Gross Domestic Product (GDP). The chart below compares the stock market averages to GDP since the last stock market top, October 2007. See below. 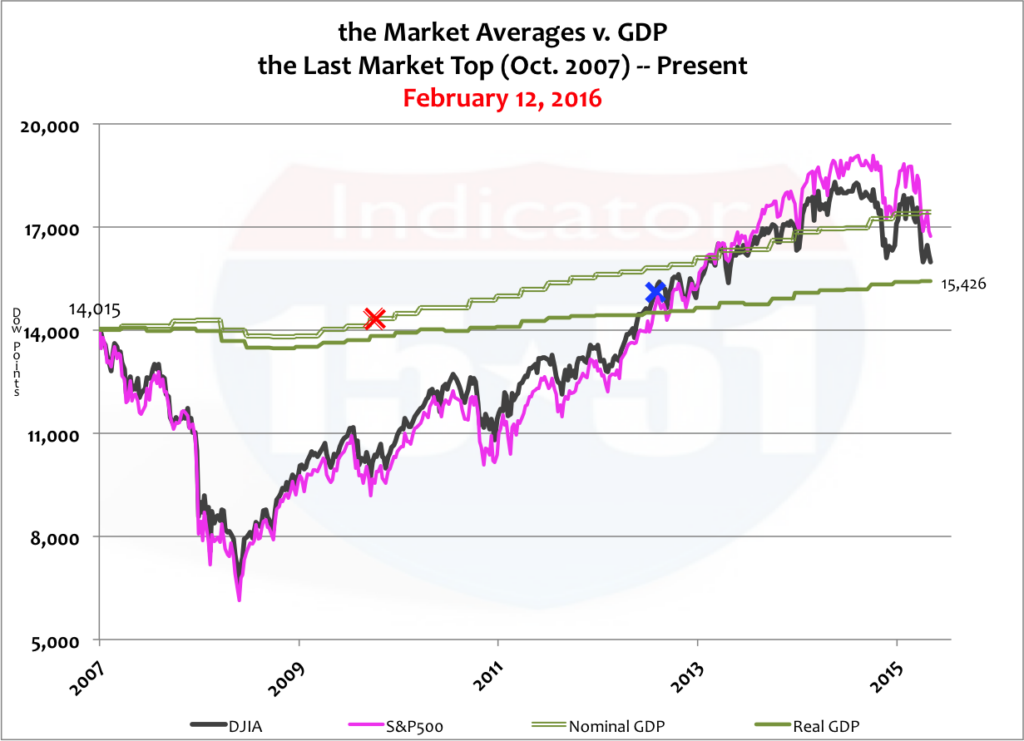 The red ‘x’ indicates when economic expansion commenced after the last recession, approximately June 2010. The blue ‘x’ signifies the beginning of the Bull Market (approximately May 2013), as stock market activity regained its previous high and placed its trend-line above that of Real GDP.

You can also see that the stock market averages have recently broken below the Nominal GDP trend-line and are headed for Real GDP. That’s an advanced warning of recession. In fact, for as long as I’ve been analyzing the stock market (25 years or so) every time the averages crossed under Real GDP a recession followed. It happened when the tech-boom went bust; and it happened when the housing boom collapsed.

And it is happening again right now, signifying a recessionary end to the QE boom – which according to the stock market, appears to be heading our way.