The stock market continued to tremor last week. The driver this time was the employment situation; the new jobs report was to be released Friday morning.

Early in the week it was all speculation, and again the first four trading days sensed bad news with negative returns. But unlike last week there would be no silver bullet on Friday; stocks lost another point-and-a-half when the actual numbers were released and ended the week down more than two percent. So far this year stocks are down 8%, gold is up 11%, and yields have fallen 19%. See below. 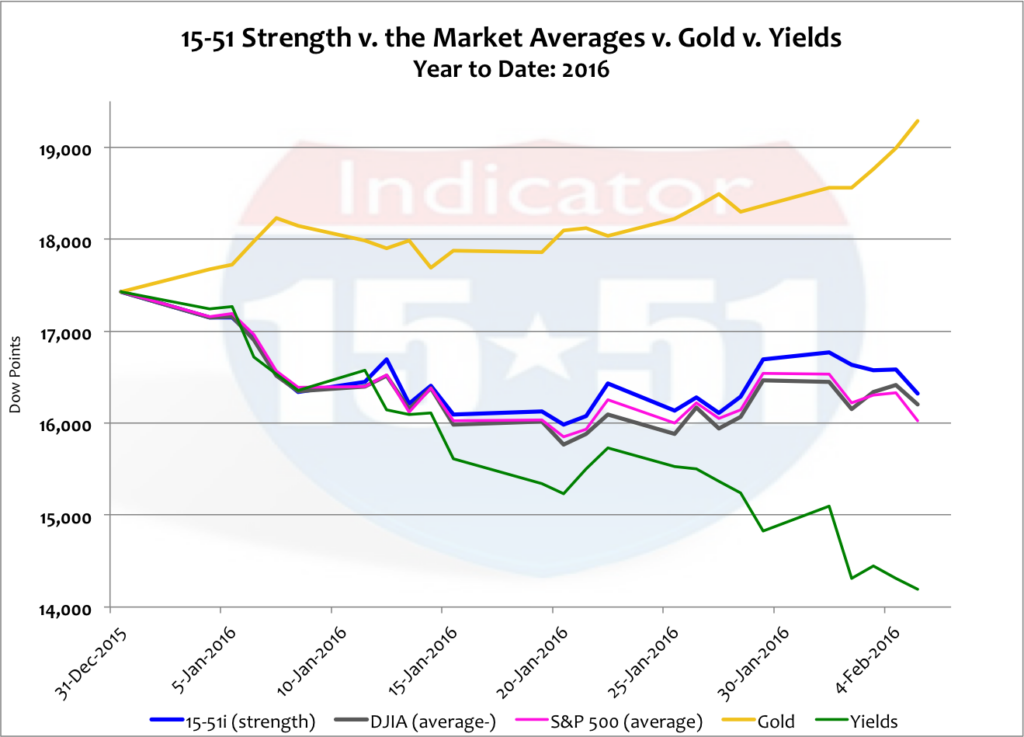 On the surface the employment report looked good: the unemployment rate dropped below 5% (to 4.9%) for the first time since February 2008; the labor participation rate finally increased, albeit a miniscule .1% – but a positive development nevertheless; and wages posted their second largest gain of the “recovery,” increasing .5%. Wages have increased 2.5% year-over-year.

So why did stocks hit the skids?

Ah, the devil in the details. In the same report the Department of Labor adjusted December’s job gain down by 105,000, which almost wiped out the entire gain in January (151,000). That stings.

But a deeper look into the report shows a broader measure of unemployment – one that adds workers stuck in part-time jobs and those too discouraged to look for work – revealed that actually 9.9% of able persons are unemployed, and that rate hasn’t changed for months.

And yes, wages finally advanced, but the growth rate is well below the last expansion when increases of 3-to-4% were routine. And while the labor participation rate improved it’s still at lows not seen since the 1970’s.

So the jobs report wasn’t great – but what’s new? These kinds of smoke and mirror reports have been a consistent theme in this entire seven-year expansion. So I’m not so sure that the jobs report was what the stock market was reacting to last week.

Ever since the first major stock market shock was felt in August of last year I never thought it was a reaction to just one impetus, China. Like I said then, and a few times since, China was only a symbol of a much larger systemic problem; and that that problem will sooner or later come to an explosive head.

In that vein, a disturbing revelation came from Christine Lagarde, chairwoman of the International Monetary Fund (IMF), who made a public plea last week for world leaders to greatly increase the emergency funding mechanisms for the global economy. “While the safety net has expanded in size and coverage since the 2008 financial crisis, it has also become more fragmented and asymmetric.” She went on to say that foreign-exchange reserves, central bank credit lines, and the IMF’s own trillion-dollar war chest of reserves were inadequate to meet the growing vulnerabilities of the global economy.

I don’t know about you, but that doesn’t give me a warm and fuzzy feeling.

Lagarde went on, “In both emerging and advanced economies, it may be helpful to reconsider tax policies – which have a built-in bias towards debt, largely through deductibility.”

First things first…the IMF is a crisis lender. They lend money to nation states that are failing and/or cannot raise money in the investment markets for whatever reason.

Second, urging large member states like the U.S. for additional capital contributions to add to the trillions already had in reserve tells you one thing – Lagarde is preparing for another big financial crisis.

Third, Lagarde sees that problem festering in the debt levels of emerging markets – and she should know. She works with these nations, they are her customers, and she knows their credit scores. That’s her business. And according to her, she doesn’t believe the IMF has enough money to cover their brewing mess – which she partially resolves with a “[reconsideration] of tax policies.”

Her tax philosophy is two-sided. First, by eliminating the tax deductibility of interest expense, entities (i.e. people, companies, and investment vehicles) will borrow less because the tax incentive is gone and borrowing becomes more expensive. In other words, changing the tax law would shrink or minimize the amount of debt emerging markets take on.

Second, by eliminating the tax deductibility of interest expense central governments of advanced economies will receive more tax revenues because the tax benefit is gone.

And what does Lagarde want advanced economies like the U.S. to do with that extra revenue?

Give it to the IMF, of course.

That’s right, Lagarde is proposing to increase taxes on constituents of one country to bailout another through a non-representative governing body (the IMF). Remember, the mortgage interest deduction is an interest expense deduction. If that goes away every homeowner in the U.S. will pay more taxes to bailout emerging markets all over the world.

Talk about taxation without representation.

Think about this from the investment perspective for a second. American investors invest trillions of dollars in mutual funds, and unfortunately, too much of that money gets invested into mutual funds dedicated to emerging markets. So let’s say Lagarde is right and emerging markets get slammed during the next global crisis. American investors will lose trillions of dollars in investment value during the “crisis.” At the same time a portion of their tax dollars are transferred to the IMF, who then gives that money to the same emerging market.

In other words, the IMF reimburses the emerging market for mistakes it made and the American investor is left paying the tab – twice, once through investment loss and again via a tax transfer to the IMF.

When will the nonsense ever stop?

Pumping more money into failed economic and governing models is not the pathway to prosperity. Banks can’t create growth or vibrant economies. They are simply enablers if market conditions are right. And they’re not right now.

It seems that the answer to everything is always more government, more regulations and more taxes – before, during, and post crisis. Heck, it’s gotten to a point where a quasi governing body, the IMF, is politicking for higher taxes so it can redistribute more member state revenue. This is nuts.

Everyone is aware of the significant correction in the energy market. Oil has been in a two-year decline and it has hurt energy companies and their investors. All major players have reported drastically reduced profits, plans to cut staff, spending, and research and development – and their stocks are getting hammered. So what does our fearless leader do? That’s right, President Obama says the drop in oil prices makes room for an oil and gasoline tax hike.

How is that supposed to help the economy?

But this big government nonsense exists everywhere. For instance, we know that Lagarde sees trouble with emerging market economies and we know about the weakness in China. Add to those the European Union, who just this week cut their 2016 growth forecast to an anemic 1.7%. One day later the European Central Bank announced they would be ready to act, and act aggressively, as soon as March if their economies needed another puff of life.

There they go again. The economy stinks – print more money and encourage more central government deficit and irresponsible spending. It’s only a matter of time until tax hikes are the next solution over there too.

And just when you thought it was safe to go back into the water, Greece resurfaced again this week. “I fear we could be heading for bankruptcy and an exit from the euro,” said one Greek businessman last week. It’s the same old thing with them. They can’t afford themselves, they don’t want to cut any nanny-state benefits, and they’re begging for more bailout money from guess who? –The IMF.

What a vicious cycle.

So when will it end, and what will bring the end closer?

That is, in fact, the topic of a new debate in America, whether or not a recession is in the making; and if so, what will be the cause or warning signal.

Many point to the substantial correction in the aforementioned energy market as the guiding light. Some think the severity of its correction could tip the economy into recession, and others think that’s the furthest thing from reality. The latter is quick to point out that a rise, not a drop, in oil prices has preceded or accompanied every recession since the 1970’s. This compelled David Rosenberg, chief economist at Gluskin Sheff & Associates, to say, “I put the odds of a U.S. recession in the next year as close to zero as anything could be close to zero.”

Take that and bet your life on blue at the roulette table.

Just as the rise in oil prices had nothing to do with the prior recessions noted above, low oil prices can’t fend off the next. Instead, the next recession will be driven by the same thing all others have been – falling global demand, which can be seen right now throughout the entire economy. Technology got slammed last week not because things are great. And the prices for corn and soybeans have dropped below their cost of production. None of this had anything to do with the price of oil. It’s because of lower demand, plain and simple.

Indeed, the collapse in oil will strain certain other sectors of the economy – banking and financial, labor, and steel, to name a few. But it cannot cause a broad-based economic recession all by itself.

Could it push an extremely weak and vulnerable economy over the edge?

There is so much weakness in the global economy it’s scary. In fact, that’s the influence behind the significant drop in yields for U.S. Treasuries. Investors are moving money from stocks to bonds, causing stock values to fall and bond values to rise. (Bond values move in the opposite direction as yields.) Investors are scared and seeking safety. That’s why gold has turned around. See below. 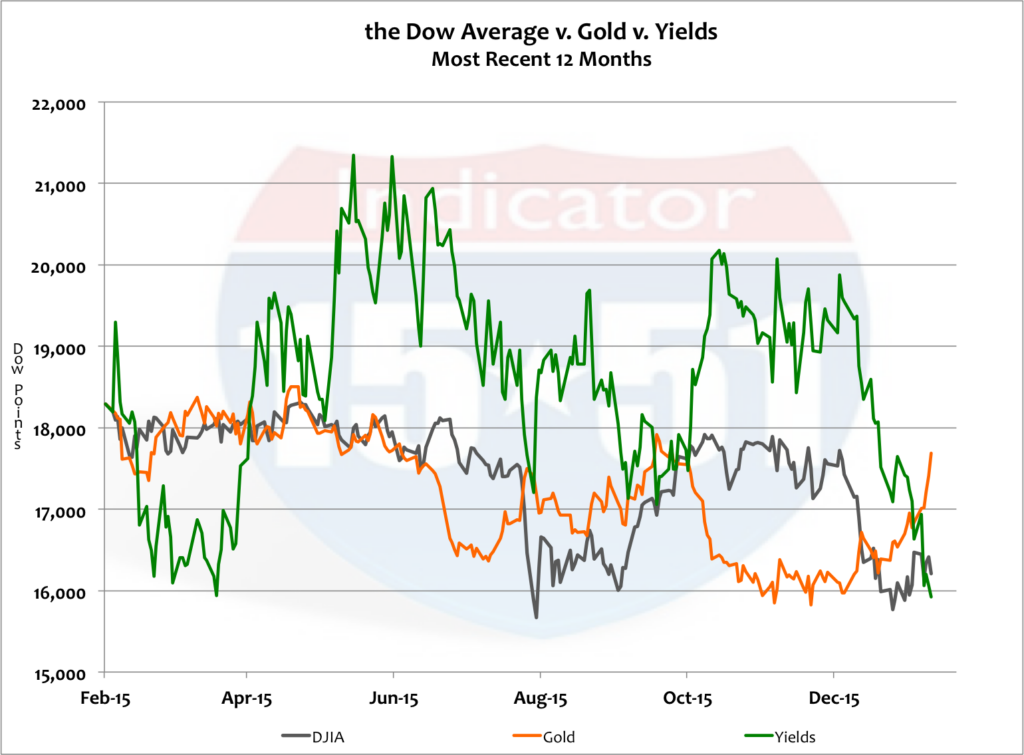 If you join the millions who believe the stock market is a leading indicator of economic output you have to believe recession is on the horizon. The stock market is down 11% in the most recent twelve months, and down 1% over the past two years. Falling yields, also a sign of economic weakness, have been on a consistent downward trend for two years, down some 38% during that time.

If the markets above are right and the U.S. slips into recession the world will certainly follow, and that’s when things get really ugly.

And that’s what Christine Lagarde is bracing her business for.

So take it from her and brace yours.