Well if I was correct in describing Britain’s epic Brexit vote as a modern day Lexington and Concord then the presidential vote of November 8th is today’s version of the Battle of Saratoga – an event where a bunch of rag-tag “deplorables” rose up and turned the tides on the establishment crown, a victory that provided a pivotal turning point in the war against overzealous government.

Now I’m not saying that Trump was the perfect candidate, or the perfect general to lead freedom’s cause. Far from it. Instead he was simply the only other option to a corrupt establishment candidate who wanted to tax more, regulate more, and force more central government into the lives of individuals and enterprise. This year’s vote was not between two people but between two different approaches to Americanism, a quasi Socialist/Communist system versus a pseudo Capitalist/Socialist structure – and the freer model won the day.

It was a good day for Markets.

On the Monday before the election stocks rose 2% in anticipation of the Clinton win that polls were forecasting. During the daylight hours on Tuesday, Election Day, the expected Clinton victory “appeared certain” – with many pundits predicting a landslide win for her. Stocks rose another half percent on that condition.

And then night fell.

Little-by-little victory slipped through Hillary’s fingers like sand through the hourglass – first Florida, then Ohio, and then Iowa, Wisconsin – and OMG, Pennsylvania?!?

Immediately following this new reality stock futures began trading down. In short order they were down 700 points, indicating a 5% drop in stock prices for Wednesday’s open. That was Tuesday night.

But by the time markets closed on the much-anticipated post-election session stock markets ended Wednesday up 1.4% – and then followed with another 1.2% upward move on Thursday. Friday added another positive fraction, and when it was all said and done the week ended with a strong 5% increase.

Like the polls, market speculation regarding the impact of the election was way off base.

The initial negative reaction to the Trump win was another spoiled-brat impulse by the Wall Street establishment. They associated the Trump victory with an end to easy money and programs like quantitative easing (QE), and they wanted to show their displeasure with it. So they traded that way and sent futures down.

But then two things happened.

First, Trump said he had no intention of firing current Federal Reserve chairwomen, and monetary dove, Janet Yellen. (If true, this would mark Trump’s first mistake as president (see: Issues be Damned)). In any event, the announcement provided Wall Street with a glimmer of hope that easy money would somehow continue, and that tighter money would happen in the most tempered fashion possible.

Second, the hypocrites on Wall Street finally realized that Trump’s domestic policies are actually good for business, investment, and consumers. That is good for markets – and stocks. And so they swiftly reversed course and bid prices up higher. The Dow Jones Industrial Average ended the week at a new all-time high; while both the S&P 500 and 15-51 Indicator ended more than 1% of their previous highs. See below. 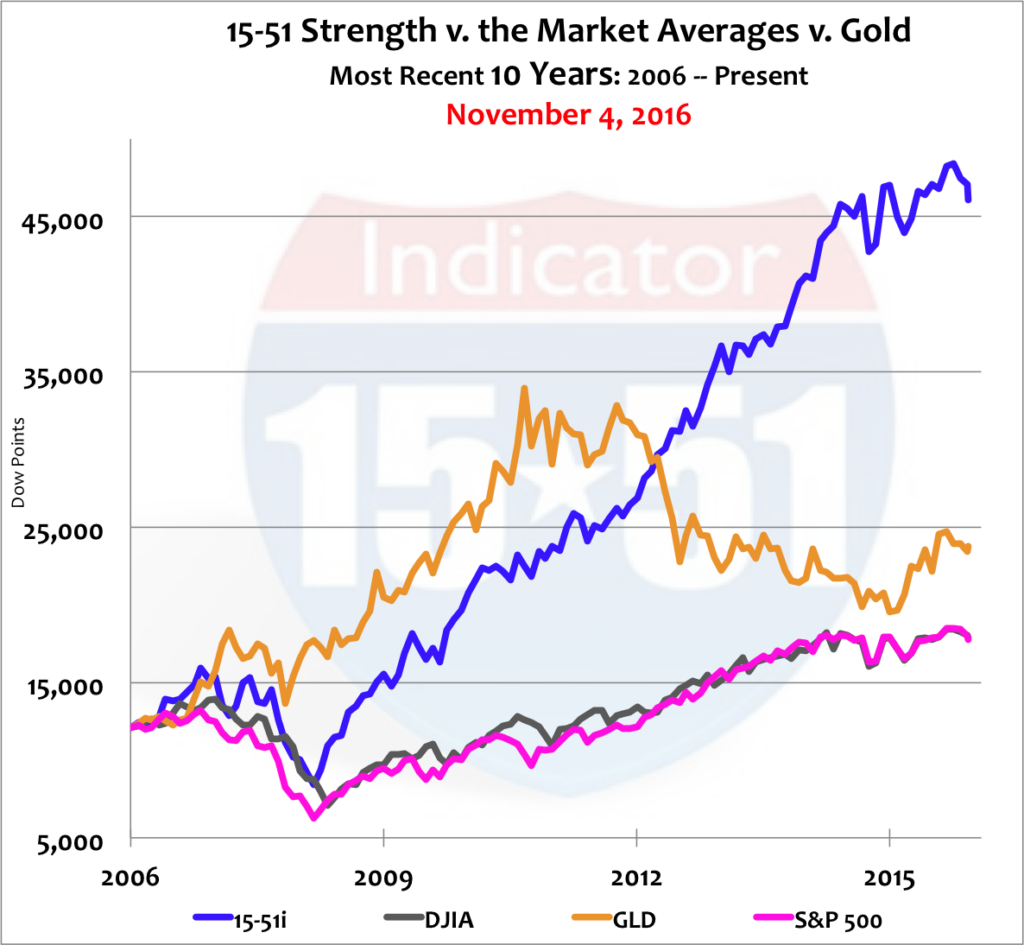 As mentioned in Strategies for the Winner, buying into a Trump dip would have been premature. In that same vein, buying into a Trump rally is equally as misguided, and way too late for the underlying market condition. Below is the same chart as the above except it includes activity for gold and yields. Their addition changed the chart’s scaling so all items could fit into the picture. See below. 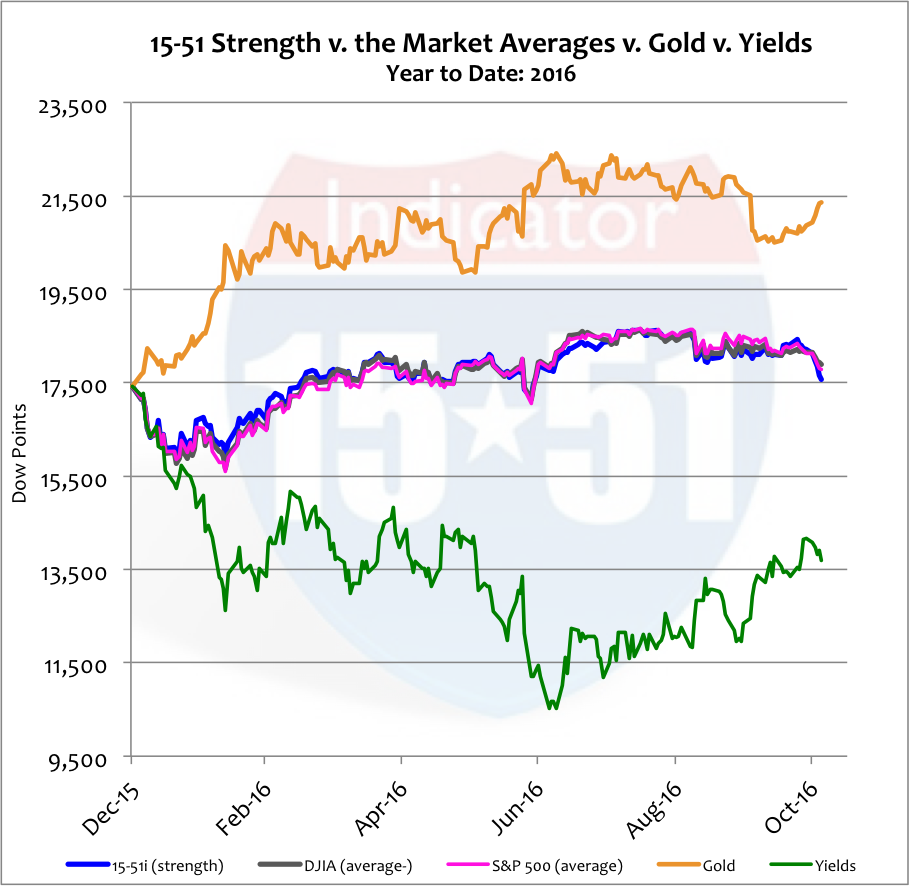 The post-election stock move looks muted in this view — but take a gander at the jump in yields and the slip in gold. Nothing mute about them. These sharp moves indicate a higher interest rate environment, which is a totally legitimate position. Consider this…

It is no secret that interest rates have been historically low for way too long. Along with Dodd-Frank and other ineffective and prohibitive regulations like Sarbanes-Oxley, interest rate policy has hindered lending and growth. Even though a normalized interest rate policy has been totally warranted and substantiated for a long time, a dovish Federal Reserve under Janet Yellen has been too scared to raise rates to a reasonable level in fear that it would be labeled as the one responsible for causing the next recession or financial crisis when the other shoe finally dropped. Yes, the Fed has talked a lot about raising rates. But because they didn’t have the courage to do it, they allowed bogus data to constantly talk them out of it. And the reason they were so wishy-washy is because they didn’t have a perfect excuse to raise rates, signals were always mixed, and they didn’t have someone or something else to blame if it all went wrong.

One of Trump’s big agenda items is a significant tax cut for businesses and individuals. If purchasing power were to increase quickly and considerably as Trump intends, the flood of new cash into the economy would cause a spike in inflation. That scares the Fed – even though they have been looking for higher inflation for a long time. Like the rest of the establishment world, the Fed simply wasn’t expecting Trump and his ambitious tax-cut plan to win the vote. If they had, interest rates would already be higher. (Count on a Fed move in December.)

The Federal Reserve raises interest rates to discourage borrowing and spending. They do so to control inflation, the general rise in prices. Prices rise when consumer demand increases. Tax cuts increase spending (a.k.a. consumer demand) because more money is available to consumers and businesses to circulate through the economy.

So now the Fed has to move interest rates higher to combat inflationary pressure inspired by the Trump tax plan. Unless, of course, they can convince Trump to slowly phase in his tax cuts like Volker did to Reagan. (That would be Trump’s second mistake as the new president.) But this has yet to be determined.

That’s one reason I maintain a wait-and-see strategy to investment decisions at this point in time. It’s hard to figure what will actually happen in Trump’s first 100 days.

In any event, the Fed must act (which is the reason yields spiked and gold dropped post-election). But they are in a delicate position. Their inflation target is 2%. The current year inflation average is 1.4%. So they’re not far off. The Trump tax cuts are aggressive and can easily move that needle beyond the target. That said, interest rates need to move a lot higher, fast, and without causing panic – which has already begun.

International Monetary Fund (IMF) chairwoman, Christine Lagarde, has been warning of a brewing financial crisis in emerging markets that would ultimately reach our shores for a long time. In Take it from Her, posted in February 2016, I said this….

a disturbing revelation came from Christine Lagarde, chairwoman of the International Monetary Fund (IMF), who made a public plea last week for world leaders to greatly increase the emergency funding mechanisms for the global economy. “While the safety net has expanded in size and coverage since the 2008 financial crisis, it has also become more fragmented and asymmetric.” She went on to say that foreign-exchange reserves, central bank credit lines, and the IMF’s own trillion-dollar war chest of reserves were inadequate to meet the growing vulnerabilities of the global economy.

The International Monetary Fund (IMF) has been sounding the alarm about another global crisis brewing for a long time, and it has recently added more fuel to their fire. The IMF downgraded global economic growth again and reiterated their call for “urgent” action by the G20 to stabilize the fragile global economy. They noted that advanced economies [a.k.a. the U.S.] would get hit the hardest during the next crisis, and that that crisis will be driven by “the intensification of bank distress in vulnerable economies.”

If you are a believer in Christine Lagarde’s warning, and I am, what do you think higher U.S. interest rates will do to emerging markets?

Emerging markets use foreign capital to fund their infrastructure needs, social security spending, and bank lending. When U.S. interest rates rise so do the rates for the rest of the world. Many emerging markets can’t afford themselves now. Higher rates will only make their problems worse. And it’s already coming to a head…

On November 12, 2016, just four days after the U.S. election, the Wall Street Journal posted an article on-line entitled, Donald Trump Win Has Investors Selling in Emerging Markets. I recommend reading the entire article, but below are some highlights:

As emerging market debt becomes abundant their yields rise to attract capital; their stocks also sell-off with the worldwide rebalancing of capital. This causes mayhem for local governments, who find it harder and harder to raise capital, pay bills, and function as a legitimate custodian. And before you know it, governments fail and all hell breaks loose.

In Issues Be Damned, I said, “The next president will run into a burning building.” The above is that building, and the fire has already started.

Trump will be tested in relatively short order once in office, and his policies will be at the epicenter of debate. It won’t take long to find out how strong he is, and how committed he is to his limited government agenda.

That’s why I caution investors on jumping into the stock market hysteria right now. No doubt, Trump promises to be better for stocks than Clinton projected. But neither of them, no matter what they did, could hold off this next onslaught. The seeds were sown a very long time ago, and have since developed an extremely deep root system that makes it impossible to remove without an inordinate amount of excruciating pain.

You can thank Yellen and Obama for that.

Bonds and fixed income investments continue to be high-risk assets, and even more so right now. Yields are still at historic lows and will most certainly be forced higher in the very near future. (Bond values fall when interest rates and yields rise.) A spike in inflation will cause rates to runaway higher.

Gold will continue to be confused for the foreseeable future as it struggles to determine whether higher interest rates are indicating a stronger currency and economy or higher inflation. I expect it will continue to take its cue from the stock market until a definite condition is certain; it will fall when stocks rise, and vice versa.

One last thing…this meltdown that is about to happen – it should have happened long ago. The market should have been allowed to recess as much as it needed in ’08 to completely correct. Instead an overzealous U.S. government led the world in a money and debt ponzi scheme that inflated the disastrous balloon that now looms over us. Like the last financial crisis, this next one could have easily been avoided. But again this time, government couldn’t control themselves.

I can already see Obama from his plush post-presidential office blaming Trump’s policies – and the free market system – for again causing a global financial disaster. If only Trump had followed his program the disaster in front never would have materialized, Obama is sure to say. It is Trump’s fault…that’s what you get when you vote for a reality TV star.

Can’t you just see it?

But Obama will again be wrong.

Trump needs to be strong in the face of calamity. He must have faith in the free market system and resist the urge to re-inflate the balloon as Obama did. That will only kick the can down the road and bring us back to this very same spot in 8 to 10 years, when we will be saying the same things, and fighting the same fight.

Reagan once said, “Freedom is never more than a generation away from extinction.”