The Dow Jones Industrial Average was last year’s big winner; it posted a solid 13.4% gain in 2016. The S&P 500 added 9.5% for the year, and the 15-51 Strength Indicator recorded an 8.6% gain. All three market indicators ended the year more than 1% off their all-time highs, and more than half of their annual gains came after the November 8th election. There is little doubt stocks ended the year with much more optimism than when they started. See below. 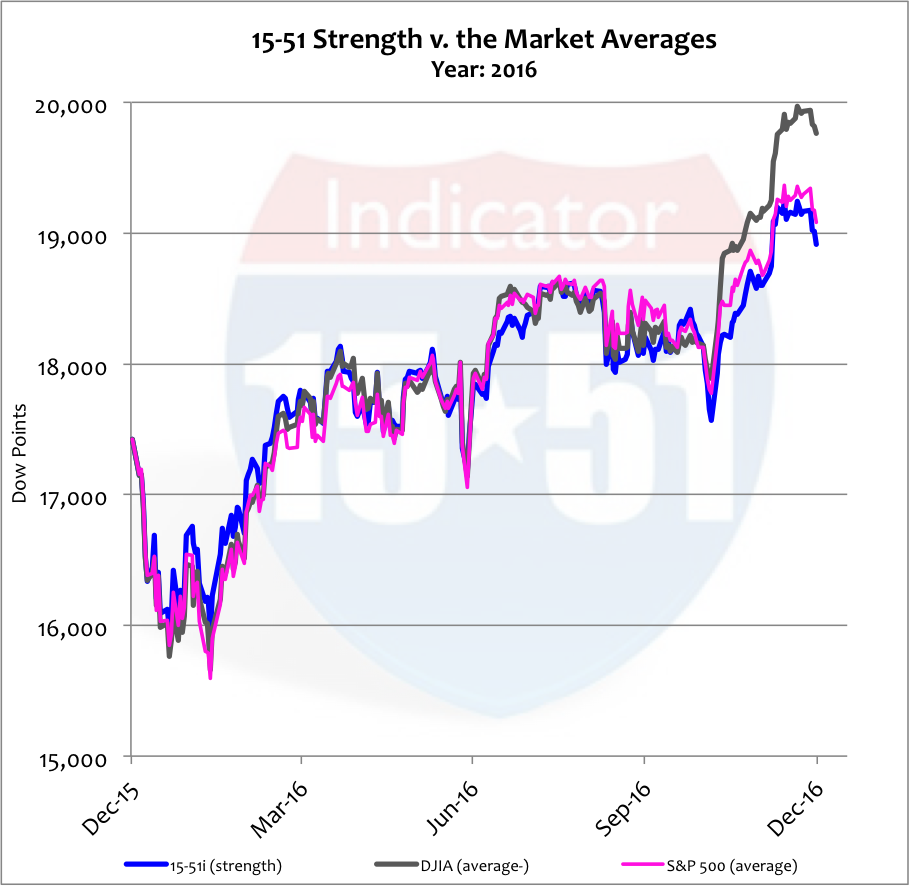 The post election bounce was lead by Financials, who should reap huge benefits in a higher interest rate environment. Higher interest rates incentivize banks to lend; more loans equal more profit. And with the Trump promise of lower corporate taxes businesses will have more incentive to invest in growth and borrow. All of that helped to propel Financials upward by 18% in the final two months of the year.

The move in Financials particularly helped the performance of the Dow Jones Industrial Average, which has more financial stocks and a higher allocation to that market than does the 15-51 Indicator.

Healthcare stocks also surged late in the year, rising some 12% post-election. This in hopes Trump will deliver on his promise to repeal-and-replace Obamacare.

Another market with a late year rally worth noting is the Defense and Aerospace sector, which added 10% in the final stretch. The rest of the market was spattered with solid single-digit gains.

So there you have it – investors sent a strong message after the election: Trump policies will be good for banks, healthcare companies and defense contractors.

Make of it what you will.

The highest performing Industry in 2016 was Industrial (19%) and the lowest was Financials, which even with the strong post-election performance only eked out a 1% gain for the year. A table of 2016 industry returns is below. 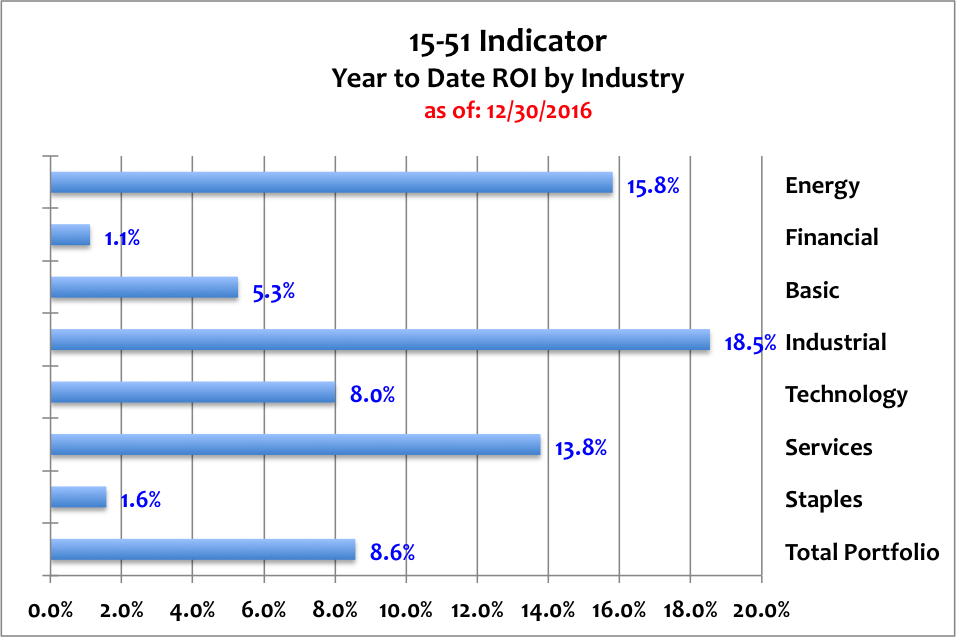 Even though the strong move in stocks stole the headlines, it wasn’t the mainline event for financial markets in 2016. Yields, once down 40% in the year, ended up 8% after a swift post-election reversal. Bond values and yields run in opposite directions.

Yields jumped 31% in the aftermath of the vote and, as expected, the Trump victory prompted the Federal Reserve to finally make another move at their December 2016 meeting. They raised the Fed Funds rate by another quarter-point.

This will be a continuing theme.

Gold ended a rocky 2016 up 8% and continued to take its lead from the stock market. The precious metal lost 10% since the Trump victory and ended the year 16% off its high. This, too, was to be expected. See below. 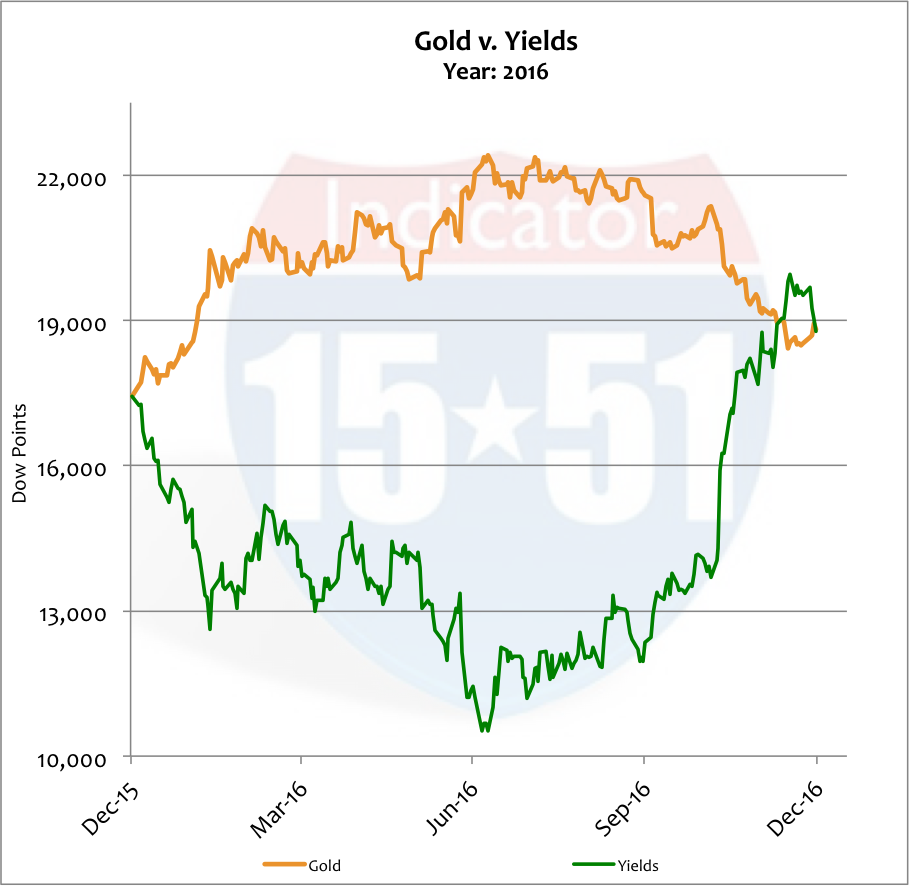 To investors I say this: Forget about the stock market as a leading indicator and look to the bond market for future guidance. Yields are the real story.

Below is an excerpt from SURVIVING THE NEXT CRASH…

“And while another act of war on the homeland can obviously begin the next major corrective cycle, I still believe the impetus will be money related: inflation, spiking yields, widespread currency and debt devaluations, the collapse of the Euro, or something along those lines.”

A major problem still exists in Europe. Governments are going broke and the European Central Bank is getting tight. Greece can’t afford itself with historically low interest rates. The same goes for Italy, whose government is in turmoil. Add Portugal to the list, Cypress, etc. etc. – and then add the cherry on top, France. They’re in shambles, too. Higher interest rates will make all of their conditions worse.

Also from SURVIVING THE NEXT CRASH,

“It’s hard to imagine how much longer the German people will continue transferring their hard earned taxed dollars to irresponsible countries like Greece, Italy, and Portugal, etc. etc…These are the things that break-up unions – currency unions, that is.”

Well it appears that that time is getting closer. After several failed bailout attempts the EU looks to be getting tired of the same old dog-and-pony show. This time around they are demanding member nations to implement reform and austerity measures before another emergency funding program is initiated. But those broke countries – those who either failed to implement austerity measures or implemented policies that made their conditions worse – are unwilling to accept EU dictate and German demands. They just want more money to fund their failed systems.

And that is the crux of the matter.

At what point does Greece, originator of the EU-Exit movement, leave the Euro in order to reclaim their right and ability to print their own money and debt?

The EU won’t give them any more money. Are they to do nothing?

The same goes for Italy.

The point is that once one country leaves the currency union others will follow. And then boom, crisis: the Euro collapses and the world undergoes a widespread debt and currency devaluation.

We haven’t even mentioned the many issues in emerging markets and the IMF’s many warnings. Higher interest rates will make that problem worse as well.

And then again there’s this scary point, also from SURVIVING THE NEXT CRASH…

“This is not to mention that at some point the Federal Reserve will have to start removing some of the QE money from the economy to avoid hyper-inflation – and that’s going to be a real trick.”

Add the Trump tax cuts into this equation and it really gets tricky.

What a mess it will be.

Like I said when this dialogue began, forget about what the stock market is saying right now. Yields, while still low, are sounding an alarm. They are the most important indicator to watch.

And it is equally important to watch what the new President does. Governments control markets, and this is the biggest change in government we have probably ever seen, a change much bigger than the last one, from G.W. Bush to Obama.

That said, I’ll make one final note before ending this piece…

There is no way to know what the Trump will do once in office. We know what he campaigned on, and we know that he has already backed off some of those promises. Maybe that’s just transitional politics. Maybe not. It’s hard to figure for so many reasons. However what we do know is that his first hundred days will be critical, and very telling.

Perhaps the most ironic thing to come from the election is how both political Parties have claimed victory – the Republicans because a republican won the Electoral College, and the Democrats because Hillary won the popular vote.

But the Republican establishment did everything they could do to derail a Trump presidency. Conservative pundits like The Weekly Standard used all of their power and might to sabotage his chance of winning. Paul Ryan called him a racist and former President H.W. Bush endorsed the other side. As a result of the many establishment condemnations Trump raised little-to-no money and had a mere fraction of Hillary’s campaign budget.

And he won anyway.

The Republican Party, like Hillary Clinton and the rest of the Democrat elites, lost the 2016 election in resounding fashion.

And instead of realizing that they need real change the Parties each positioned the election results as a victory. Democrats threaten to obstruct Trump at every angle and Republicans say they are  “willing to work” with him – a position that purports both Parties as simply tolerating an outcome rather than reforming their misguided operations.

That could spell trouble.

Will the Republican Party with their socialist big-government tendencies fight Trump every step of the way, pissed that he spat in their faces and then smiled from the winner’s circle? Will they water down his campaign promises into useless clichés that accomplish nothing? Will they act swiftly and decisively as Obama and the Democrats did, or will they once again sellout the free-market system by cowering to minority propaganda that produces stupid things like auto-expiring tax cuts and bloated government regs like No Child Left Behind?

What will Trump do and how quickly will he get it done?

That is the million-dollar question.