This could be the longest span of time between blogs since I began posting online articles more than six years ago. The reason for my silence is simple: nothing of any significance has happened.—And I never wanted to be one of those pundits who create nothing from nothing. Such a practice has a tendency of producing incoherent pieces that convey nothing of import or purpose, and generally creates confusion among the readership. And while that’s not my style – it is quite common in today’s omnipresent media. Take the case of Myles Udland of Yahoo Finance, for example.

In anticipation of the release of first quarter 2017 GDP numbers Mr. Udland posted an article on April 27, 2017 entitled, GDP – WHAT YOU NEED TO KNOW IN FRIDAY MARKETS – and never will you read a more worthless piece of garbage in your life. It is a good example of what is wrong with conventional investment news and correspondence.

To begin with the article opens with a fallacy: “The biggest economic report of President Donald Trump’s tenure is due out Friday: first quarter GDP.”

We all know that first quarter 2017 is the first economic report since President Trump took the oath of office. But “first” doesn’t automatically equate to “biggest.”

I don’t think so. Which of Trump’s policies has been enacted by Congress to improve the condition of the stagnant economy?

So you can say that Myles Udland lost me at hello.

To bolster his erroneous position Udland quotes a gentleman named Neil Dutta, an economist at Renaissance Macro – who should either resign from his post or sue Udland for defamation. Above a picture of Trump, Dutta is quoted, “The data are real, but the news is fake.”

Here’s Dutta’s explanation for his “fake” statement and the first quarter results, “The weakness [was] driven by soft consumption and a sharp inventory drawdown. However, underlying growth is considerably stronger.”

Soft consumption is the reason production was slow and inventories were depleted. Weak demand presented businesses with no good reason to ramp-up production and hold higher inventories – which they would have done if growth was “considerably stronger” – which it wasn’t.

The “data” Dutta is referring to is Gross Domestic Product (GDP) – which happens to be the best and most inclusive fundamental of economic activity. Dutta correctly calls it “real” but labels the reported numbers as “fake.” In that statement I’m not sure if Dutta was taking a potshot at Udland’s poor work or if he actually believes the economy is strong. The former would be valid; the latter is stupid.

From there Udland shifts to Global Chief Investment Officer of Fixed Income products at BlackRock financial, Rick Rieder, who’s position Udland summarized like this, “GDP simply does not capture technology and the changes this has wrought on the economy efficiently.”

That’s just silly. The definition of GDP was changed under the Obama administration to include technological investments. But forget about that for the moment. There’s a more salient point to highlight.

First of all, every one of those items Rieder points out are actually included in the GDP calculation. And secondly, isn’t the reason cars and air travel are so prevalent in the world today because technology has advanced so greatly that those things are affordable to so many people?  And aren’t the technological advancements in shale oil drilling somewhat responsible for the drop in gasoline prices, which aids in higher consumption rates (demand)?

This pathetic piece comes to a staggering conclusion: “The challenges for policymakers and economists is figuring out how to best capture what works and what doesn’t in our modern economy. And GDP often falls short.”

I’m not quite sure how Udland can come to such a conclusion when he obviously doesn’t understand the definition of GDP, how the market works, and how technology factors into market dynamics. This, not to mention, that his conclusion has absolutely nothing to do with the title of his article.

No wonder there are so many confused investors in the world today.

First quarter 2017 GDP has followed the same lethargic pace of the last several years; Real GDP increased just .7%. But that is not indicative of a Trump economy. Trump has done nothing to change the direction of the economy, and so this first report can no way be the “biggest” of his tenure so far. Through the first quarter of 2017 Trump simply presided over the continuation of the Obama economy. If you wish to charge first quarter weakness to any one person then charge it to Mr. Obama; his policies still rule the land.

To find “big” economic news reports for President Trump in the first quarter I would point to decisions made by Big Auto to cancel plans to move production to foreign markets and to expand U.S. production, the approval of the Keystone Pipeline, and more recently, the easing of regulations to drill offshore and in the Arctic. Trump had a hand in these things, and at some point in the future they will have a positive effect on GDP – I stress: they will have a positive effect at some point in the future.

So yes it is true that GDP is limited, as it cannot account for positive changes happening in the marketplace until those changes start producing positive market activity. But that doesn’t mean GDP isn’t calculated right or is in some way fake or misleading. If the economy were strong GDP would reflect it. Fact.

But that doesn’t also mean that the stock market won’t provide a completely different message than GDP numbers reflect. The stock market can and does “price in” changes before they actually improve or diminish economic activity. This is the case in the stock market today.

Since Trump won the election stocks have gained 14%; gold is down 1% and yields have jumped 23%. See below. 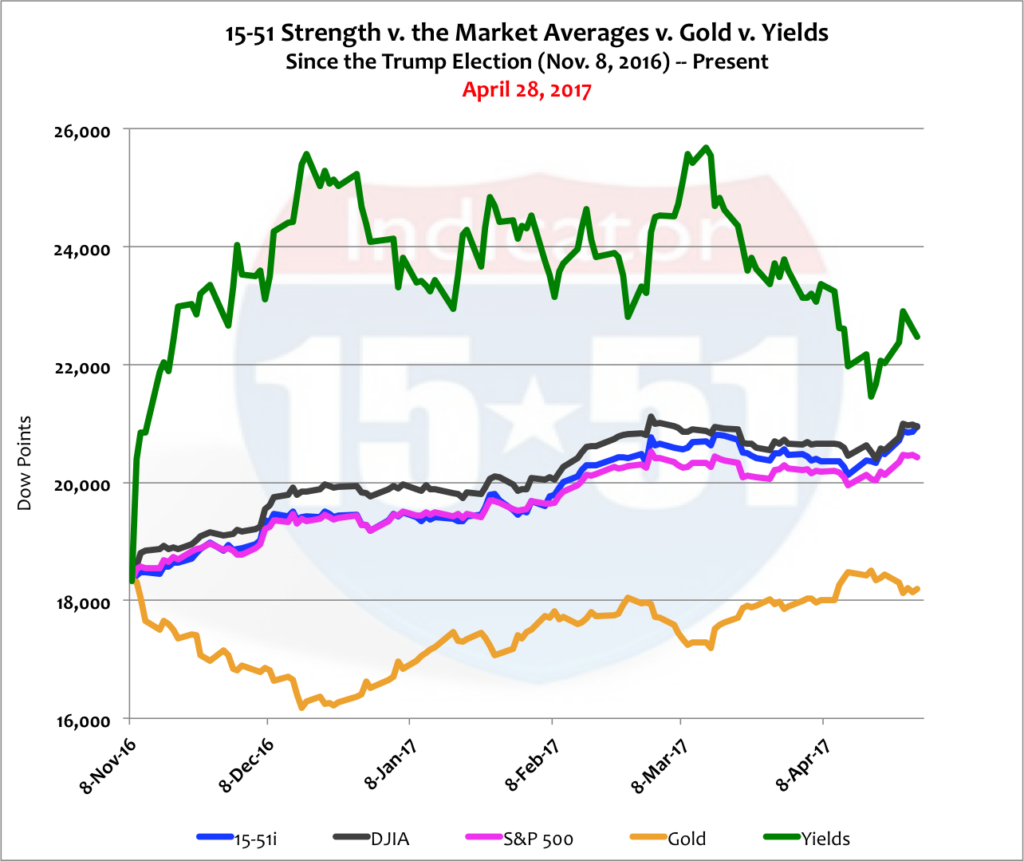 These trends are consistent with the expectation of Trump policies being put into effect – which is looking more and more like a long shot everyday. His effort to repeal and replace Obamacare has already failed twice in the Republican controlled House; his budget has no chance of Congressional approval as both Parties hate much of his cost cutting plan, and his ambitious tax plan, which is good for markets, has the major obstacle of an opposition Party hell-bent on stopping everything Trump puts forth.

For the record, the biggest economic report that Trump will face in his first term is one that follows the implementation of his tax plan. Fair people will give his plan two quarters to take hold and start bearing fruit.

And if history provides any guidance, GDP growth will double in due course and tax revenues to the federal government will increase. That’s a dynamic that has repeated itself each and every time for the last 100 years. Calvin Coolidge, who presided over the economy of the roaring 20’s, benefited greatly from cutting taxes; as did John F. Kennedy, Ronald Reagan, and G.W. Bush.

So the question before us today is: Will Congress let Trump be the next presidential benefactor of a tax cutting plan?

On this day, if I were king three people would lose their jobs (Udland, Dutta, and Rieder) and Trump’s tax cut plan would go into effect and be retroactive to January 1, 2017. And then the king of all economic fundamentals, GDP, under its current make-up and definition, would predictably and reliably reflect what policymakers should have anticipated from the very beginning.

Growth and tax revenues up strongly, and stocks up sharply.