February 8th seems like a lifetime ago, as discussions of “correction” and Bear Market have faded into the distance. Since that low point stocks have regained more than 80% of their losses and are just 4% off their all-time highs achieved on January 26, 2018. It has been a rocky road indeed – but then again it’s the stock market, and that kind of travel is not uncommon. See below. 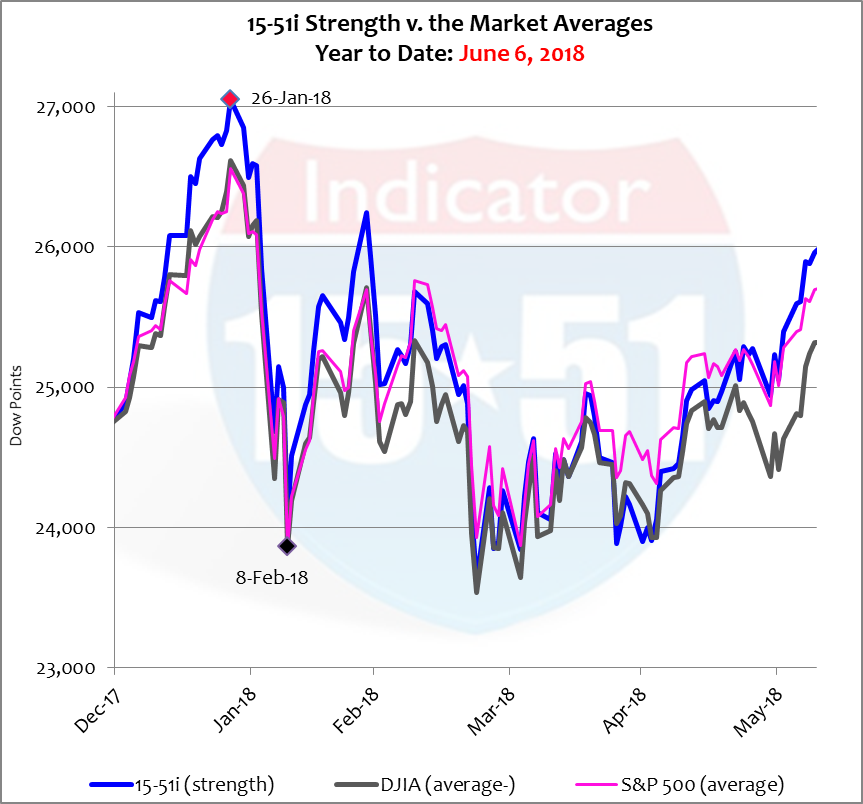 So why the volatility?

First, it is important to appreciate how high stocks are presently valued. The last time stocks traded at this multiple was during the heat of the tech-boom in the 1990’s. Back then GDP growth in Real terms averaged 4.3%. The housing-boom, which produced the worst correction experienced since the Great Depression, averaged 3.2% in Real growth – and stock valuations during that expansion never approached today’s level. Obama’s QE-boom averaged 2.3% Real growth, which is a level Trump has matched since taking office. Below is a chart showing the trend of multiples the Dow Jones Industrial Average has traded to GDP over the last 20 years. 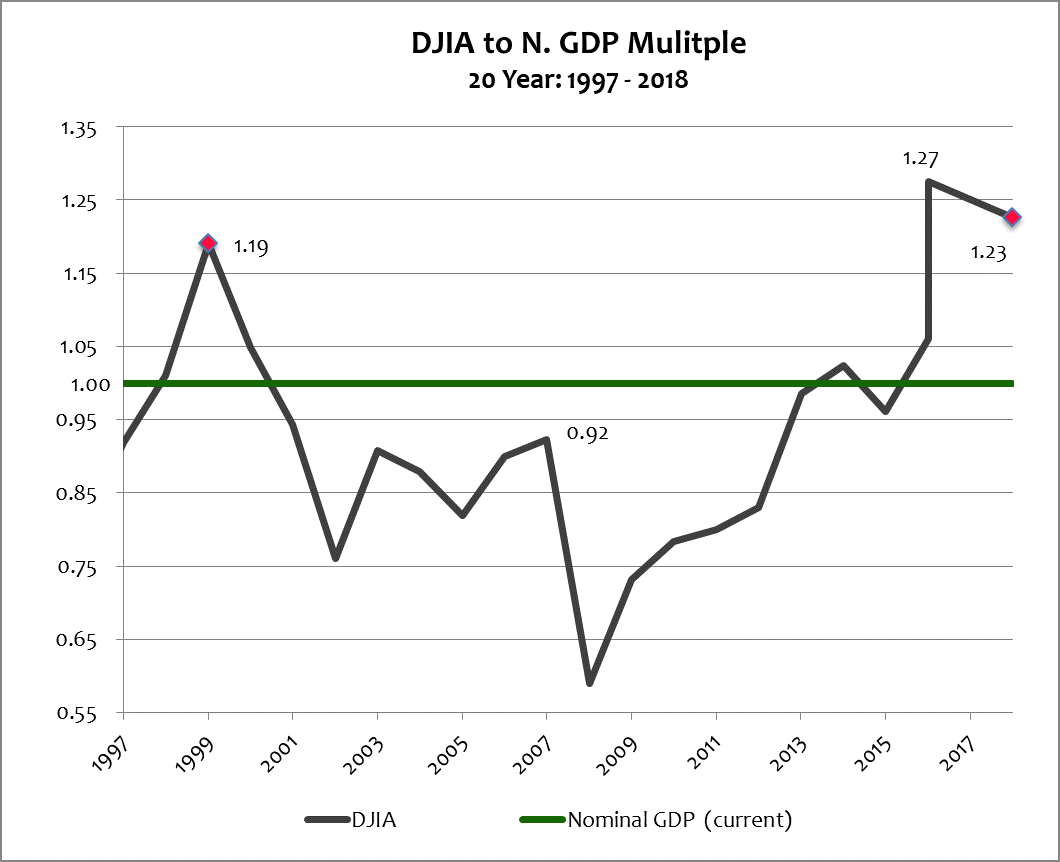 As you can see, stock prices are not low. And whenever stocks are this pricey institutional investors get antsy and tighten their trading tolerances, and so any kind of negative data – or sentiment – can send shockwaves throughout “the market.” Investors should expect to experience a higher degree of volatility during these times.

Second, many market followers were hoping, and speculating, that the Trump tax cuts would be potent enough to break the trend of weak first quarter growth that became epidemic during the Obama years. But we have had no such luck. Q1 growth was 25% lighter than the prior quarter (Q4 2017), and 15% slower than the average rate of growth for all of last year (2017). Coincidentally, the estimate that initially announced weak Q1 growth arrived on the day stocks hit their all-time highs (January 26).

The reason for the continuing trend of weakness is because the Trump tax cuts were too small for the largest segment of the economy (individuals), and therefore unable to reverse the effects of bad policy (more on that in a bit). Add to this potentially higher foreign tariffs and a stronger currency that could offset any real gains projected for the corporate world, and all of the sudden stocks look a whole lot richer than they did before.

Third and finally, it’s easy to forget that the last two years have been huge gainers for the stock market, averaging 18% ROI per year under a weak and uneven economy (1.9% growth.) If Trump got what he promised during the campaign – a highest individual tax rate of 25% and a corporate rate of 15%, and a repeal of Obamacare – perhaps current valuations could be considered reasonable. But we didn’t get that – far from it, in fact. This dynamic put stocks way ahead of themselves… And now there’s a trade war, a currency war, persistent military war with threats of escalation, and a political war that is bleeding into all factions of the populous.

Irrational and unwarranted divisive politics have stoked celebrities into polarizing civil discourse and debate. First it was Michele Wolf, then Samantha Bee, and now Roseanne Barr. The Left can say and do anything they want with impunity and the Right can only say and do whatever the Left allows. Nothing highlights this better than the dichotomy of how Barr and Bee have been treated by their employers.

The fight brewing in this country is now starting to get violent, as can be witnessed through recent confrontations in Oregon between Antifa and Patriot Prayer. One feels superior to the other and the other feels oppressed. Not a good recipe for peace and prosperity; and for as long as this nonsense festers real issues will continue to fall by the wayside.

For instance, the Affordable Care Act is proving to be the debacle it was projected to be. Healthcare costs are on a sharp rise while profits to health insurers have skyrocketed, and if the American people knew how terrible and corrupt this law truly is a revolution would already be underway – the People versus government. But instead we are fighting ourselves and losing the war, liberty and wealth.

As an example my group health insurance policy got tagged with another sharp premium increase this year – 49.5%. Premiums for middle-aged working families are between $2,500 and $3,500 per month (after taxes) and with a $14,700 (after tax) maximum annual out-of-pocket deductible, families must earn $100,000 gross income per year just to pay for health insurance. Think of how absurd that is.

Consider it in this context…President Obama defined “rich” as those who earn $200,000 per year or more – or put another way, his idea of a rich family is $100,000 of earnings for health insurance and $100,000 for living expenses – BEFORE TAXES. This steals money from workers and limits the amount of money they can circulate in other parts of the economy. In other words, it limits overall economic growth and produces outrageous inflation in just one segment (healthcare).

According to Obama and his namesake law a 50% tax on gross income for healthcare is fair for working class families so that non-working people can get insurance for “free.” That kind of rate is an egregious amount above the tea tax that sparked a prior century’s revolution against an overbearing government whose ideology superseded the will and desire of the People while depleting the riches they so rightly earned.

But as long as we allow ourselves to be distracted by the antics of the Left and Right we fail to address the real issues that face our country – and then nothing gets done, nothing gets resolved, and things only get worse. That’s the effect of Trump Derangement Syndrome: Divided We Fall.

Perhaps traders took pause to assess these dynamics. And with a glance across the pond where things are much worse than they are here, a stock market pullback accompanied by a healthy dose of volatility seems more than appropriate.