Ever since Trump took the reins of the stock market it has exuded many of the qualities of the man himself – bold, optimistic, arrogant, and erratic. And now another adjective can be added – resilient.

While it has taken longer than a blink of an eye almost every major stock market index has regained its January 26th high. Only the lowly Dow Jones Industrial Average remains shy of its 2018 peak. It’s still two points short. It also should not be overlooked that while stocks are up strongly in the nine months of 2018 (averaging +8%) they have averaged an 18% gain in the most recent 12 months – and 46% since Trump won the election (almost 2 years). That’s a blistering pace for any market economy – an indication that a full-fledged economic boom is underway. See two-year trend below. 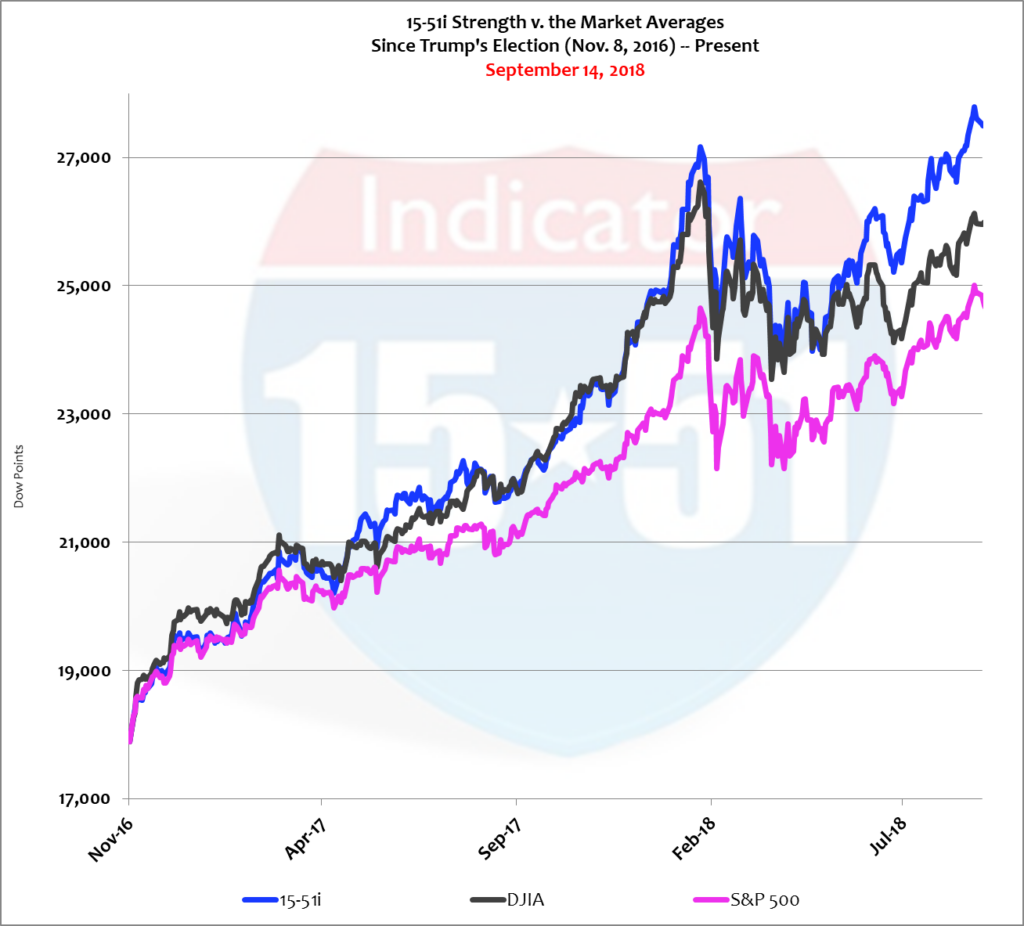 Indeed economic progress is stronger, averaging 3% per year, but growth remains unreliable and uneven. Labor is tight but wages aren’t increasing in kind. That’s because inflation is back and interest rates are on the rise. So what is actually going here is a modest economic expansion, not a boom – regardless of what the stock market is trying to tell us.

In fact, the only way stock prices can be justified at these levels is if you only consider positive U.S. fundamentals. Forget about all the negatives – and forget about the rest of the world. Everything is great – S&P 3,000 here we come!

The build-up to this correction is so reminiscent of the last. Back then IndyMac and Washington Mutual were just a few “isolated” cases and “not systemic” of the financial industry as a whole. The reason no one on Wall Street saw disaster coming is because they were enthralled with all the positive fundamentals – spending, growth, and the mighty advance of stocks. And then boom! Surprise, surprise.

The only way to get blindsided by stock market corrections is to be blind to a whole side of the market equation. Wall Street and Washington DC fall victim to this shortsightedness all the time.

Banks don’t just fail all of the sudden. Crisis conditions exist long before collapse. For instance, only 3 banks failed in 2007, in what can be considered a “normal” level. Ten times that number failed in 2008 (30 banks) before 148 fell in 2009, and then another 157 more in 2010. In all some 520 banks went belly-up over a 7-year period before failures returned to “normal” levels – and somehow no one on Wall Street (financial market participants and analysts) or in government (those who regulate and supervise the financial markets) saw such a cataclysmic epidemic coming.

Only corruption can be so blind.

The same conditions are present today.

Today institutional investors are again enamored with only economic positives – growth, spending, low unemployment, and a raging stock market Bull Run. How easy it is for them to shrug off the Trade War, tariffs, rising inflation and interest rates, while a second round of  debt crisis looms.

The next major correction will be much larger than the last two because there is more currency in the system, more inflation, more debt, and more corruption present in this market than the last. These conditions are holdovers from Obama’s QE-boom, from which the world market has never corrected. Remember, the U.S. invented QE but the world bought in. That’s how emerging markets got in such deep hot water.

But as of today Argentina and Portugal are just “isolated” cases; Venezuela and Turkey, too. Ditto for most of Europe including Greece, Italy, Spain, France, and Russia – not to mention troubles in Iran, Cuba, North Korea, and China. The world market is in shambles – built on too much debt carried by borrowers with little or no chance of repaying.

That said, the only way to value stocks up this high is to neglect to see the world as one huge interconnected market, to only see certain positives, and to turn a blinds eye to the negatives staring us all in the face.

The housing-boom was a lot like the tech-boom in that millions of individuals and every sector of the economy participated in the run. Wealth was being created everywhere, wages were rising swiftly, unemployment was low, and inflation was in check. Consumer demand was the main driver of growth for both. Their major difference was in the way they corrected.

During the tech-boom-correction economic recession coincided with a receding pace of technological innovation and growth. Hey, it happens. All cycles come to an end.

The housing-boom, much to the contrary, ended when subprime borrowers were unable to pay the unfeasible debts they incurred during economic expansion (thanks to easy money for individuals with poor credit), and were unable to borrow more to continue their pace of spending. This caused recession, and ultimately the collapse of the money and credit markets.

The same thing will happen in the next correction, with one small difference.

Today’s subprime mortgage borrower is not John Q. Public but instead Greece, Argentina, and Portugal, etc. etc., who accumulated unfeasible amounts of debt during the QE-boom (easy money for sovereign nations with poor credit). And when they default it will not be just sovereign nations that will fail but also central banks, their underlying currencies and debt instruments. All will lose tremendous value that will hamper global trade and zap investor portfolios at every corner of the globe.

In other words, tomorrow’s Lehman Brothers will have a flag instead of a corporate charter.

Sad to say that same condition will occur within U.S. borders, as highlighted by this WSJ headline from August 23, 2018: Chicago’s New Idea to Fix its Pension Deficit: Take On More Debt. How stupid is that?

It is impossible to borrow your way into prosperity. That’s a lesson we should have learned in the aftermath of the ‘08 disaster.

Chicago is the modern day version of a U.S. subprime mortgage borrower, and yet another example of how some of the great Empires in world history failed to see failure coming. Ruling elitists thought they were too smart to fail, or too clever. And they were foolishly wrong.

Those who cannot afford themselves today will collapse under tomorrow’s conditions.

Did I mention that inflation and interest rates are on the rise?

That environment will only make borrowing and debt servicing harder.

Many economists, including the Federal Reserve, are projecting the next recession to occur in late 2019 or 2020. That seems about right, and perfect timing to throw a wrench into Trump’s re-election campaign – just as the establishment so badly wants. Until then this expansion, and a blind stock market, should continue their trends until emerging markets begin to fail in epidemic proportions.