GONE BABY GONE highlighted my contempt for Nike’s decision to glorify the unpatriotic action of kneeling during our national anthem with a multi-million-dollar ad campaign featuring the leader of the movement, former NFL quarterback Colin Kaepernick. That was reason enough for me to sell the stock and replace it with German competitor adidas in my 15-51i portfolio. And while I am not one to constantly tinker with my portfolio, nor do I advocate such practice, managerial malpractice has once again called. This time it was Boeing who rang the bell.

Two fatal airplane crashes, one in October 2018 (Lion Air) and the other in March 2019 (Ethiopian Airlines), prompted world authorities to ground Boeing’s new 737 commercial airliner called the MAX. A reluctant U.S. Federal Aviation Administration (FAA) – not an innocent bystander in all of this – was the last to make the decision to ground the MAX.

It smelled rotten from the very beginning.

But Boeing’s stock dropped only 7% in the wake of the first crash, as initial reports suggested it was pilot error that downed Lion Air’s brand new 737 MAX. That shift in blame, from airplane-maker to airplane-flier, allowed the stock to completely reverse that loss in just a few days’ time – despite reports of the downed plane’s irregular movement pattern beginning shortly after takeoff, and insinuations that they were connected to faults in Boeing’s new inflight software system, called MCAS.

But Boeing’s stock continued to shrug off any kind of direct indictment, and in fact, reached a new all-time high ($440) five months after the Lion Air crash, on March 1, 2019. Nine days later, on March 10, news of the second crash broke. And it has been all downhill ever since – and rightfully so. Boeing’s behavior has been as egregious as it has been appalling.

Both crashes were related to the same fault: error prone Angle of Attack (AOA) sensors were not properly programmed to overcome corrupted data. This one malfunction has highlighted systemic managerial flaws within Boeing: Flight manuals were lacking; Training was irresponsibly light; Communications were inadequate, inept, and at times corrupt.

Boeing had a glitch in their software that when AOA sensors sent bad data to the autopilot system it was used to maneuver the plane in an attempt to correct a problem the plane didn’t have. Their new software should have discarded, bypassed, or alerted pilots of the inconsistent data being sent by AOA sensors. But it didn’t do that. Instead it used the bad data knowing it was bad.

And to make matters worse Boeing’s new MCAS software was dialed-in so strongly that it was impossible for pilots to take control over the plane even while knowing that AOA sensors were malfunctioning.

Imagine being a skilled pilot incapable of wrestling the plane away from a pre-programmed doom – all because Boeing rushed a new model to market and bought the government’s approval to do so. How else could such a thing happen in this day and age?

And it gets worse…

Additional safety features critical to override erred sensors, which had been standard equipment with every other version of the 737, were not included with the base model of their new 737 MAX.

Would love to meet the brain surgeon in marketing who thought of that.

Boeing has been such a disappointment that it hurts to watch. For instance, it was recently discovered that Boeing changed its development process with the MAX to dramatically minimize or eliminate the role of their test pilots during the final stages of development and delivery.

Can’t imagine a good reason for that.

And still it gets worse…

Somehow Boeing – the perennial airplane maker in the world, mind you – failed to communicate to Southwest Airlines that AOA sensors were not activated on their new MAX jets. The Southwest planes had the AOA sensors, of course, as all planes do. But they just weren’t connected to Boeing’s new inflight software system.

So the sensors were there, but not hooked up. Hook up was extra, and Southwest didn’t buy it because they thought they had it – for two years!

Investing is an extremely personal thing when you make them part of your life. You get to know them in a personal way because you experience them as you watch them compete in the global marketplace. Market experiences, perhaps the best way to assess value and managerial competency, accumulate over time and strengthen the relationship you have with your investment dollars. So it feels great when they make you proud.

But it hurts like hell when they disappoint you.

I am a frequent flyer on Boeing airplanes and have flown on the MAX jet with the largest buyer of that model, American Airlines, who thankfully purchased the safety options for all their planes. If I owned an airline stock it would probably be American because I fly it more than any other brand and like the way they do things. Their attention to detail in the aircraft can be tied directly to their managerial offices – who knew that safety wasn’t standard with the MAX model and worth every penny of its option price. I salute the diligence of their entire organization and their commitment to passengers like me. Shareholders of American Airlines should be very proud of their company today.

Owners of Southwest should be very skeptical of theirs. How could they not know that critical safety features were not included with their new MAX airplanes?

And then there’s owners of Boeing, who should be as angry as a stuck pig because something we thought we knew so well let us down in the biggest and worst kind of way. Our beloved airplane maker put money ahead of safety and threw caution into the wind.

The managerial weakness displayed by Boeing proves it is no longer fit to be included in a portfolio built to indicate stock market strength. As a result, it has been removed from the 15-51 Indicator™ (15-51i) as of May 6, 2019.

And while it can sometimes be difficult to replace a partner that has been so profitable for so long, that wasn’t the case with Boeing. My first instinct was to replace it with United Technologies (UTX) and I stuck with my gut.

You may recall that UTX was an original member of the 15-51i portfolio. It was eliminated in 2015 not because of anything it did or didn’t do, but because I needed to make room for Apple, which rejoined the portfolio when it was added to the Dow Jones Industrial Average. A move had to be made in my Technology allocation and either it or Boeing had to go. Boeing won the day back then because I had a closer connection to its products. That was then. Bad management has now disqualified it.

Boeing and United Technologies service the same markets, differently, and generate revenue from the same spending classes – and both are Dow components. Together these characteristics helped my portfolio maintain the same level of connection to “the market” as it had with Boeing.

Familiarity, solid management, and a long track record of success made the change easy to make. UTX was simply a good fit.

So a new chapter in the history of the 15-51 Indicator™ begins, and that’s always a good time to review the entire portfolio scheme – especially because it hasn’t been performing as strongly as I expect, and demand. And while it remains a dependable above-average performer, the 15-51i portfolio is not without its flaws. Its year-to-date performance speaks for itself. See below. 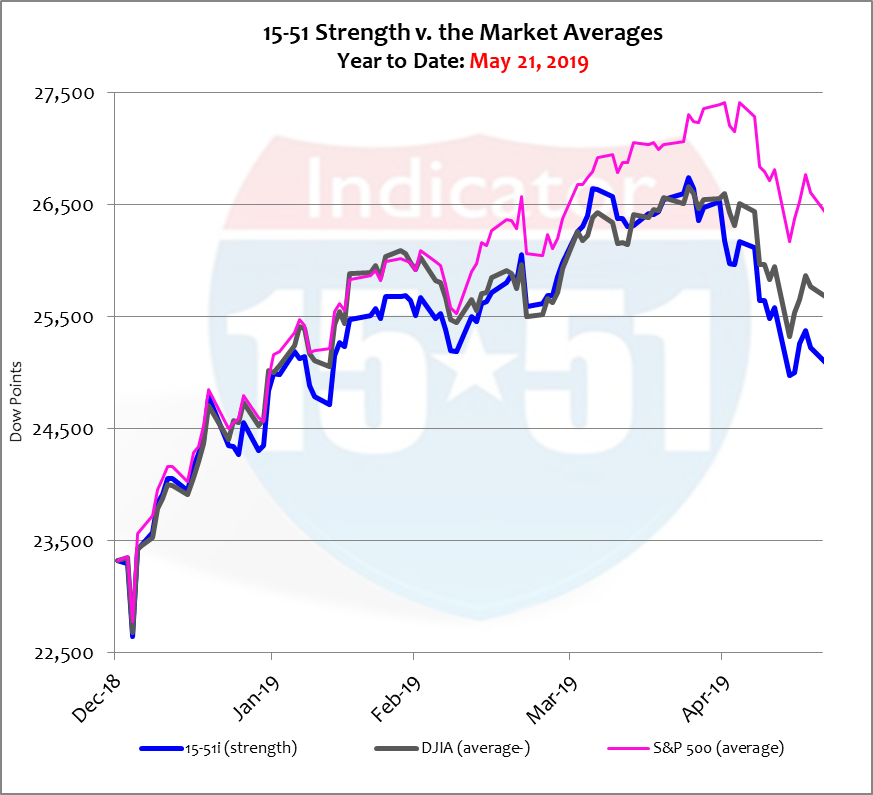 Ironically the biggest portfolio of the bunch, the S&P 500, is the best performing so far this year; it’s up 14%. The Dow Average has gained 11% and 15-51i Strength has added just 8%. And while eight-percent is a legitimate five-month return I am way too competitive to be happy with a below-average trend, regardless of ROI.—And while I wish I could blame all of my performance woes on Boeing, I can’t…

United Healthcare began to correct just two days after THE FAILURE OF OBAMACARE SHOWN IN ONE STOCK was posted in the midst of an ever-expanding MEDICARE FOR ALL movement. Before that 3M disappointed with a big earnings miss and lowered expectations for its future. It has been the biggest loser in my 15-51i portfolio this year, down 11%. Wells Fargo and Honda Motor Co. haven’t lost much this year but their persistent lack of performance is starting to annoy me. All four stocks are under review.

Pricing anomalies always occur, especially in the short term, where larger portfolios can outperform smaller ones. While those abnormalities are infuriatingly possible, they’re not worth obsessing over as long as your portfolio continues to achieve long-term objectives. And mine has.

Remember the purpose of the 15-51 Indicator™ is to indicate how stock market strength is performing, not stock market greatness. It produces above-average results, not great results, because it is an above-average portfolio, not a great one. That’s why I can live with a few underperforming stocks and still succeed.

The 15-51 Indicator is a successful portfolio because it consistently delivers on its dual objective mandate: market-like movements and superior long-term performance as compared to the Market Averages, which it does reliably. See below. 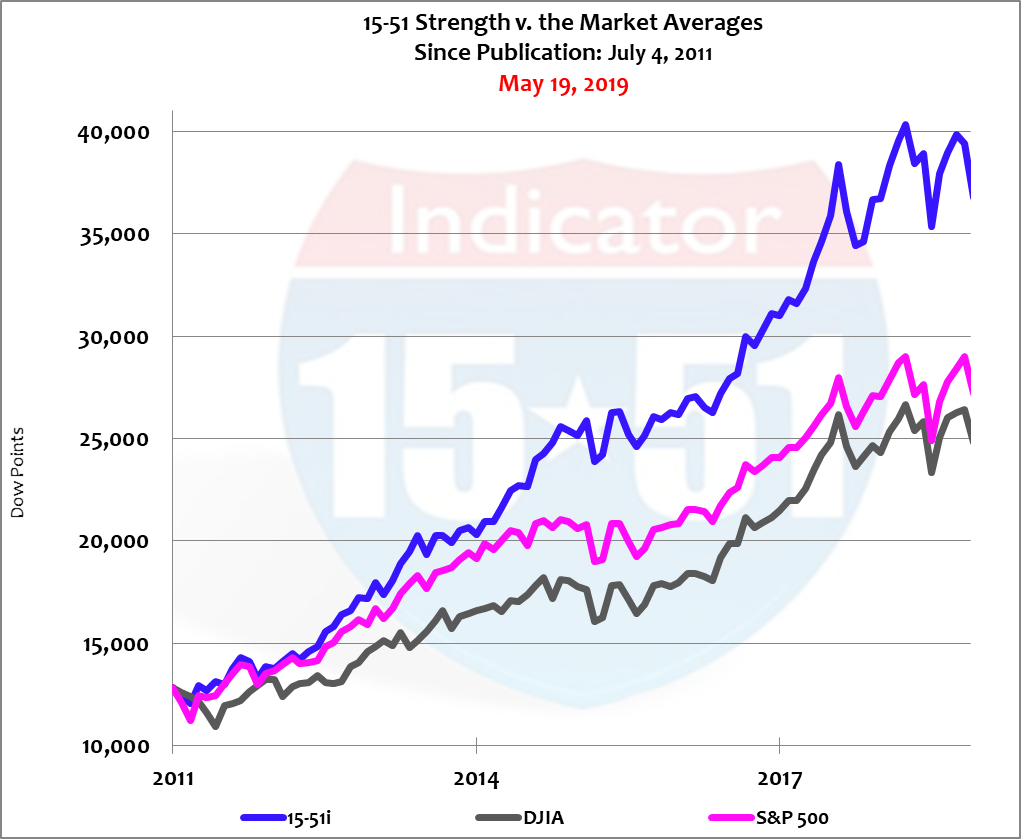 In the eight-years since publication the 15-51i has produced an above-average 209% (or 27% per year) return on investment compared to the Market Average[1] of 109% (or 14% per year). Long-term success, and because industry allocations remain close to targets, are why I am comfortable not making any additional stock moves at this time. There’s plenty of time for that.

Right now it’s strictly United Technologies for Boeing – because any CEO thinking safety isn’t standard equipment is not worth the risk of investment.