In yet another gross display of managerial incompetence Nike gave its investors another great reason to exit the stock. Their recent decision to pull shoes featuring the first American flag from the shelves during this year’s July 4th celebration is almost as stunning as making former NFL quarterback Colin Kaepernick the face of their brand. It was Kaepernick that convinced Nike to remove the sneakers from circulation because the flag, he believes, is a symbol of racism and hatred towards black people.

Kaepernick is an ignorant fool, which is the reason he is no longer playing in the NFL. Yet somehow he is in charge of Nike’s political messaging and along with it the great power to control what products get released to market and which ones don’t.

What has Kaepernick ever done to earn such power and authority?

It is impossible to understand Nike’s thinking here. Only the oblivious can suggest that the Betsy Ross flag is a symbol of racism. Facts be told the American Revolution had nothing to do with black slavery. That is the reason the text of the Declaration of Independence was crafted so carefully.  Before revolution the Colonies were free to establish their own regulations under British common law, where slavery was legal. The Spirit of ’76 wasn’t about the north taking on southern values. It would have been futile to try and fight the Civil War at the same time as the Revolution. That was a fight for another day.

The American Revolution was instead about the People of the thirteen original Colonies uniting against a tyrannical, ever-expanding and more dominant central government. It was a fight between a fledgling thirteen-colony democracy against the big bad British Empire, in a battle for independence and self-rule. It was freedom versus oppression inflicted by a distant monarchy. Skin color had nothing to do with it.

Independence and the right to someday abolish slavery could never have been won without the unification of southern plantation farmers that owned slaves and New England industrialists that found slavery abhorrent. They had to work together – they had to unite – if they were ever to win.

Ratification of the Declaration of Independence did not happen without much debate. In the end the Colonies unanimously agreed by way of their signatures on the founding document. The banner for that revolutionary edict is commonly known as the Betsy Ross flag, but it is also called the Colonial Flag or the Revolutionary Flag. Whatever the correct name may be the flag is a rallying cry that certain truths are self-evident, “that all men are created equal, that they are endowed by their Creator with certain unalienable Rights, that among these are Life, Liberty and the pursuit of Happiness.”

White Americans didn’t sacrifice everything for the black cause until the Civil War was fought almost a hundred years later (1861). The Stars and Stripes, and the truths it represents, won that day too.

For Nike to spit in the face of all those Americans who believe the Betsy Ross flag is the quintessential emblem of American promise is the worst kind of sin an American business can ever commit. Alienating 50% of the consumers in the world’s greatest market is incomprehensible.

Nike stock is a “sell” in the highest order. Their management team is spineless and bankrupt, deplorable and incompetent.

Kaepernick, who is adored by the Left wing, is perceived in those circles to be some kind of a hero or martyr for disrespecting our country, her flag, and the national anthem. He rose to fame as a marginal football player in the twilight of his failing career for kneeling during our national anthem to supposedly protest against police brutality. But now Kaepernick has shown his true colors: he thinks the American flag is a racist symbol for hatred towards blacks. That is his protest.

And Nike’s management obviously agreed with his assessment because they pulled the Flag shoes from the market during this year’s July 4th holiday.

Nike’s managers are as dumb as Kaepernick.

Only fools and anti-American proponents shall remain invested in the stock. The Dow Jones Industrial Average and S&P 500 should immediately eliminate Nike from their market indexes because it doesn’t represent the American market in any positive or legitmate way. Having Nike in their portfolios runs contrary to their objectives.

That is the reason Nike was eliminated from the 15-51 Indicator portfolio in October 2018 (see: GONE BABY GONE.) Since then investors have proven my choice a good one. Adidas has outperformed Nike by almost 400% since I made the move, gaining 31% versus 8% respectively. See below. 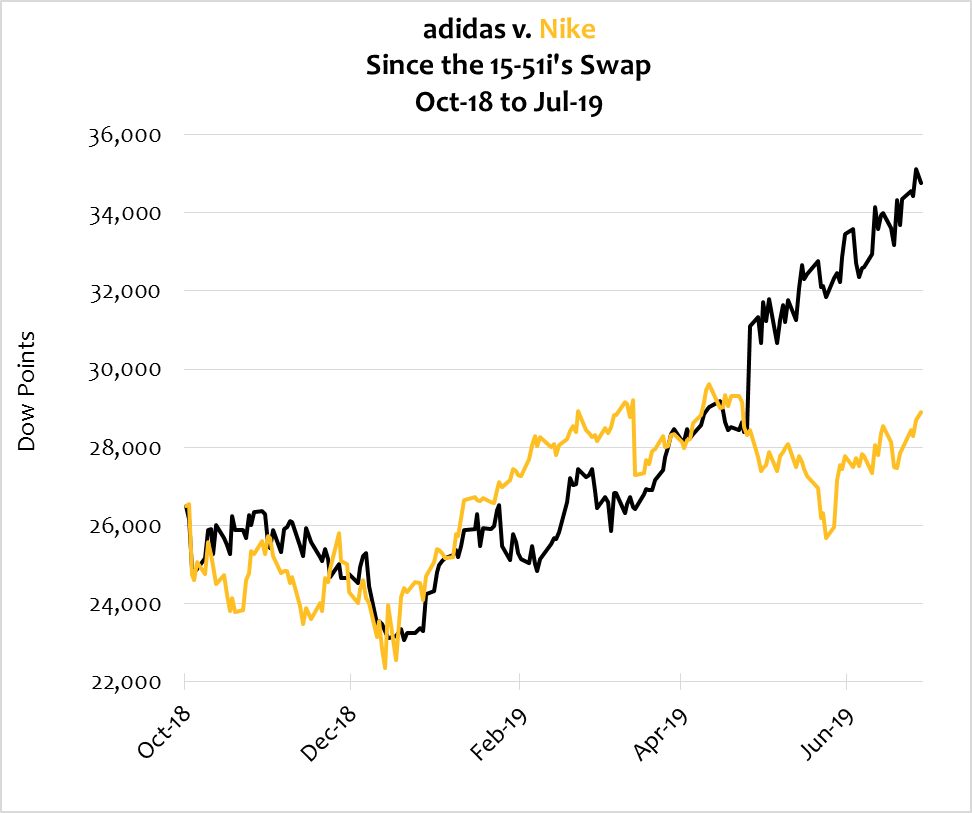 When management does something you hate, dump it. Who cares what everybody else is saying or doing. What you perceive as bad business is bad business. No one should talk you out of it. There’s no good reason to stay attached to a stock that you don’t love. There are plenty of fish in the sea.

America is the largest market in the world because it has the richest and most powerful consumers. Piss on a large number of them and it will be bad for that business, and its investors. Investing is really that academic.

By the way, shortly after Kaepernick and Nike got married adidas announced a new partnership with Beyoncé – and besides being smarter and more talented than Kaepernick, she’s also tougher than he is.

My money is on her and adidas.