It’s a shame that so many people still feel they can’t invest successfully on their own. They incorrectly believe that managing a portfolio is high finance and stock picking is rocket science. Those false perceptions are exacerbated by a common belief that investing demands too much time that involves constant attention and tinkering. So not true – and I am living proof.

With my book and these blogs it may seem as though I live, eat, and breathe the investment markets 10 hours a day, 7 days a week. But like most of you I have a day job that dominates the majority of my waking hours; writing and blogging about investment is just a part-time passion. And trust me on this one, it takes much longer to document my investment views than it takes to actually arrive at my conclusions. In fact, it takes me only minutes a day to connect to my investments, size up the market condition, and take appropriate action if necessary.

I proved the theory that constant attention and tinkering were NOT required to be successful with investing while writing LOSE YOUR BROKER NOT YOUR MONEY. During that seven-year period I totally unplugged from the investment world for large blocks of time (weeks, months, and half-years) for the simple reason that I could not change the 15-51 Indicator™portfolio. It had to remain constant so that I could write about its movements in a consistent, static, historical way. During that time (2004 – 2011) the performance of those stocks allocated with 15-51 design vividly proves the point: even with total neglect my method outperforms “the market” and thus the vast majority of all mutual funds. See below. 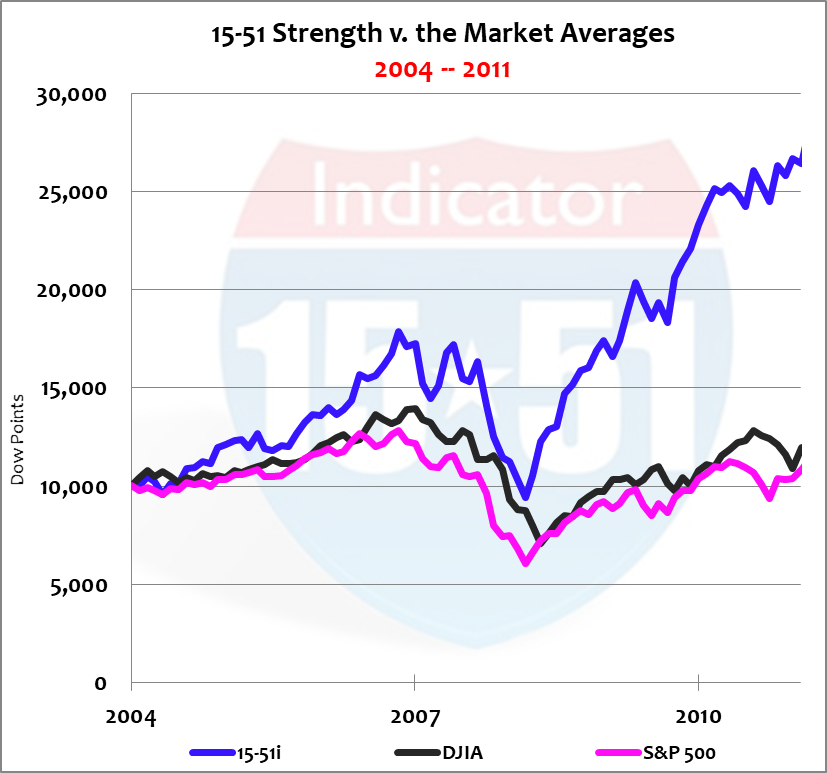 This whole investing takes too much time involving constant and immediate attention thing is a total farce. It is simply part of an advertising campaign marketed by the Wall Street establishment.

An alternative does exist.

Written in plain language that is easy to understand, LOSE YOUR BROKER NOT YOUR MONEY details my successful methods, strategies, and tactics that cover every possible angle of the investment process, all of which can be easily worked into any busy schedule. Those techniques are practiced here, in these blogs, so that readers can appreciate how I employ them, and for what reasons. What makes me different is that I don’t tell investors what to do; I show them how I do it so that they could make investing a personal experience for themselves. That is the easiest and most rewarding way to reach financial independence.

Looking at the world in this new way takes practice, indeed, but given the time and attention it will become second nature – and that’s when investing really gets easy, and fun – which is a feeling you can’t get by turning your money over to the Wall Street establishment. That feeling is more akin to handing your wallet over to a thief for safekeeping. Their rap-sheet is lengthy, which causes an ill feeling. And there’s nothing fun about that.

The easiest way to succeed with investing is to make your portfolio a reflection of you, and in line with your individual beliefs, spending patterns, and objectives. Not mine. Yours. The best investments for you are close to where and how you spend money. That brings your investment portfolio closer to you and into your daily life. That kind of intimate connection makes everything related to investment easier and more rewarding. With my book and support you have everything you need to invest successfully.

Common sense, basic math skills, and your market experiences make you more than qualified to understand and succeed — and every investor has them. Fancy degrees from branded institutions are not prerequisites. Success only demands a plan, core principles, and a winning method of operation. All of that is practiced here.

For instance, my decision to sell Nike was as obvious as it was easy to do, even though it had an excellent run in my portfolio (+248%). I found the actions of their management disgusting, insulting and in poor taste, not to mention bad business practice. So I sold it.

And because I am so familiar with 15-51™ design, my stock components and objectives, I knew exactly what I needed to do to fill the hole Nike left. My market experiences directed me to adidas (AADDY) and the fundamentals corroborated their sound standing. Their performance since I made the move speaks for itself; its stock outperforming Nike by a factor of 4, or 400%.

Ditto for dumping Boeing. Their handling of the 737 MAX has been awkward, incompetent, corrupt, and insensitive. Needless to say they have been a huge disappointment. Selling it was obvious and replacing it with United Technologies was just as evident. The decision to act was once again made easier by the close connection to my investments, 15-51™ design, and clearly defined objectives.

The Nike and Boeing blogs demonstrate how to make portfolio decisions in line with your core principals. To me disrespecting the American flag and national anthem is unbecoming, and placing profit ahead of safety is repugnant. So ridding a portfolio of those two stocks is more gratifying than just making money because I defended my core values in the process. And while losing Boeing and Nike for those reasons felt good, nothing compares to the feeling when success follows great adversity. Target is a fine example.

You may recall that Target suffered a major security breach several years ago that exposed personal information for millions of its credit card holders. The stock took a beating because of it, and at the time I considered removing Target from the 15-51 Indicator — not just for the data breach but because of the new paradigm in retailing. It had me thinking, and I wasn’t sure what to do.

To help with the decision I visited my local Target store to see firsthand how the company was handling the crisis at store level. Discounts were abound (good move) and the staff was extremely courteous, making a point to thank me for “Shopping at Target” (smart). One of the things that drew me to Target in the first place was how well they operated at the store level. That’s good management. And I was happy to see that nothing had changed.

Staying connected and monitoring your investments can be as easy as going to the store and shopping. That’s how to invest at the grassroots of your life. In this way they’re not just stocks, they’re businesses, products, or brands that you know, use, trust, love, and now own. If they continue to meet or exceed your expectations then they remain worthy of your investment dollars. If not, it’s time to sell them.

Do you really need a financial adviser to tell you that Target is a good investment?

My decision regarding Target back then was also made easier because its intended replacement in my portfolio (amazon.com) was selling at an all-time high, and selling low and buying high is not cliché. And let’s face it, several government agencies have suffered major data breaches including the IRS, FBI, CIA, and Defense department. Target was just another unlucky victim.

So I stuck with them back then – which also meant that I had to add to the position in 2015 when the 15-51i portfolio was re-balanced because its performance was down.—That’s another reason you must love your stocks; you must be willing to buy them at any time, in any Market condition, and especially when “the market” is melting down – because that is where the real money is to be made.

Fast forwarding to today, health issues and day job demands have forced me to partially unplug from the investment markets (life will do that occasionally). During those times if I look for anything it’s bad news. The news surrounding Target was all positive, and quite frankly, I missed most of it. But a recent pop in its stock price caught my attention and compelled me to dig deeper.

It was nice to find Target making significant advances in an incredibly difficult market segment that has been dominated by Wal-Mart and amazon.com for what seems to be an eternity. Their competitiveness and attention to detail were two things that first attracted me to them, and it’s good to see they are still contending and winning in an extremely challenging category.

Target is causing a big sensation with a small concept. It’s a mini-store – with merchandise targeted to a specific customer base. And it has taken off. The company just opened its 100th “small-format” store this month, with no signs of  slowing down. And according to a company spokeswoman, “the sales productivity of Target’s small-format stores is twice our company’s average.”

Target is gaining ground on almost every front. Their Internet sales are up at least 25% for five consecutive years now, and 42% in Q1 of this year. They’ve expanded their successful curbside pick-up to all 50 states, a strategy that has pushed sales volume for urban customers higher by five times. They are rolling out a price promotion program called TARGET DEAL DAYS to compete against amazon’s Prime deals. And they recently struck a deal to test Disney merchandise in 25 stores. Revenues for the company are growing steadily, averaging 4% this year (or twice the rate of the economy) and profits and cash flow are strong. Target also raised their dividend by 3.1% this year (about twice the rate of inflation).

And investors have rightly rewarded them. 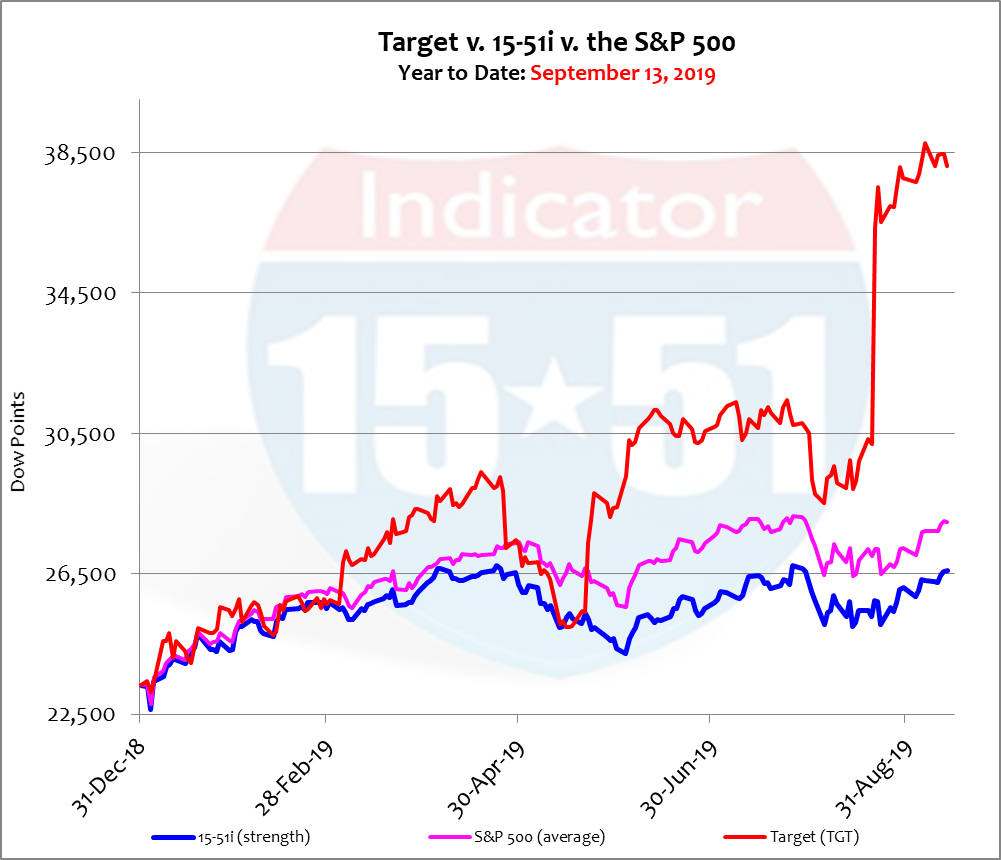 When you are close to the stocks you own, the companies, brands, stores or services, you should feel as if the management team works for you – because they do. And when they succeed it makes you feel good because you believed in them, invested in them, supported them, and then they rewarded you in return – and that’s the best part of investing. By far.

So very proud of Target’s management team that continues to hit the bulls-eye, quarter after quarter. Keep up the great work!