The long awaited 3rd quarter numbers were released a few days before the election and seemingly no one took notice. Stocks gained one-percent that day, Thursday, October 29, only to lose the same amount on the following day. And with the election just around the corner from that weekend, a typical Wall Street response would have been to digest the news during the two day layoff before returning to work Monday in full sales mode — a delayed reaction to the hint of inflation embedded in the GDP release (3.9%) — to throw a wrench into the equation late in the election cycle. But no, that didn’t happen.

Instead, and as if Wall Street secretly knew a Biden victory was imminent, stocks jumped 1.5% on the Monday before the vote was cast and then another 2% on Election Day, Tuesday, November 3 – a major applause for what no reasonable independent mind could consider a competent shift in government that would create more economic wealth and prosperity than what current governance has afforded.

So why, then, have stocks continued to soar?

Think of the most prominent policy Biden advocated during this campaign season. Raise taxes on the “wealthy” – which, according to his definition of the word, is 1 out of 3 of all Americans. One of Biden’s tax increases is to raise capital gains tax, taking it from 20% to 40%. One-hundred-million Americans, or just about one-third of the U.S. population, own mutual funds; and another fifty or so million own homes – all of which will incur double the tax rate under a Biden administration. That is to say that Biden considers anyone who owns a home or has a retirement plan “wealthy,” as all will incur a tax increase, unlike the middle class or poor, who don’t own homes or mutual funds in 401k’s.

Besides an unconstitutional national mask mandate that only fosters fear and diminishes individual liberty, Biden is also threatening another economic shutdown that is two or three times longer than Trump’s order, which logic dictates, would be followed by a much slower and stiffer relief effort. One indication of that peril is communist doctor Anthony Fauci, who Biden elevated to lead his administration’s Covid response team, is already recommending masks to be worn in perpetuity, vaccine or no vaccine.

Nothing could be worse for an economy already severely wounded by the “two week shutdown” Trump unconstitutionally advocated in March that still lingers today, and in fact is worsening. Such policies would drain infinitely more wealth and life from an economy already gasping for air and clinging to every last freedom. Recession would deepen, unemployment would rise further and benefits wouldn’t be enough to cover the shortfall – especially in the face of rising inflation, which would embolden fascist rioters to call for Universal Basic Income (UBI). All of this effectuates three obvious certainties: bigger government, more debt and deficit, less freedom and free market activity.

And that’s why stocks are up on the supposed Biden victory, because as a liberal, he will never allow Trump the Republican to outspend the patron saint of big government and debilitating spending, Barack Hussein Obama. There is little doubt Joe Biden will spend twice what Donald J. Trump did, and Wall Street is salivating at the thought of it – because it is they who will broker the deal for all the Treasury securities deficit spending creates, while at the same time getting greased with an equal amount of new money to “increase their reserves” – which is code word for, using it any way they damn well please.

QE is a bailout technique at its best, juice for laundering Treasury transactions at its purest, and hush money at its worst. It is a national ponzi scheme orchestrated by the Federal Reserve that undermines every tenet of Liberty and free markets. The American system has never been more corrupt.

And because of that never before in American history has the economy factored so little into the value of stocks – and that’s because of the central authority’s intrusion into the stock market via QE. Take a look at the historical value of stock prices relative to Gross Domestic Product (GDP) in the chart below. Valuations are absurdly high with absolutely no economic justification. 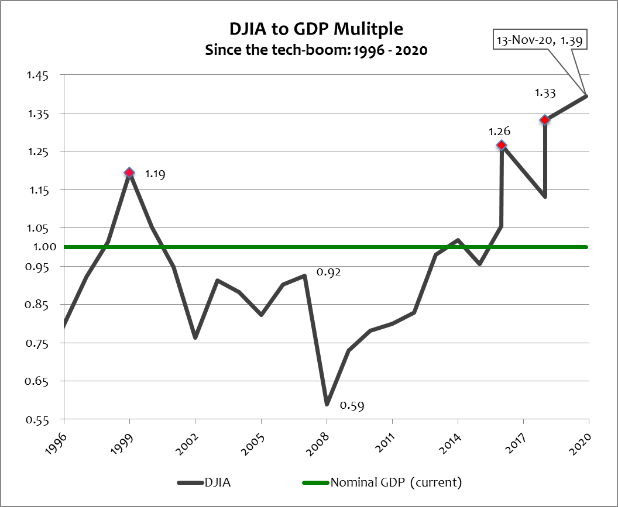 Ridiculous valuations when you consider Trump’s economy was never close to the performance of Clinton’s tech-boom in the 1990’s, and Biden’s vision has no chance to outperform Obama’s mediocrity let alone Trump’s livelier pace.

Yet right now, in the Covid world, with presumably Trump leaving and Biden arriving, with an economy still in recession (-4%), with unemployment still high (7%), with a spark of inflation in Q3 that is poised to catch fire (3.9%), and with the looming threat of more stifling shutdown orders and mandates, higher taxes, and easier international trade policies (which hurts American employment), stocks are valued 17% higher than the peak of Bill Clinton’s energetic .com economy – and 34% higher than the last time the economy was at this level (Q2 2019), when it was healthy, stable, growing, and long before Covid-19 swept into town. In the chart below take special notice of the drop in 2020 GDP and the stock market’s reaction to it. 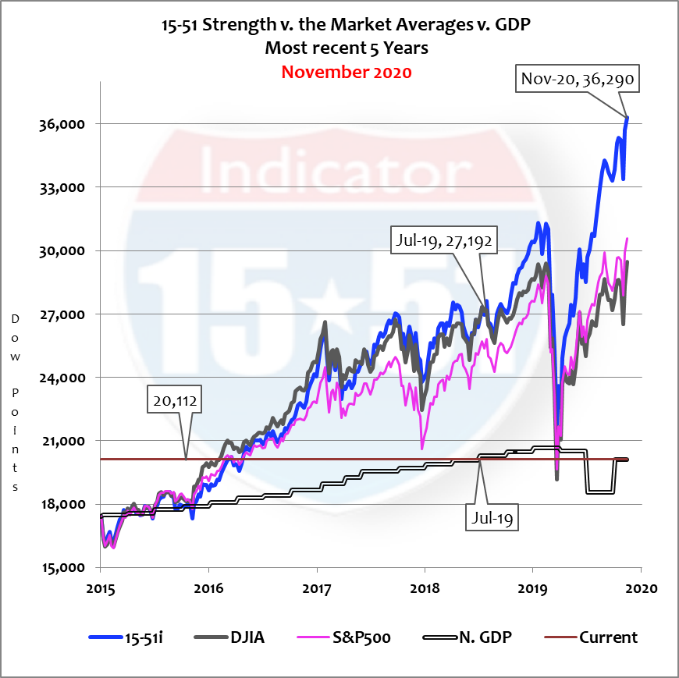 Stock values are solely being driven by the Federal Reserve’s ability to print as much new currency as it wishes without forcing yields higher. Once that dynamic changes the stock value bubble will burst.

Inflation, now on the economic radar, is the key to it all. There is a ton of it already in stocks, which in the old days represented a forward indicator of economic condition. Not so much anymore.

Caution to those who see 4% Q3 inflation as just another anomaly and no big deal, as the stock market may suggest. Indeed, we have come close to that level of inflationary threat before and nothing ever came of it, most recently in Q2 2018. However, the time before that was in Q3 of ’08 – more than 10 years earlier just as the housing-boom was collapsing and what many people refer to as the “financial crisis” was just beginning.

The point to takeaway here is that near 4% inflation is not a common thing in modern day America – all hell will break loose should the pattern continue. The chart below is a 10-year trend of the quarterly inflation rates (annualized). 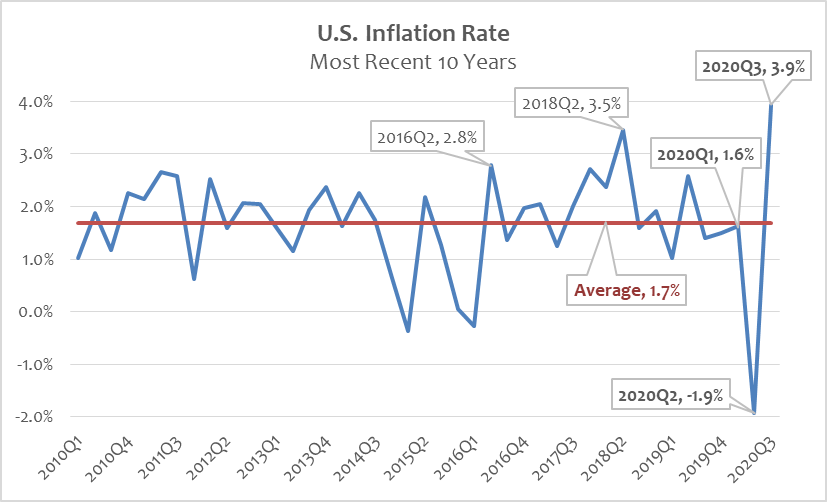 Yes, I know – it’s the Covid year, and in Q2 the U.S. experienced 2% deflation – which is equally as rare as a 4% inflation rate, perhaps insinuating Q3 was just a correction to the other side of the equation in this crazy year. But what does that tell you?

It tells me that we are in a different world with the same problems that have compounded, and continue to be parlayed, with sharper and more dramatic effect.

And Wall Street neglects to see it because they are blinded by the bounty of a world with limitless QE, and all the wealth and power that free money buys.

All investor eyes should now be on Q4 numbers – and what happens with this embarrassing election process. My cat can count faster with more accuracy. Stocks should have sold off because of it. But then again, why would such a silly thing as electoral integrity and political turmoil matter to investors?

Now more than ever — stay tuned…