It’s been a while since I opined on the current state of the markets and that’s because the only thing that has changed is my level of disgust with the world – especially with the news media, who echo false claims made by so called experts as if they are hard, fast, and true. Facts, science, and history mean nothing to them, hence the reason they are hell-bent on changing all three. Government sponsored propaganda is what they’re all about, and it’s not doing We the People any good.

Even more unsettling is the Republican timid rebuke of the hard charging radical Left, who represent nothing democratic in their pursuit of a government ruled by one authoritarian Party directing a centrally planned and controlled economy – also known as communism. Because that is the position of the Left the other side of the equation is automatically placed on the right side of the argument. Yet even armed with the winning formula Republicans are impotent to rally a challenge because they are incapable of advocating individual Liberty and free-market principles as the alternative solution to market woes caused by big government policies.

So please tell me, How can that be good for stocks and the global economy?

Today is an America so polarized and so divided that some believe central government is constitutionally powerless to halt the practice of carrying a baby to full term, delivering it, and then killing it in the name of a “right to privacy” that was established by a 1973 Supreme Court case regarding abortion.

Roe v. Wade began the “my body my choice” campaign that removed governmental powers to stop medical treatments like unfettered abortion should it be a person’s choice to have one performed. Yet today many abortion advocates believe it is well within government’s power to force experimental medicine into all peoples’ bodies without their consent and against their freewill. Ditto for mask mandates that run contrary to an individual’s objection for a myriad of legitimate reasons.

How can government be powerless to stop infantile murder but be fully empowered to indiscriminately use humans as lab rats?

For decades Democrats have been spewing about the evils of big business – how bad and corrupt they are, driven only by greed and profit for the wealthy, while impoverishing the average worker and enslaving the poor. If that weren’t the pot calling the kettle black back then it certainly is right now. They always work together and play together, regardless of their public rhetoric.

No better example of this is Biden’s effort to co-opt his big business partners to enforce his national vaccine mandate through public pressure and coercive policies like high-dollar fines for non-compliance that strip individual freedoms, threaten the healthcare system, force many onto the unemployment rolls, while adding further pressure to an already stressed post-Covid economy.

It is important to remember that big business represents the donor class to the ruling class (politicians). Big money is therefore on an endless move from big business to big government, and then from big government to big business, all directed by the political whim of the current condition.

For instance, today it is plain to see that big government funds big pharma research, who then create viruses and vaccines for them, in exchange for political kickbacks, policy compliance and reinforcement – regardless of whether those policies are good for individual health or not.

And when you have a government that throws around trillions of dollars year-after-year, and one that is hell-bent on taking control of the healthcare market (because then they can control everything you do in the name of public health and safety), any monkey can logically expect a bunch of that money has to find its way into the healthcare system.

To take it over they must first buy it out.

That is the definition of government healthcare, where politics is more important than health, thanks to Obamacare (a.k.a. the Affordable Care Act) – a law that apparently made human experimentation legal and vaccines free.

So yes, some stocks can and do benefit from abhorrent government policies because they are being greased to carryout government policy. Crony capitalism is socialism at its core, which needless to say, is highly inflationary.

Poor central government policy that is driven by irresponsible spending has no choice but to cause inflation, which has been evident in the stock market for more than a decade now. The reason inflation didn’t previously present itself in the broader economy is because the vast majority of the “stimulus” money remained at the institutional level – Wall Street banks, unions, and select market segments like education and healthcare.

But when government shifts its spending focus from institutional players to individuals as it did with Covid programs, inflation has no choice but to appear in Consumer Prices (CPI) or the broader economy (the spread between Nominal and Real GDP). It is important to remember inflation is not growth, it represents the growth in money supply and the loss in purchasing power. See below. 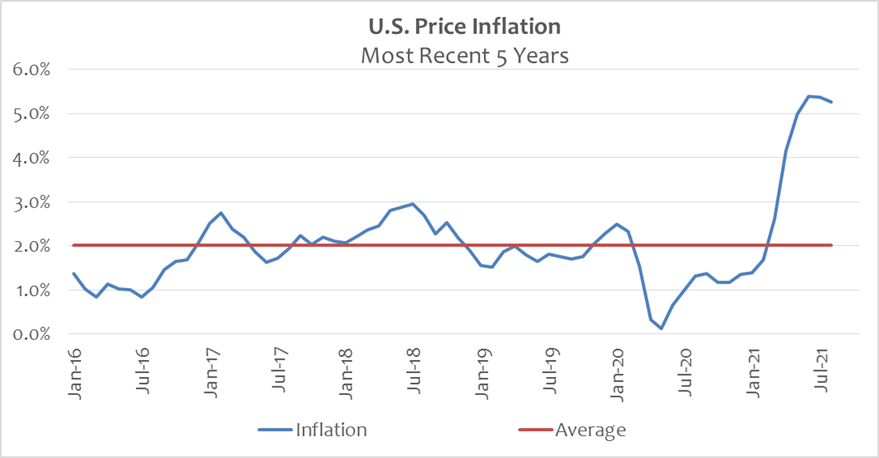 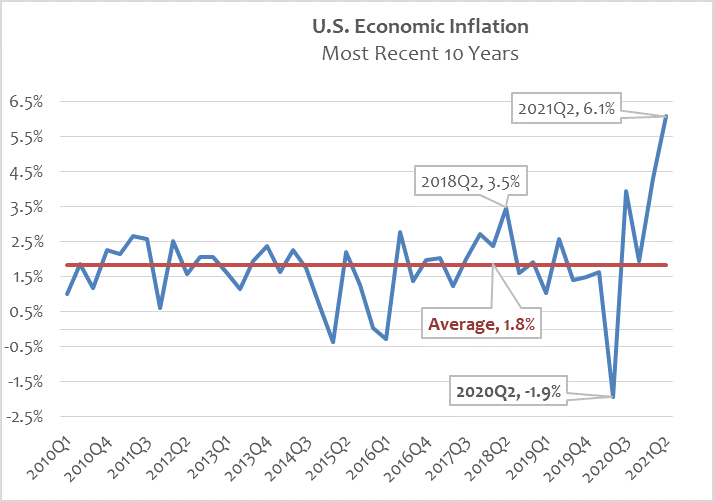 The surge in prices was also reflected in the stock market. See below. 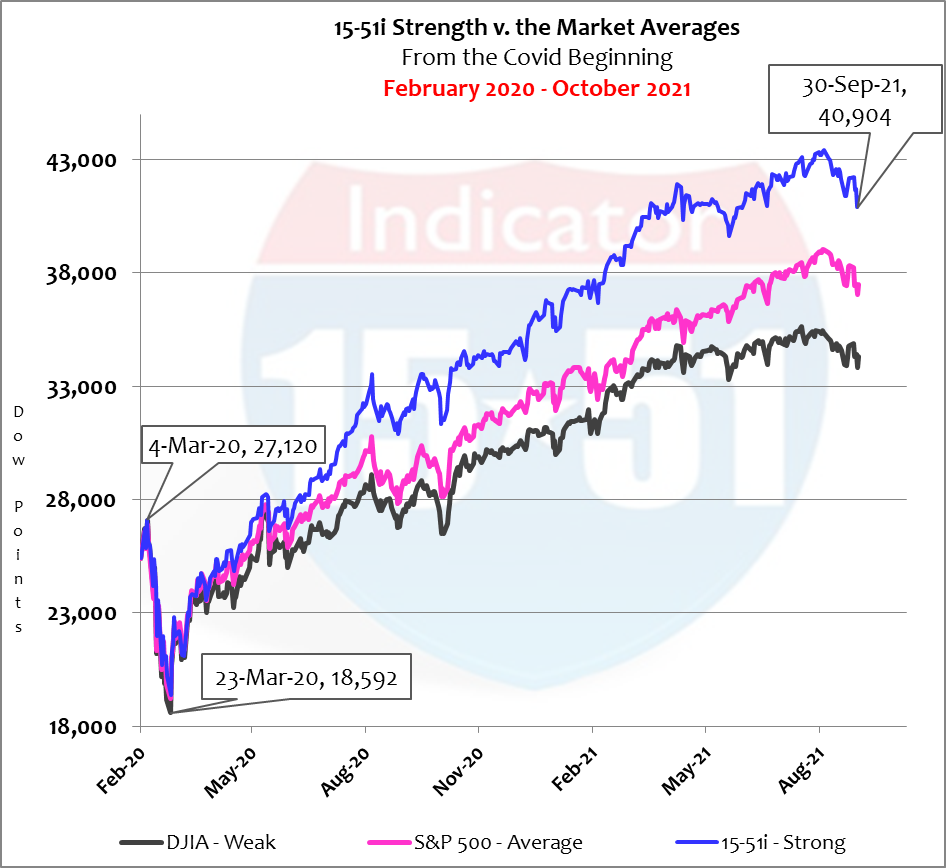 So government shut the economy down in March 2020 and the stock market corrected, losing some 30% in value. Markets slowly reopened over the course of the next several months and by June 2020 stocks had regained their pre-Covid levels.

The economy, however, did not regain its pre-Covid level until the first quarter of 2021 – but it was one rife with inflation (see chart above) and employment and supply chain issues that continue to this very day. Despite that economic reality stocks have more than doubled since their Covid bottom (+120%, as shown above).

Because the Federal Reserve rejuvenated its easy money policy called quantitative easing (QE) in response to the Covid plandemic. QE is the only thing buoying the markets at these levels.

The first ingredient required for the use of QE is irresponsible government spending that creates large fiscal deficits, which in turn creates the need for massive new issuances of government bonds (how governments finance their cash shortfall). The second ingredient is for the central bank (Federal Reserve) to want to keep interest rates low (you know, to save the world from “crisis”).

In a market-driven economy bonds go out to auction via the Wall Street establishment, and if there is insufficient demand for them, yields (a.k.a. market interest rates) rise to make bonds more attractive to investors. But when the central bank wants to keep yields low they print twice the amount of new money required to purchase excess bonds to keep yields low. So half the new money laundered through Wall Street is earmarked for U.S. Treasury securities and the other half could be used any which way (some of which finds its way into the stock market) – that process is known as the “bond buying program” called quantitative easing (QE).

QE is a modern day scourge and Ponzi scheme used to take-over major sectors of the U.S. economy – banking, academia, and now healthcare, and soon to be energy if the “infrastructure” bill were to be adopted into law.

The Federal Reserve is facilitating a leveraged buyout of the free-market system under the guise of crisis measures to “save” the economy from manmade perils that include the banking debacle in 2008 and now Covid-19 – both of which were created by bad government policy.

But now that inflation is on the rise our Federal Reserve and the European Central Bank are discussing tapering their end to QE in early 2022, action often met with a stock market sell-off called a “taper tantrum”. Reason for the taper is because central banks need to remove excess currency they injected into the economy to halt the advance of inflation as shown above.

The end of QE will push yields higher because massive central government debt and deficits have no end in sight. In other words, the supply of bonds will continue to rise and demand will shrink because the Fed is no longer printing demand via new money to buy excess bonds. With rising inflation and lower demand yields will spike and send Wall Street into a tizzy, at which time they will blame the Fed and the Fed will blame inflation and both will be scratching their heads.

It will be a different year and a brand new crisis featuring the same old bad actors, promising once again to save the day with more big government. It is a show no one wants to see but everyone will experience. The solution to it is simple: term limits for Congress and a balanced budget – mandates from We the People.

It’s the only way the show won’t go on.