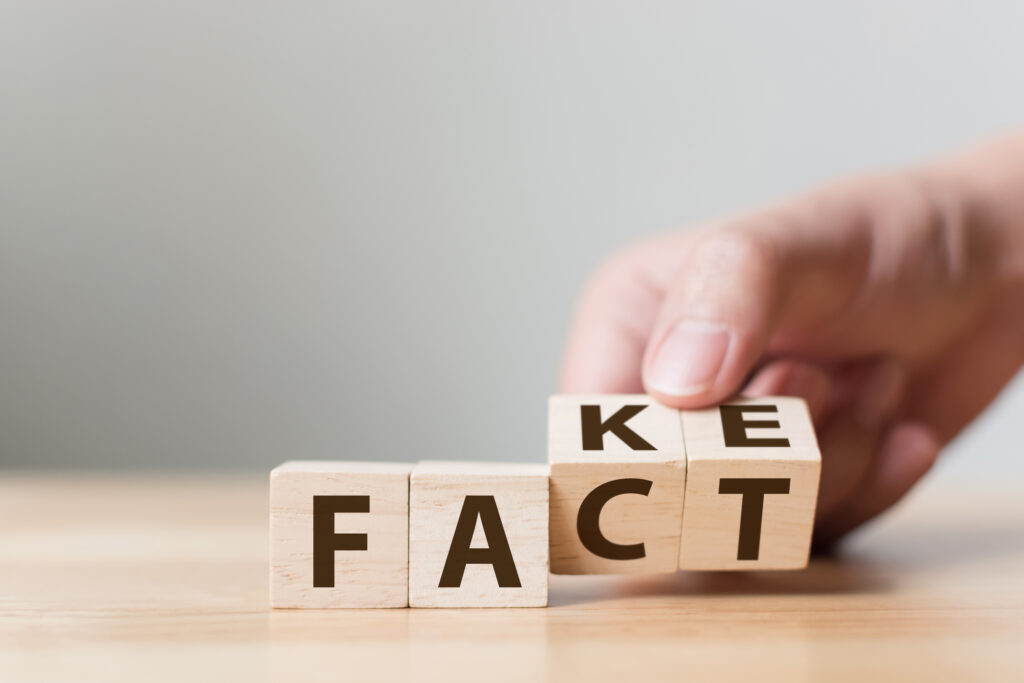 The lunacy in last year’s investment markets can be epitomized by the ever growing disconnect between real economic activity and the stock market, also known as the difference between Main Street and Wall Street. In a world with little sanity and logic the stock market is a great benchmark. But for all others the bond market is the best indicator of the economic tide.

Gross Domestic Product (GDP) has continued to pace at just 2% growth annually, which is the economic norm since recovering from the Great Recession more than ten years ago. This time around, however, the inflation rate is more than three times higher than anything we’ve experienced in the last several decades (7%). That level of inflation is a threat to real growth and can easily lead to recession – not to mention much higher interest rates that will add to pricing pressures – none of which is good for stocks.

But the stock market didn’t care to notice again in 2021. 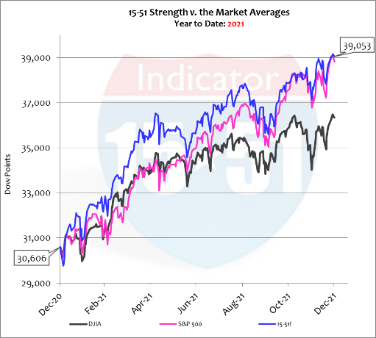 The rise in 2021 stock prices signifies two important characteristics in today’s Covid world: 1) government policies during the plandemic favored big businesses over small, as their profits continue to soar, and 2) current stock prices are incredibly inflated due to big government policies (namely QE) and therefore are more reliant on them, making them less related to economic activity and its underlying condition. And there’s your disconnect.

In times like these investors are best served by believing their own eyes, questioning everything, and making sense of it all. It’s the only way to be comfortable with your portfolio, your investment plan, and in fact, investing in general.

Gold continued to contradict logic by uncharacteristically losing value (-4%) in the highly inflationary period that 2021 was – which, like the trend in stocks, also didn’t make much sense.

Gold is a precious metal that has long been used to back trade, which is simply currency exchanges for goods and services. When currencies that purchase gold get weaker (due to inflation) it takes more dollars to buy it. And so logic expects gold to rise during inflationary times, another 2021 anomaly.

So stocks and gold defied reason last year, but that’s nothing new. Markets give mixed signals all the time, and many times can do so irrationally. Investors need to be aware of it, and appreciate them for what they’re worth. Understanding market movements helps identify opportunities and threats to your portfolio.

Both stocks and gold are skewed byproducts of the Federal Reserve’s continued abuse of their easy money policy called quantitative easy (QE), a modern day scourge and the greatest threat to the American ideal.—But God forbid anyone talk about it. Instead it’s all about mask and vaccine mandates, race-baiting politics, and biased demagoguery of all dissent – all of which distracts from the real issues at hand.

Of all major market indicators the bond market is the only one telling the truth – which is so nice to see in this lying thieving world that big government created. Bond yields (what lenders determine as fair return (interest) via market activity) are on an upward trend suggesting higher interest rates in the future – something logic would expect in a highly inflationary period. 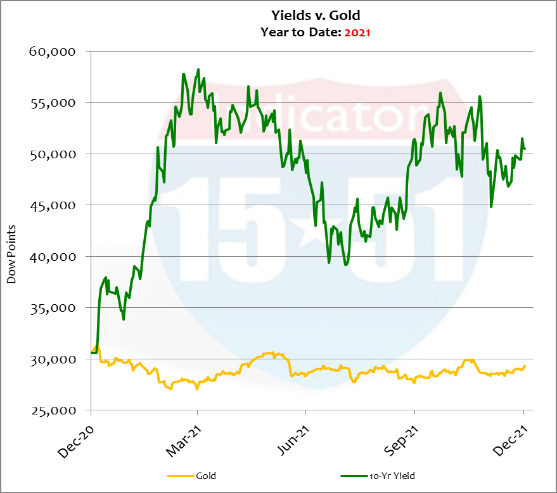 Bond values run in the opposite direction as yields and, as you can see, got crushed last year. And while the increase in yields was sharp, the 10-Year yield ended the year at just 1.51%, which is still low by historic standards. So there is a long way for them to move higher before topping out – especially with inflation running at 7%. These are things bond investors should appreciate.

As we know, gold was down (-4%) in 2021 when it should have been up (due to inflation). Market anomalies can trigger a portfolio action point. For instance, if the rise in stocks caused your gold allocation to fall short of target it might be a good opportunity to add to it – just as it might be a good time to sell some stocks should their 2021 rise have thrown that allocation out of whack.

Investing is a fluid process.

In the current economic condition in America – high inflation, slow growth (with a Federal Reserve promising to raise interest rates to slow it down further), and substantially lower labor participation than before Covid – both yields and gold should have been much higher in 2021, and stocks should have been lower or only modestly higher. But that logic works only if the economy was the main driver of investment market activity, which it was not.

Again, government policies – not economic activity or condition – are mostly responsible for markets moving the way they are.

That said, it is important to know that the Federal Reserve is planning to end its bond buying program in March 2022. That is important because the Fed is an extremely large buyer of U.S. Treasury securities (bonds) – activity which has been keeping yields artificially low. Once gone things change dramatically in the bond market – especially if Biden continues to spend like Trump on steroids. Bonds are how central government finances their deficits, and so things become very interesting when the Fed stops printing money to cover central government’s nut (a.k.a. quantitative easing, QE).

Deficits are a means to an end for the communists now controlling American government – and Covid-19 and its variants are government’s justification for them. Over $6 trillion of deficit have been created in the name of Covid-19 relief spending – and what do the American people have to show for it?

Answer: key supply shortages in Covid testing equipment, restrained supply in life-saving therapeutics like ivermectin, hydro-chloroquine, and monoclonal antibodies, shortages in healthcare labor, which caused a rationing of “non-essential” healthcare services, and spawned a race-based criteria to receive care.—That’s what we, the American people, got for the “investment”…

Along with an abundance of “free” experimental drugs deemed mandatory by world governments advertised as a “vaccine” that neither stop the spread nor eliminate the symptoms. These non-effective antidotes are delivered to a coerced world market with full immunity for their big pharma manufacturers, because the “vaccines” have not yet been thoroughly tested. In other words, no one knows what side effects will present themselves in the future; yet it is certain that victims will have no recourse even if “vaccines” prove to another Agent Orange.

Even with that real possibility, citizens are pressured, bullied, and stripped of rights to take these experimental drugs regardless of efficacy, side effects, personal choice, or pre-existing health condition – a mandate power Supreme Court Justice Kagan believes the president constitutionally has as long as “vaccines” are “free”.

First of all, there is no such thing as free – especially when it comes to government.

U.S. government is printing new money via QE to purchase enough “vaccines” to service the world, generating a surge in profits for big pharma and their donor-class friends – including their congressional-selves, and as we find out, a whole lot of self-serving judges. The cost to that monetary expansion is called inflation, a tax on money paid by all who buy anything, which was created and deployed by poor monetary and fiscal policies.

The American consumer is paying the freight for all the “free-stuff” – via inflation, taxes, and government debt servicing.

Making healthcare affordable and capable to adequately service the populace is a noble cause for government. But the Affordable Care Act (ACA) had nothing to do with making healthcare affordable or more capable. It was just a catchy name, as is so often then case in government. Instead, the ACA was drafted to take control of the healthcare industry via leveraged-buyout using crisis funding to effectuate the transaction. All you have to do is read the law to know it.

Covid-19 was that crisis, the impetus government used to force a single-payer healthcare system where mandates, rationing, and political whim take precedent over individual health and free-will because government is making payment for care, and because of it, privileged to mandate all medical protocols.

The ACA provided a bailout provision and the mechanism for payment for no other reason than to gain control of the healthcare industry, something central government learned how to do during the last manmade crisis back in 2008, when the concept of QE was born, and then used to take control of the entire financial industry.

Today trillions of dollars are being printed and injected into the healthcare system (also via QE) but none of it is earmarked to make healthcare more affordable and/or more available to more people. Its purpose is to finance a leveraged-buyout of the healthcare system by using Covid-19 as justification, so that government can control people and behavior through healthcare.

Case in point, today QE money is used to: 1) pay-off health officials and service providers to enforce government mandates and sponsored treatments, and 2) to purchase government’s chosen therapeutics in bulk (thereby making those manufacturers and their investors rich) and forcing them upon a coerced global market. This effort, make no mistake, has nothing to do with good health and all to do with taking control of people through the healthcare system, using crisis to assert their authority, and the ACA as standing to do so.

There can be a legitimate government role in the healthcare system, but please don’t tell me what drugs I must take, what treatments I must have, and what things I must do in order to get equal access to healthcare services and the market at large. That’s a bit too communist for freedom loving people everywhere. Expand the supply side of the market instead, and let demand for goods and services be decided unfettered by patient and doctor.

For instance, if hospital pressure and not enough available beds to treat the infirm are the real issues then a worthy investment for government is to finance the building of more hospitals, equipping them, and offering educational grants and scholarships for nurses, doctors, and healthcare administrators – that is, to increase supply so that prices and can naturally move lower to equilibrium.

Americans need to stop fighting each other and instead take the battle to the real culprit – tyrannical big government and those who finance and support it – on both sides of the aisle or in between – Democrat, Republican, and the supposed bipartisan Federal Reserve.

We must demand an end to the practice of QE and trillion-dollar annual deficits because it is those deficits that trigger the Federal Reserve response called QE – the source of a debilitating condition called runaway inflation, which is being used to finance the takeover of another free-market industry segment (this time healthcare), while diminishing the rights of people and free-market activity.

Government healthcare is now in America.

America needs a course correction (End QE and Repeal Obamacare) and a recession in the size and scope of big government and their according budgets — to halt their inflationary impact on prices, corporate profits, and stock market valuations, which can be easily appreciated in the chart below. 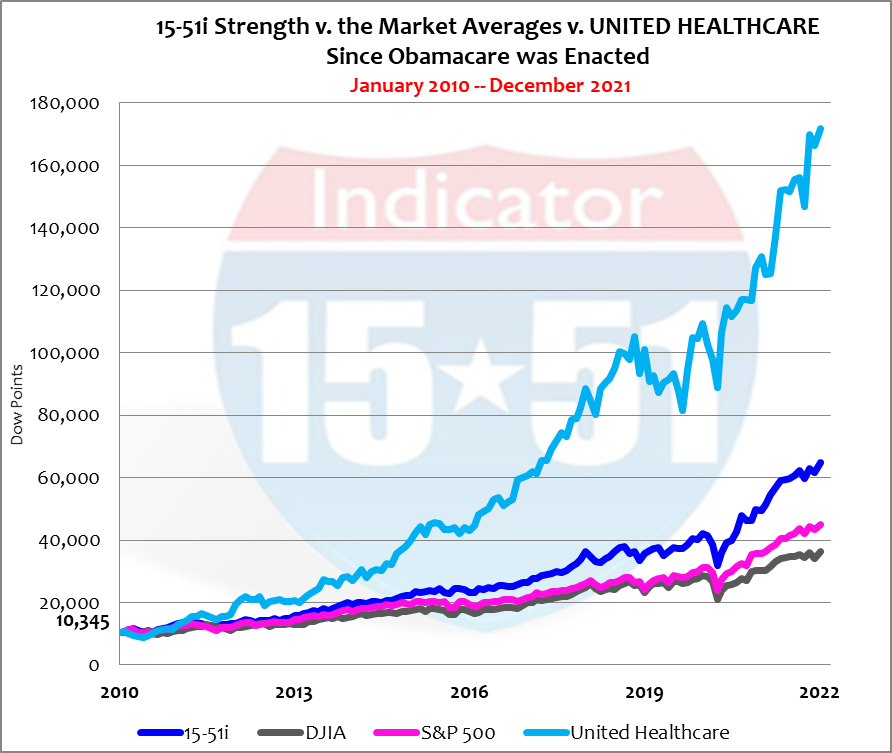 To take it over they must first blow it up (with a ton of QE money that causes unbearable inflation to the point of collapse), to create the crisis from which to bail it out, and complete the takeover.

How long before we hear, “Medicare for all”?