The only reason the whole MEDICARE FOR ALL thing has any mojo is because there’s something seriously wrong in the healthcare and medical insurance markets. The Affordable Care Act only exacerbated the faulty pre-existing condition of those markets. The law misplaced billions of dollars to no avail while screwing taxpayers, consumers, and service providers in favor of freeloaders, bureaucrats, and insurance companies.

Let’s start with some basics…Governments control markets through laws and regulations, tax policy and interest rates. Their policies change Market conditions and dynamics, and thus affect corporate performance and stock prices. This can be evidenced by showing how the healthcare insurance market performed while operating under the Affordable Care Act (a.k.a. Obamacare). Allow me to demonstrate…

The Affordable Care Act was rammed home for Christmas in 2009. And although it began taking effect in March 2010 the law was implemented in phases, with the first significant stage arriving after the law cleared courtroom challenges in 2014. You may recall that the law was advertised to save families on average $2,500 per year – a fallacy only Kool-Aid drinkers could possibly believe at the time – as it is economically impossible to expand demand by tens of millions under level supply and effectuate lower prices. Reality just doesn’t work that way.

It is equally obvious that it is impossible to lower healthcare costs to consumers (or make them more “affordable”) when a main intention of the law was to raise deductible limits and co-pays. Obamacare demonized low deductible and nominal co-pay policies as “Cadillac plans” and either made them illegal or entirely unaffordable. Such action had no choice but to raise costs to individuals.

The Affordable Care Act was a fraud from the very beginning – proof of which can be seen vividly through a stock market comparison. Four trend-lines appear in the chart below: United Healthcare (an indicator of the healthcare insurance market), the 15-5 Indicator™ (indicating stock market strength), the Dow Jones Industrial Average (representing the stock market average), and GDP (which is the actual market economy, or the total activity for all markets). The time period covered in the chart begins with the enactment of the Affordable Care Act (ACA) in 2010 and extends through today. It’s a nine-year period. First the picture then the analysis. 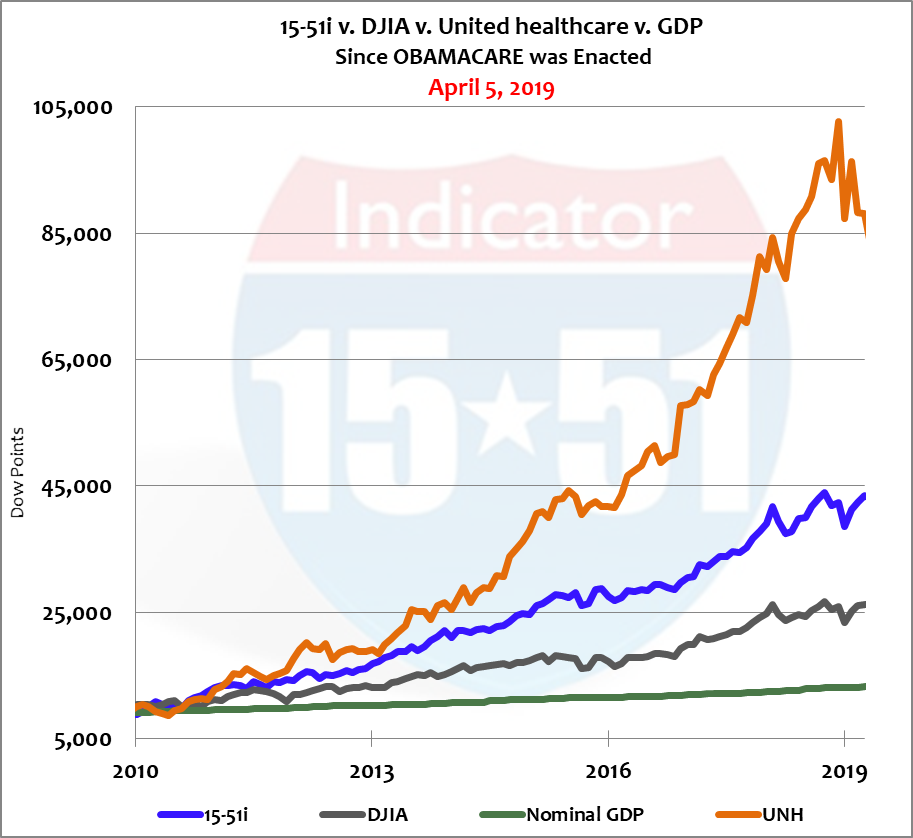 The bottom green line is GDP, which besides the economy, can be viewed in this exercise as the actual base price of all goods. It grew 41% during the nine-year period, or 4.5% per year. Of that number 2.4% was growth and 2.1% was inflation. In other words, Real annual growth was 2.4% and average prices increased 2.1% per year. Remember that, actual prices up 2%.

The Dow Jones Industrial Average is a stock market indicator of the economy (GDP). Consider it also the average price and the average movement in price. It grew 147% during the Obamacare period, or 16% per year. Or put another way, the average inflation rate of stocks was 16% during the ACA era, because inflation is defined as the general rise in prices.

The 15-51 Indicator™ produces an above-average price trend because it is comprised of higher performing stocks in higher performing industry segments. It posted a 377% nine-year return, or a stunning 41% per year. Consider it also a premium-pricing index for quality brands of goods and services. That is to say premium prices rose at a rate 2½ times greater than the average (41% versus the Dow’s 16% per year).

Healthcare, via United Healthcare (UNH), posted an eye popping 763% inflationary gain over the nine-year Obamacare period, or 83% per year – an amount twice the 15-51 Indicator’s™ premium price performance, and 5 times greater than the Dow’s average price increase.

Healthcare inflation is so far out of whack from everything else in the economy the Affordable Care Act should be repealed based solely on that condition. The chart above tells that story vividly, as the United Healthcare trend illustrates the jump in healthcare costs to consumers for premiums, co-pays, and deductibles, as a result of the disastrous Obamacare legislation.

But it gets worse.

In the year prior to the enactment of the Affordable Care Act (2009) United Healthcare’s net profit was $6 billion. Nine years later (2018) their bottom line nearly quadrupled to $17 billion. See chart below. 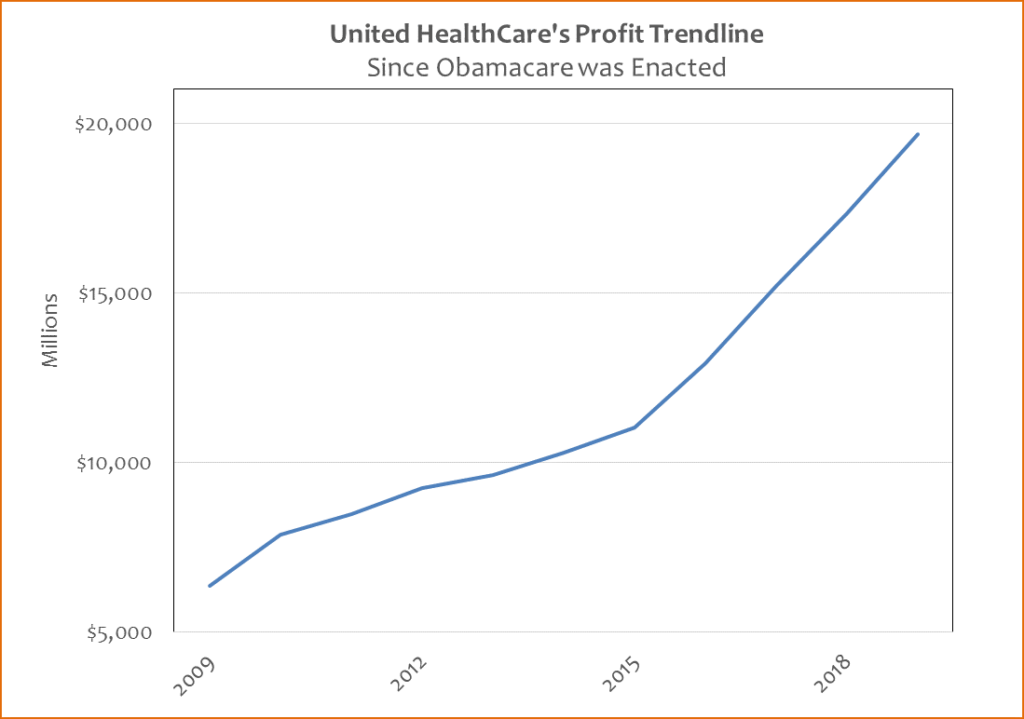 The Affordable Care Act did that.

And investors should have expected it.

My blog entitled, SUPREME LETDOWN, was posted after the Supreme Court’s first horrible decision to uphold the corrupt Affordable Care Act – corrupt because it had no choice but to defy its name and dramatically raise the price of healthcare to consumers (those who pay for insurance and care). It also had no choice but to stuff money into the pockets of insurance companies because besides lifting deductibles and co-pays for consumers the law also provided for greater government subsidizes of healthcare insurance to a greater number of persons.

In other words, prices to consumers increased dramatically at the same time government contributions (subsidies) also skyrocketed. That dynamic flooded the system with an abnormal amount of profit (as can be seen in the charts above), which is what inspired me to close the aforementioned 2012 blog with, “The ‘healthcare boom’ starts today – and that includes price inflation.”

Like LETDOWN, blogs like THE FARCE OF MEDICARE FOR ALL and AMERICA NEEDS TO WAKE UP are policy driven blogs. Understanding the connection of government action to stocks is the best way for investors to be ahead of “the market”, maximize opportunities and minimize risks. Party politics mean nothing to investors. Public policy matters greatly.

Free-market capitalism produces greater long-term investment results than any other market model. Policies that denigrate it corrupt markets and drain incentive, wealth, and individual liberty from the marketplace.

Many on the political Left erroneously paint all free-market capitalists as anarchists – those who advocate a total lassie faire government approach to enterprise. Nothing could be further from the truth, of course, as even the most ardent free-marketeers believe in the need for government involvement for veteran and senior citizen healthcare. The government must have a role in healthcare, but it must be measured and limited in scope (my recommendations start here.)

Those who stand against the Affordable Care Act now do so not for political reasons but because it has proven to be as fraudulent as much as a failure. It made healthcare more expensive to all and did little more than stuff more money into the pockets of administrators and insurance companies. It broke a broken system even worse, and by so doing fueled a movement for a complete government takeover of the entire industry, i.e. MEDICARE FOR ALL.

The healthcare and according insurance market are a failed socialist system and should be labeled as such. Calling it a capitalist or a free-market failure is blasphemy. There is nothing free about those two markets. Obamacare made certain of it.

The unmitigated success of United Healthcare in the Affordable Care Act era is the most glaring indictment of Obama’s deteriorating legacy. His law made insurance companies richer on the backs of the small business owner and middle class worker.

The answer is not more government but less. United Healthcare is proof positive.