Investment is more of a discipline than anything else. You must have rules and boundaries – and you must honor them, or else they don’t exist.

In my book I mention my rule not to invest in public equity stocks with prices less than $15. It’s a hard and fast standard, and something I just won’t do. Another bedrock principle in my market-driven approach is a rule I call “10-and-3” which goes hand-in-hand with the 15-51™system and a multiple asset class portfolio.

The greatest benefit of employing a defined diversification and allocation method is that they make portfolio issues easier to identify and decisions easier to make.

For instance, my base portfolio is comprised of three asset classes: cash, gold, and stocks. As you know the stock market has been on an absolute tear lately. Stock market strength via the 15-51 Indicator™has gained 21% so far this year and 22% per year since Trump won the ‘16 election. It’s up 66% thus far in his term. The Market Averages have gained 53%, or 17.5% per annum during the same time. See below. 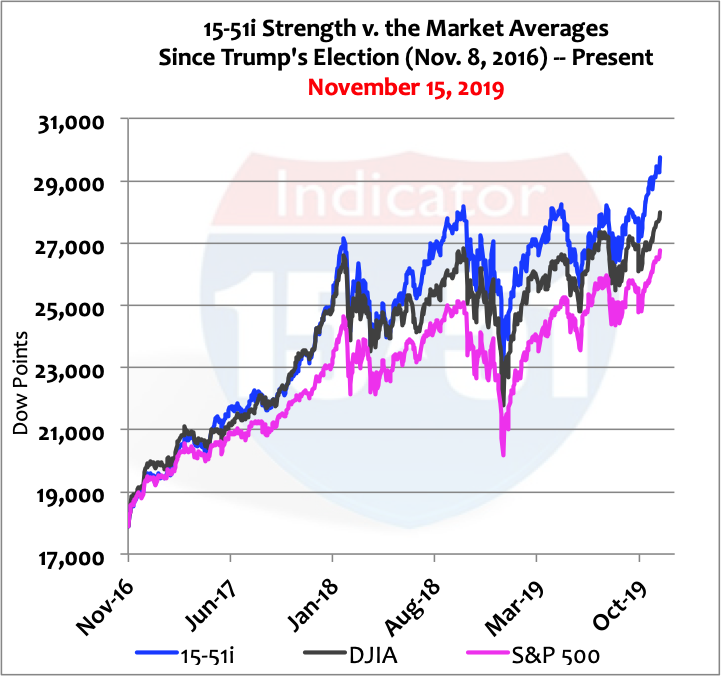 My 10-and-3 rule calls for action when an allocation goes 10 points beyond its target for 3 consecutive months. The allocation can be for an individual stock within the 15-51™system or by asset class.

The strong stock market performance has pushed my asset class allocations almost to a point of re-balancing.

Right now my individual stock allocations within the 15-51™ system are all inside my 10% rule (Google is the furthest from its target, off +4.5%, and the Technology industry is off by +8%) but my overall stock allocation is 10% over target for 2 consecutive months now, or 10-and-2. Should the current trend continue for another month it would trigger a re-balancing event to sell stocks and add to my gold position.

By using actual market activity as a trigger takes speculation completely out of the decision making process. That makes investing so much easier – and profitable!

A re-balancing event is also a good time to re-evaluate your overall portfolio allocation scheme and risk posture. Is your portfolio positioned properly for the current Market condition and its near future prospects?

Looking at the landscape now I just can’t imagine the establishment letting Trump make it all the way through a re-election campaign without a fiscal crisis to face, whether it’s a recession, steep stock market correction, or both. Remember, the USMC trade deal is held up in Congress and the China negotiation looks to be at another impasse with threats of more tariffs swirling – this before it even reaches the congressional floor.

Inaction on trade deals and higher tariffs can easily throw a wrench into economic growth and cause recession.

And because central government spending is such a significant portion of the U.S. economy ($4 trillion against a $21 trillion GDP, or 19%) any reduction in it could also derail economic growth – which grew just 1.9% last quarter (or $364 billion).

Can’t you see a Congress in election and investigation mode so paralyzed they are unable to produce a spending bill in 2020 that would keep the money flowing to prop up the economy just to sink Trump?

The current U.S. federal government budget deficit is $800 billion and that increases national debt by the same amount. And because Trump and the Federal Reserve want interest rates to remain low, or even lower than where they are now, these annual budget deficits will require the Fed to print more money to buy more Treasury bonds (government deficits).

At some point the balloon is going to burst. It always does.

This of course is not to mention that this is the longest stock market expansion in history without a major correction and economic slowdown. Yes, the economy is still growing at a solid clip. But growth is slower this year than last, and the rest of the world – which has never really recovered from the last major meltdown – is fading fast. Political strife is everywhere and economies in the biggest markets in Asia and Europe are slowing and/or teetering on recession, which will ultimately find its way to U.S. shores.

Yet the American stock market has turned a blind eye to it all. It continues to be richly valued and is once again priced higher than the tech-boom with half the rate of underlying economic growth and twice the level of national debt. See below. 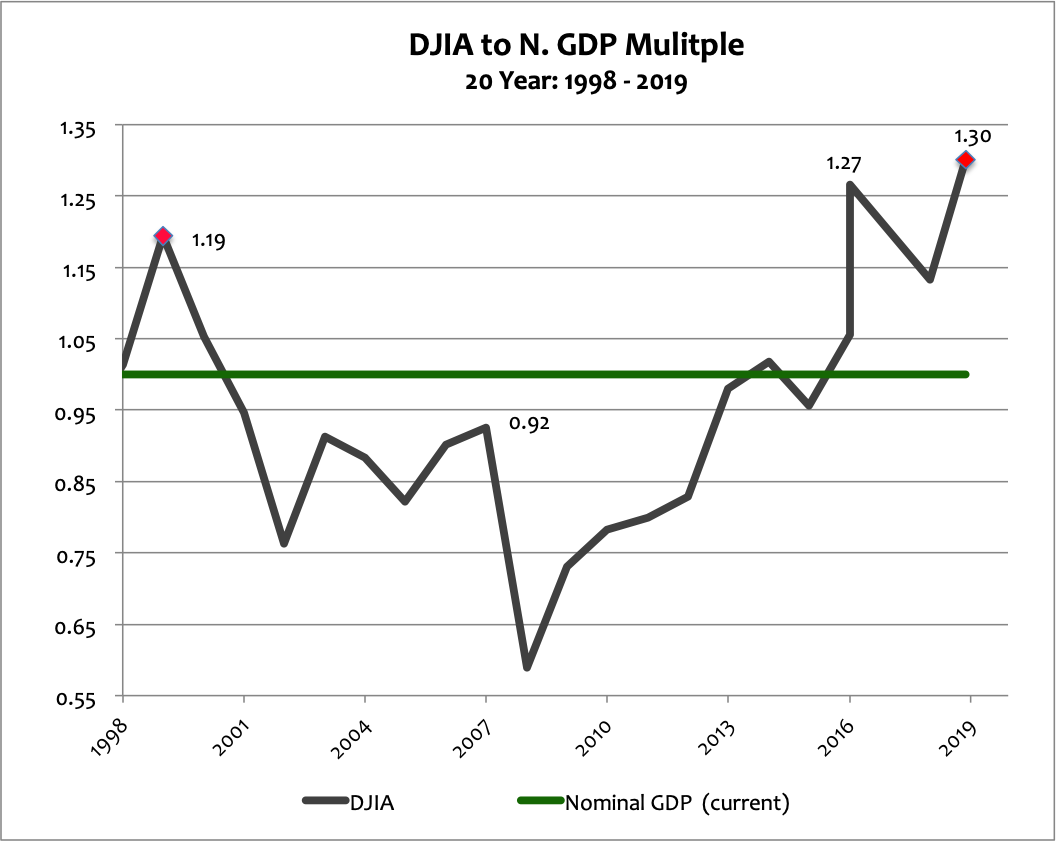 Followers know that my investment philosophy is against being all-in or all-out of any core asset class because that makes it harder to know what to do and when. Multiple asset classes make it so much easier – but again, you need rules and definitions to facilitate the decision making process. Below are mine.

Investment, stocks, business, and simply how to make money, is defined as buy low and sell high. Profit is derived from receiving more than what it cost to produce.

The time to be most aggressive in the stock market is when it is near its bottom after major correction. The economy is usually in or heading to recession at that time. That is the beginning of the stock market cycle (BOC) – and where all the easy money is to be made. Gold is usually still a good bet at that time but I like having at least 10% in cash all the time, just in case.

Superior 15-51™ design affords the investor the opportunity to earn above-average returns with less risk, which is the reason I throttle back my stock market allocation once the economy recovers and begins to expand consistently. And when economic growth starts to slow later in the expansion I move to a conservative posture before getting defensive at the end of the cycle (EOC) when stocks are high – which is where we are right now.

And so my portfolio’s posture will shift from conservative to defensive at the next re-balancing while the wait for mayhem inches along. This management approach produces more robust results in the beginning of the cycle when downside risk is less, and yields slightly less returns at the cycle end when downside risk is greater. Object: more reward early when risk is least, and less reward late when risk is greatest.

And what does that performance look like over the course of the entire cycle? 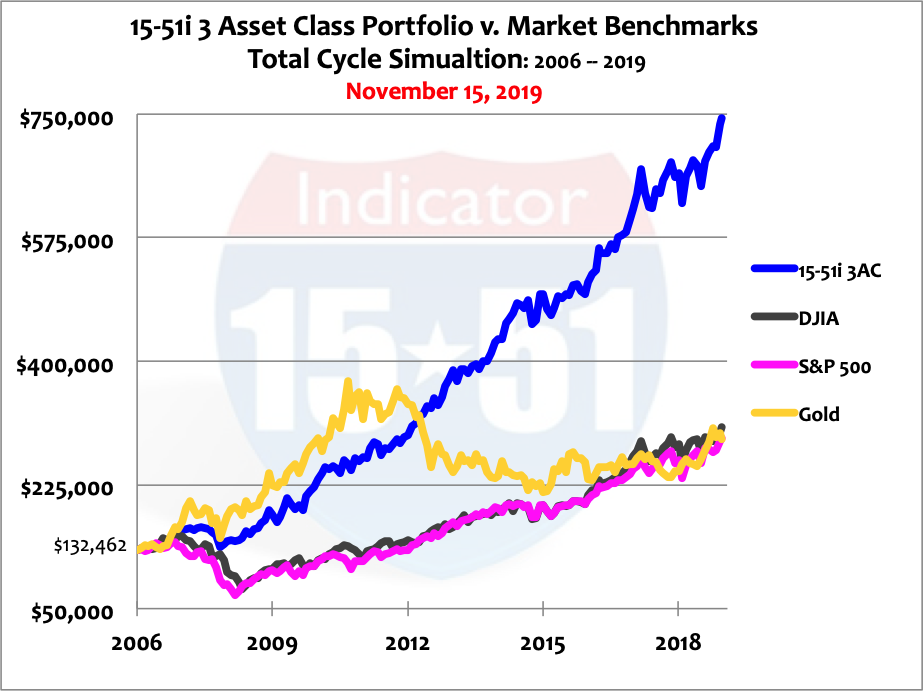 Do that three or four times over the course of your working life and all of the sudden your retirement is everything you hoped – and the road there was more rewarding and had more peace of mind.