The last time a major correction was unfolding right before my eyes I was four years into writing the first edition of LOSE YOUR BROKER NOT YOUR MONEY. The first several drafts contained extensive analysis that forecasted the major correction that was developing as the housing-boom approached its predictable end. And then bang, it happened. It took three more years to deliver the rewritten manuscript to market on July 4, 2011, more than two years after stock prices reached their cycle bottom.

Former CNN Headline News pundit Glen Beck was the first public personality I saw wave the red flag warning of the oncoming calamity. Back then Beck was telling a story about a conversation he just had with his financial advisor – a man, Beck said, who had just called him crazy. The label was given because Beck had just instructed the broker to sell all of his stocks and buy gold with the proceeds. It was 2006 – and more than a year before the stock market climaxed in October 2007.

Beck wasn’t crazy. He was early.

Major market events like the one evolving today take time to materialize and fully unfold. Stock market craziness fires flares early and often affording investors plenty of time to adjust their portfolios so that they could capitalize on major buying opportunities. The reason Glen Beck – a political analyst – was able to predict an opportune time to shift asset allocations is because he was watching what central government was doing and logically assessing its impact to the economy, and then translating it to the investment markets.

That’s the way to be ahead of the game.

Beck’s early move paid huge dividends as the price of gold nearly doubled from his pivot to the time stocks finally reached their bottom a few years later in March 2009, when stock prices were off some 60% from their October 2007 peak.  He, like many others, knew that gold’s safe haven value rises during times of monetary crisis.

It’s much more profitable to be way ahead than a little too late.

The longstanding investment cliché is to buy low and sell high, not buy at the lowest and sell at the highest. Perfect timing is not a prerequisite for success. A winning formula is.

The importance of a multiple asset class portfolio and a superior allocation model like my patent-pending 15-51™ system cannot be stressed enough. Together, they drive my incredibly successful market approach to portfolio management, which was again featured in my November 2019 blog, ACTION POINT APPROACHING. That blog announced my allocation system was triggering an action to sell stocks and build cash.—It wasn’t perfect timing, as “the market” reached its all-time high a couple of months later on February 12, 2020, but it was pretty damn close. And it was last year’s blistering stock market performance that motivated my actions, not psychic or gut instinct, or some magic algorithm.

Market activity – not speculation or sophistication – inspires my investment maneuvers. And it works. Because there is science behind it.

In a smartly structured portfolio, abnormal inflation in one asset class triggers an action to sell that asset class – in other words, to sell high in rising markets (during inflationary times.) At the same time, the very same trigger also told me to add gold and build cash reserves (the other two asset classes in my model portfolio) because they were underperforming the irrational exuberance taking place in the stock market. Gold is 16% higher than it was back in November. Again, my timing was that good because it was created by actual market activity. All I had to do was look, and act.

Investing is so much less daunting when all the guesswork is removed from the equation. Defined methods of allocation and superior 15-51™ performance are the best and easiest ways to remove that uncertainty and the associated risks.

And you can do it too.

My methods have a proven track record of success spanning more than two decades covering three significant market expansions – the tech-boom, housing-boom, and today’s QE-boom. And while perfect timing isn’t required for success, an understanding of where stocks are in the current cycle is. Only then can a portfolio be placed in a position to capitalize on the next great buying opportunity, whenever it arrives.

Cash is required for that, not a crystal ball.

When will the next major correction arrive?

That most popular question has never been easier to answer. One is unfolding right now.

To think that the stock market has already bottomed and is bouncing off to a new high is to ignore where we are in the economic cycle. The full economic impact of the coronavirus, government’s policies related to it, and corporate profits cannot yet be ascertained or appreciated – let alone forecasted for future periods. One thing we know for sure is that 2nd quarter GDP performance will be much worse than the abysmal 1st – and no one has any clue what the 3rd quarter will bring, due out around one week before the 2020 election.

How’s that for timing?

And then there’s how the rest of the world handles the economic shutdown encouraged by the pandemic, how it changes trade and trade relations, and the value of credit and money. In other words, there is plenty of volatile news yet to affect stock prices.

My first whitepaper, SURVIVING THE NEXT CRASH, was posted in January 2015 when I fully expected the next big correction to arrive by the time Obama left office in 2017. At the time my portfolio was in a defensive position ready to capitalize on the big buying opportunity. But instead, the stock market took-off boldly on the Trump victory.

And still my portfolio outperformed “the market.”

Investing is a fluid process because markets are fluid. Logic then dictates that investment plans should be flexible and appropriately allocated to achieve maximum profit potential while protecting against downside risk. Chapter 9 will show you how easy it is to consistently outperform the Market Averages with a fraction of the risk.

The second most popular question readers ask relates to the value of stock prices – Are they high, low, or fairly valued?

The Action Zone is a tool I created to help investors appreciate the current condition of the stock market. It is the historical range the Dow Jones Industrial Average trades to Gross Domestic Product in up markets, down markets, and on average. The three-tiered range indicates whether stock prices are generally high, low, or “fair” compared to their historical norm. It, along with other valuation models and demonstrations, have been updated and presented herein.

The purpose of this whitepaper is not only to sound the alarm of the coming crash, but to help investors chart a new and more profitable course than costly conventional models. My innovative approach is so simple anyone can do it – and there is no better time to start than the present.

Along with 100 million American mutual fund owners whose average age is 51 years young, this is perhaps my last great opportunity to buy low before reaching retirement. My operational plan to capitalize on the coming crash, Chapter 9, can be found by clicking the icon below. 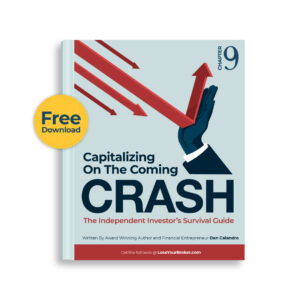